All You Need to Know About Stimulants

Stimulants do exactly what their name suggests, they stimulate the body and mind of the person who injects, snorts, or smokes them. This class of drugs are known for their ability to increase alertness, heart rate, energy levels, and euphoria. While prescription stimulants are used to treat attention deficit hyperactivity disorder (AHDH) and are legal in some forms like caffeine in sodas or coffee, there are other stimulants that become dangerous over time. When someone gets hooked on these illegal stimulants, they often later need substance abuse help. The three main addictive stimulants are cocaine, meth, and nicotine found in cigarettes.

Cocaine is probably one of the most well-known illegal stimulants due to its wide depiction in cinema. This stimulant is a naturally occurring drug that is derived from the coca plant. Cocaine appears as a white powder that can be snorted, injected, or smoked if dissolved in water. The smoked version of cocaine is referred to as crack and produces a more intense, but quicker high.

Compared to other stimulants, cocaine produces the same effects but also increases sexual arousal and confidence. High doses of cocaine have been known to make the user aggressive. Mild cocaine use is able to maintain these pleasant effects, but chronic cocaine use can lead to negative psychological effects like paranoia, confusion, and a loss of normal sexual performance.

Tolerance also builds up the more the person uses cocaine, which actually decreases any pleasurable effects of the substance. Over time, the person may not even feel much of anything when using cocaine. This is what often leads to overdose because the person rationalizes that if they do a little more cocaine each time, then the original high should come back.

Methamphetamine is a lab cooked stimulant that is not naturally occurring and is normally manufactured in homemade meth labs that can be found in a person’s home, basement, or RV. Meth can exist in pill, powder, or crystalized form that looks like rocks when broken up. Like cocaine, this drug can be snorted, injected, or smoked.

As soon as meth enters the body, the person is hit with a sudden rush of euphoria with sudden alertness, energy, and decreased appetite. Chronic use of meth causes more violent behavior than chronic cocaine use because the user is in a state of anxiety and confusion that leads to poor judgment and low self-control. Withdrawal can often worsen these symptoms, which is why many treatment programs supervise detoxification from meth.

How Bad is Nicotine?

Nicotine is another widely known stimulant and the only legal stimulant that people can become extremely addicted to. Many refer to smoking cigarettes as chasing the high because nicotine works by triggering a surge of pleasure-inducing endorphins in the brain. Cocaine and meth can induce a high that lasts hours, but the euphoria experienced from nicotine has a far shorter lifespan. 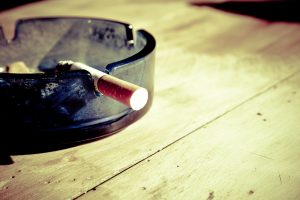 What many people do not realize about nicotine is its similarity to opiates. Opiates also affect endorphins in the brain, which are the body’s natural pain killers. The reason many are saying that it’s harder to quit nicotine than previously thought is because nicotine influences those same endorphins, so now some researchers are saying that nicotine can be as addictive as heroin. This is ironic considering that many people who try to quit smoking do not seek treatment programs as often as heroin addicts.

After years of cocaine use, the person increases their chances of stroke, heart disease, and seizures later in life, some of which can lead to death. Many cocaine users also suffer significant weight loss and damage to their gastrointestinal tract can lead to painful ulcers that may decrease their appetite. Even the way the person uses cocaine can have specific adverse health effects.

For example, snorting cocaine can actually make someone lose their sense of smell which will inevitably decrease their sense of taste because smell and taste are interlinked. This, with painful ulcers, will also decrease one’s appetite and lead to further weight loss.

Meth can lead to a lot of unpleasant physical effects in the user. This includes teeth decay, skin sores from intense itching sensations, and noticeable weight loss since meth decreases appetite. In terms of mental health, the person will find themselves increasingly paranoid over time with confusion and anxiety.

Others may experience hallucinations and delusions based on these hallucinations that will make them sound out of touch with reality. In combination with the fact that meth induces alertness, these unpleasant effects lead to problems with sleep.

Withdrawal from nicotine occurs within the first few days of not smoking and leads to problems with attention, memory, and anxiety. Since the chemicals that make up cigarettes contain carcinogens, cigarettes are well-known for their connection to lung cancer. Heavy smokers significantly increase their risk for lung cancer, but even if someone does not get lung cancer, they are still at risk for other lung problems if they continue smoking. This includes bronchitis, emphysema, asthma, and chronic obstructive pulmonary disease.

At The Recover, we understand that any substance addiction is not something that is easy to overcome for anyone. Fortunately, there are a variety of treatment programs with a wide range of learning techniques, medications to reduce withdrawal, and therapies aimed at recovery. Breaking free from substance dependence is not a smooth transition to endure, but with support from others, you have a fighting chance.

The Recover is an unbiased substance abuse and mental health news provider that helps people who are looking for the right treatment programs in their area. We also provide information on West Virginia centers for addiction recovery. If you are experiencing difficulties with controlling how much you drink, please feel free to contact us at (888) 510-3898 to talk to a treatment specialist who will help you find substance abuse help today.

The Alcohol Epidemic Amongst College Students