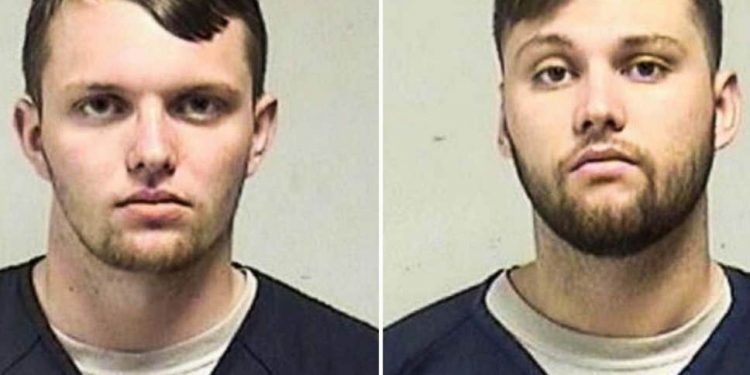 In the midst of the vaping epidemic that is rising in our country, two brothers have been arrested. Two siblings in their early twenties have been accused of running one of the most significant business to manufacture and sell illegal THC-filled vaping cartridges in the US.

According to police, 20-year-old Tyler Huffhines was the ringleader of a sophisticated vaping “empire” and is now being investigating for any links to recent vaping-related illnesses and deaths. Taylor was charged on Monday on several accounts of possession with intent to distribute. Police claim the twenty-year-old had over 10,000 grams while also maintaining a drug house, and identity theft. He is now being held on $500,000 cash bond as of Tuesday. As for his brother who was also arrested, had been previously convicted of dealing cocaine — was charged on counts of possessing cocaine, THC, and a firearm.

The two operated their business out of a rented condo in Bristols were they hired and paid 10 people to fill liquid carts with THC. This process is still illegal in Wisconsin. The men would also package the vapes in bright colored boxes labeling them with names like “Chronic sour patch.” According to the police reports, officials confiscated more than $1.5 million worth of THC products during the raid.

Police involved have vowed to work with other agencies to see if the brothers had any connection with the recent deaths and illnesses. Tuesday health officials announced that a California man became the seventh victim to die from a vaping-related illness. The Centers for Disease Control and Prevention (CDC) activated an emergency operation to investigate the crisis of lung illnesses linked to vaping.

The two suspects were arrested after police searched their family home in Paddock Lake on Sept. 5. They found approximately $59,000 in cash, eight guns with ammunition, nine burner phones, cocaine, marijuana, Xanax pills, and other drug paraphernalia. When authorities searched their condo they discovered, approximately 31,200 vape cartridges filled with 1 gram of THC each, around 98,000 empty vape cartridges, 57 mason jars filled with 1,616 ounces of refined liquid THC. Around 18 pounds of marijuana, three money-counting machines, and thousands of empty vape cartridge boxes and boxes.

The investigation was initially launched by the Waukesha Police Department when a parent of an unidentified teen reported in July that she “wanted to hold their son accountable.” The unknown information also informed police about finding the candylike vaping package in his room,

Police have confirmed that the THC-filled vaping devices were being sold among high schoolers in the Waukesha community.

Detectives also discovered snapshots on Tyler Huffhines phones where he had posted several stories of him with boxes, cash, and drugs — even boasting how he flew first class to California to purchase vape containers. He stated he had acquired enough containers of THC liquid to fill between 4,000 to 5,000 vaping cartridges per day in Wisconsin.

He later confessed to police that he began his THC vaping business on Jan. 28, 2018 and posted a photo to commemorate the event.

told authorities that he began his THC vaping cartridge business on Jan. 28, 2018, and posted a photo of it on Instagram on the same day.

“You invest more, you make more,” Huffhines told detectives, according to the complaint. “No risk, no reward.”

Tyler Huffhines explained how he ran and fueled his operation. He states that he would buy prepackaged THC cartridges from California for $2.50 apiece to sell for $15 in Wisconsin. A tactic is known to many within the marijuana business. He later began to hire employees to double his profits. The operation started to pick up so fast and ran so smoothly that employees had time cards.

“He prides himself on being a young businessman,” Beth told reporters. “He’s a 20-year-old businessman who is willing to put other people’s lives at risk, including children, for his benefit.”

“This was going on under our noses,” Beth said. “Parents cannot take this lightly.”

Police are warning parent to be extra careful when it comes to vaping packaging and devices. Authorities encourage people to through away any street bought carts.