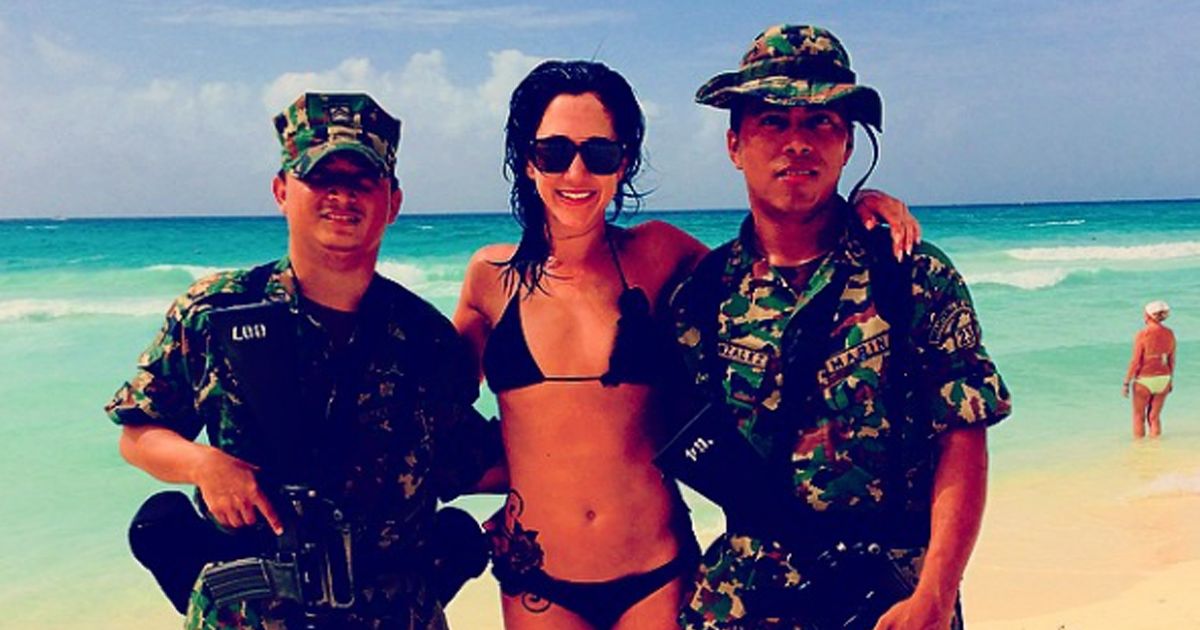 Canadian model Melina Roberge was dubbed the ‘Cocaine Babe’ who posted a collection of various pictures from her round the world “Cocaine Cruise” was in tears when she was sentenced to a minimum 4 years and 9 months in prison for drug trafficking.

The 24-year-old brunette and another female accomplice Isabelle Lagacé, were used as a front for a massive illegal drug trade while on a two-month vacation. The pair was backed by 65-year-old Andre Tamin, and described as Roberge’s “sugar daddy” she met in 2015 while working as his escort. She said he recruited her to go on a drug-smuggling trip to Morocco the next year.

Roberge documented her travels on her Instagram account hoping to fuel jealous homebodies and create her own #travleinspo hashtags during her travels. Some of the pictures on her Instagram showed the two women driving dune buggies in Peru and drinking out of coconuts in Tahiti. The intercontinental cruise, the MS Sea Princess, began in Britain and traveled to Ireland, the United States, Bermuda, Colombia, Panama, Ecuador, Peru, Chile then Australia. The photos have since been removed from Instagram.

The plan was not well thought out.

The trio was caught after being identified as “high risk” passengers of the 1,800 on the cruise ship they were on by the US department of Homelands Security and the Canada Border Services Agency. The search and seizure resulted in more than 200 pounds of cocaine, or $30 million dollars, a record number of cocaine smuggled in luggage through an Australian air or seaport.

Roberge did not enter her guilty plea until days before her trial began in February. All three have entered guilty pleas and Roberge’s accomplice Lagace, 29, was sentenced in November to 7 ½ years in prison backdated to their arrest. Lagace will also likely be deported after serving a non-parole period of 4 ½ years. The third accomplice, Andre Tamin, 65, will be sentenced in October. He was caught with 60 kilograms (132 pounds) of the drug in his cabin.

Before her sentencing Roberge wrote an affidavit to the court, explaining that she took the trip to “take photos of myself in exotic locations for like and attention, and hurt so many people in the process,”

“I was meant to just be there and look like I was on holiday and look like a cover for everyone else,” Roberge said at the sentencing hearing, CNN reported. “I am really sorry, I should have thought about the consequences and not what I would have gotten for it.”

She continued in her statement, saying that at the time she was “a stupid young woman” who was governed by superficial goals, “I have devastated so many people in the process,” she wrote

“Since I have been in jail, I have come across people struggling with addiction,” she said, sobbing. “I don’t want to be part of that.”

Roberge then admitted to the court she suspected drugs were brought aboard while they stopped in Peru because of the increased activity during the delay.

Judge Kate Traill blasted Roberge’s motivation for corruption as a “very sad indictment” on her generation who “seek to attain such a vacuous existence where how many ‘likes’ they receive are their currency.”

The judge said Roberge was also motivated by profit. She was promised the ticket, 4,000 euros ($5,000) in spending money plus more cash once she returned home.

According to the Australia News Corp. Roberge could have earned as much as $100,000 for smuggling the drugs.

“She was not doing it for debt,” prosecutor Tom Muir explained during Roberge’s hearing. “It’s for the lifestyle she wants to enjoy.”

Judge Traill condemned her actions as those of an insecure woman looking to boost her fame through any means necessary.

“It is sad they seek to attain such a vacuous existence where how many likes they receive are their currency. She was seduced by lifestyle and the opportunity to post glamorous Instagram photos from around the world,” the judge said. “She wanted to be the envy of others. I doubt she is now.”

Traill then added “This highlights the negative influence of social media on young women.”