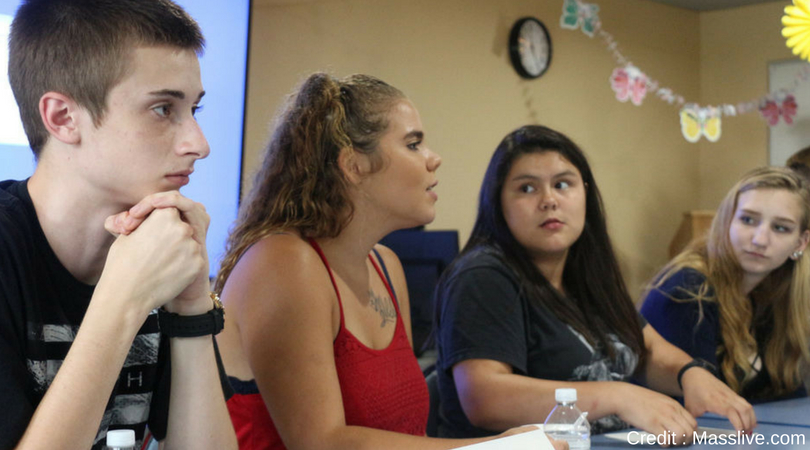 Many parents have seen their children starting down the addiction rabbit hole as early on as 9th grade, who are at a loss on where to turn to get their young loved ones help without derailing their education during a crucial time in their lives. A high school in Massachusetts has formed a solution to help teens curb addiction issues before it could ruin their lives.

In an interview with a Massachusetts news publication site, 6 students told their experience with Rockdale Recovery High School, a first of it’s kind addiction related high school that takes in high risk teens through young adults and refocuses their energy onto their education instead of finding their next fix. Only students’ aged 14 – 22 who have been diagnosed with addiction disorders and a desire to find sobriety are accepted.

Students identified, as Jason, Brooke, Jo and Sam are all students at Rockdale Recovery High School, spoke at UMass Memorial Medical Center’s Tri-River Family Health Center in Uxbridge as a part of a free town hall for anyone who wanted to learn about adolescent substance abuse.

“If I were to be completely honest, I feel like this school saved me,” Sam said.

Sam told her story to a panel of members of the healthcare community, how she began trying drugs at 13 and soon found herself addicted to pills.

She believes if she weren’t enrolled at the Rockdale Recovery High School, she would be dead by now, at 17. When she was using, she started to notice that drugs were destroying her life and the lives of people around her. But she would still go back and choose to use.

Sam’s story was lucky enough to be accepted into Rockdale Recovery, and that decision has changed her life.

Like the five other teenagers sitting beside her, Sam has had slip-ups. But she is alive to continue learning and working on her sobriety.

Tri-River Dr. Margaret Chang and Dr. Safdar Medina started the town hall with sobering statistics: In Massachusetts from 2013 to 2014, opioids accounted for more than a quarter of all fatalities among people in the 18 to 24 age group.

But these teens lived and wanted to share their stories to help others. Curiosity and learning who she was led Sam to using drugs, for others it was struggles with mental health, and some were exposed to substances through their own family members.

Seventeen-year-old Jason started smoking cigarettes and marijuana with his own mother when he was only 11. Eventually his habits grew to include his current drug of choice, cocaine.

“I never thought I would be 17 years old sniffing coke and selling crack on the street. Never once did I think that,” Jason said. “When I was 11 years old I just didn’t even really know what I was doing. I was smoking pot, I was getting giggly, and I thought it was the greatest time. Six years later down the road, I’m on the street sick, trying to make any kind of dollar anywhere I can. Not once did I think that was gonna happen. If I knew that was gonna happen, I never would have picked that first one up.”

Jason feels marijuana exposed him to the other drugs he became addicted to, by introducing him to people who used harder drugs.

Jo grew up with an addict father and an alcoholic mother, and growing up she never thought she’d start smoking, until she did.

Her eating disorder added to her downfall into addiction when a friend tried to give her a suggestion to help with her weight issues.

“One of my friends told me that if I did coke I wouldn’t want to eat and I would lose weight,” she said. “So then I started doing that so I wouldn’t eat and I got addicted to it.”

She’d stopped eating, and her life started to feel numb. Her parents’ absence added to her despair, and she believes if her parents were around more, she would have been able to see her addiction developing. Without their guidance she slipped through a crack.

“Maybe if my mom was around more or maybe if my dad tried to call me a little more, I’d feel more,” she paused, “wanted.”

Brooke’s experience with detox facilities didn’t give her a leg up at Rockdale. She remembers the throws of withdrawal and hating everyone who tried to give her some help.

“The people that cared the most, I thought they were the worst people,” Jo said, recalling her sour mood during her first visits to detox centers. “I’m clean now, so thanks to those people.”

But none of the teens ever felt fully comfortable or assisted at rehab, even though it helped in the long run, they said. Their experiences with shady rehab centers tainted their views of what real recovery could be like.

“All the times that I’ve been to detox have been pretty bad,” recalled 19-year-old Brooke, whose drugs of choice are ecstasy and crack.

Brooke said she would see detox center staff members sneaking in drugs for patients at the facility. The other teens saw that, too, in their experiences.

“It just made me feel very uncomfortable and unsafe because the male staff would always try and like be googly eyes over the girls because we’re vulnerable and were upset and we don’t care,” she said. “We don’t need people coming in and taking advantage of us and giving us the drugs. We’re gonna die at one point if we don’t stop and they’re not helping.”

After sharing their own experiences, Jason and Brooke listened to others speak during the town hall. The teens wanted to express how their opportunity to get into Rockdale Recovery High School changed the path for their futures.

“If I didn’t go to Recovery High School, I’d still be on that sidewalk doing drugs and wasting my life,” Jason said. “Now the school has opened up my eyes to look at things from a different point of view and I actually have a plan now. I want to go to college. I want to go to trade school and go into the Army as an electrician.

The high school, located on Rockdale Street in Worcester, serves students from across Worcester County.

Students looking to be accepted need to be diagnosed with addiction and show a strong motivation to get clean and stay sober. Then, students interview with the principal, Susan Strong, and Alyssa Richard-Figueroa, the school’s recovery clinician, who were in attendance to help moderate the town hall on Thursday.

Following acceptance, Rockdale pairs with the students home district to ensure the student is meeting all educational standards needed to earn a diploma and graduate. For the most part, Rockdale operates like a traditional public health school except for the sessions with councilors like Richard-Figueroa, who help teach the teens skills to prevent relapse and refuse drugs along with useful life skills.

Drug testing is held weekly, and more often for students exhibiting signs of risky behaviors. But those who relapse aren’t immediately removed from the school, the program works with the students to find them treatment and get them back on the right track, according to Richard-Figueroa.