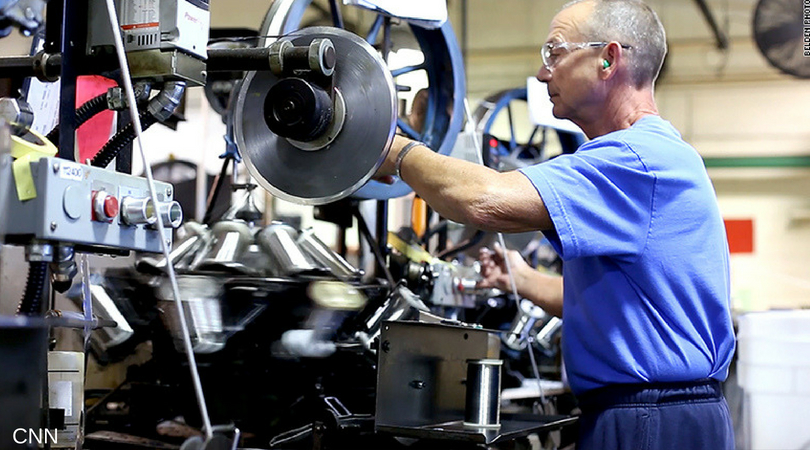 There’s a factory in Richmond, Indiana that’s scrambling for employees. Addiction has taken many of the prospective hires out of the worker pool, and instead of turning their backs and shutting their doors, the Belden Electric Wire factory is stepping in. The manufacturing company is offering to help addicted employees find sobriety and support themselves.

Its’ hard for many to pass a drug test, which immediately disqualifies them from employment in most cases, but Belden Electric offers drug treatment, covered by the company to those who fail their drug screen. Once treatment is completed, the applicant is then promised a job.

The pilot program launched in February is believed to be the first of it’s kind shows just how serious the national drug problem has become and also acknowledges the need for qualified workers.

“If we did the same things as we did in the past, we weren’t going to be successful in hiring the folks we needed,” says Doug Brenneke, Belden’s vice president of research and development, who helped start the program.

Belden is the second largest employer in Wayne County, and it’s fate is intertwined with the community surrounding it. The company has faced a shortfall of workers for the past two years, and drug test failures have tripled, says Doug Brenneke, Belden’s vice president of research and development.

The company makes electrical cables at its factory in Indiana, near the Ohio border and has been in business for nearly a century. One of its earliest customers was Thomas Edison, and the 14-acre factory now constructs wires that are used to hook up TV’s and Internet routers around the globe.

One of the company’s 35-year veteran employees, Louis Hubble, has his own personal experience with addicted loved ones. Many of his own family members have worked at Belden as well, with aunts, uncles, siblings and parents, his family has over 300 years of service with the company.

“When I first was hired in here, you had to be careful if you said anything about someone, because you’d be talking about their brother or their sister or their cousin or their aunt or uncle,” Hubble says.

Years previously, his sister also worked at Belden before switching into a new career. In 2012, at age 44 she died from complications of her opioid addiction, leaving her three children behind.

“And I’m not gonna lie, I miss my sister to this day,” Hubble says, pausing to contain his emotion. “I always look back and say, ‘What more could we have done?’ ”

As families grapple with the growing drug epidemic, so, too, does Belden.

It all started two years ago when the company needed to fill 75 positions, which was a difficult task to begin with, only grew more hopeless when the percentage of applicants failed drug tests tripled.

The shop requires 450 workers to run the operation around the clock. A lack of workers means an increase in overtime pay, and an accumulation of missed work means failed sales targets.

While every employer in the area speaks about addressing the problem of addicted workers, most have left the solution up to the government, or shunned struggling potential employees completely. Instead of turning machines into automated work, Belden has decided to step in where they haven’t been required to do so before.

“We think part of the solution is offering basically a path out,” Brenneke says.

Belden’s program has taken the expense into their own hands, by not only paying for treatment of current employees, but employees not even fully hired yet.

“It’s not a silver bullet, but it is part of an overall solution, we believe, to the epidemic,” Brenneke says.

There have been 17 sign ups so far, with therapy lasting between one and four months depending on the severity of the problem. Of those 17, 3 are already working on the shop floor. Brenneke says he hopes those rosters will continue to grow. Recruitment needs, he says, are not subsiding; a third of Belden’s workforce is within 5 years of retirement age.

Current workers are able to take advantage of the program, like 48-year-old Richmond native, Shawn Adelsperger. In June he was involved in a minor forklift accident. When he was subsequently drug tested after the event, his results showed his recent drug use. Adelsperger says his recent divorce and daughter’s heroin addiction fed onto his own dependence issues with alcohol and marijuana.

“One of the biggest things in the program so far is being able to put everything out on the table and talk about it,” he says.

According to addiction experts, patients referred to treatment through work often respond better.

Employers can often learn of an addiction at an earlier stage, making it easier to treat, says Mitch Rosenthal is a New York addiction specialist who helped design Belden’s program.

“The fact that people can see themselves succeeding in work as they also succeed in therapy and self-understanding is powerful,” Rosenthal says.

Rosenthal praises Belden’s program, saying that the program is special because employees can support one another while on the job. “Their sobriety and the fact that they have changed, and are changing their lives, is an encouragement to the people who will come in after them,” he says.

Both Rosenthal and Belden hope the success of this program will inspire other employers to replicate it.

Belden’s vice president of human resources, Leah Tate says the company is committed to paying for residential treatment for the job applicants. Because of Belden’s close ties with the community, they were prompted to invest more into treatment for potential employees and current employees alike.

But costs can be unpredictable. While treatment can run $5,000 per participant, additional costs are also necessary for some workers who need help getting transportation, many have lost their drivers licenses. Workers who have completed the treatment aren’t able to operate the machinery until they have been clean for a few months, making them less than fully productive.

But there are challenges.

Leah Tate, Belden’s vice president of human resources talks about the initial challenges but they feel its necessary to get competition employees.

“There’s a lot more cost, a lot more hand-holding,” and a lot more administrative cost, Tate says. Despite the fluctuating costs, she says Belden remains committed, even to paying for more expensive hospitalization when necessary. In many ways, she says, the company has no choice.

“We’ve been in his community since 1928 — we have families of families that’ve worked in this plant and for this company — so the Richmond community is extremely important to Belden,” Tate says.

Louis Hubble believes if the program were around when his sister was still employed, it would have helped her.

“When she lost her job and then she ended up being on the streets, she had no hope,” he says.

If the program helps one or two families avoid the same outcome, he says, it will be worth it.