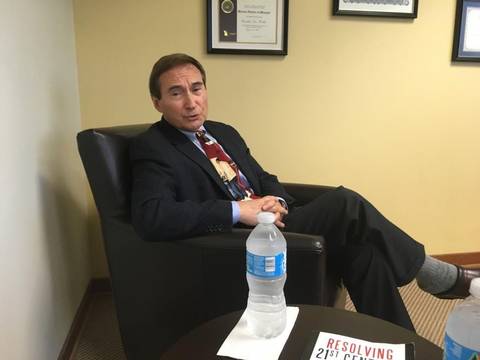 A Kansas man is suing the doctor who treated his wife’s pain that lead to his wife’s fentanyl overdose in 2014.

This is now the third suit against the doctor in Johnson county brought on by former patients seeking damages due to imprudent prescribing. Dr. Steven Simon was reportedly the top pharmaceutical industry speaker in Kansas from 2013-2015, earning himself over $1 million in travel costs and speaking compensations. Of that, $200,000 came directly from the pharmaceutical company Insys, because he was a top prescriber of their medication within the Medicare Part D program.

Olathe local James Whitham saw the doctor for gastrointestinal pain due to ulcers and a bacterial infection. Simon treated him with Subsys, a fentanyl spray used under the tongue, and only FDA approved for cancer patients who already taking long acting opioid medications. After a year of taking the medication, one of Simon’s nurses, Donna Ruck, asked Whitman if he would be willing to say he had cancer.

James reached out to the Kansas Cities ‘The Star’ after an article was written on the doctor that elaborated on his speaking work for another drug, Movantik. In that article it was mentioned that Simon was paid to speak about opioid related medications, including Subsys.

“He’s giving me a drug that he didn’t have to give me; he said it was in my best interest, but he’s making $200,000, or whatever it is,” Whitham said. “He’s making more money doing speaking engagements for that drug than I do trying to go back to work, and I can’t go back to work on that drug.”

Like Whitham, Resident Carey Ballou was reluctant and alleged the doctor urged her to take the medication without disclosing the high potential for addiction, with other, less risky medications being available. He never mentioned his financial ties to the drugs manufacturer either.

Ballou had originally seen the doctor for a back injury, but had an ongoing diagnosis of Leukemia, making her a valuable patient to Dr. Simon.

Like the first suit filed by James Whitham, the three parties allege medical negligence, fraud and conspiracy against Simon and several other parties, including Insys.

The Overland Park Doctor, Steven Simon, treated Bobby Ray Jordan’s wife for severe back pain from 2013 until her death in January 2014. Jordan didn’t even know the Subsys medication prescribed to his wife was even a fentanyl product or that is was only approved for cancer patients. He also didn’t know the doctor was being paid to promote it. He only learned of the potential wrong doing when he was approached by law enforcement inquiring about his wife’s treatment with Dr. Simon.

According to the suit, the county coroner told Jordan his wife died of “fentanyl intoxication with contribution from underlying diseases,” but the coroner inaccurately said that his wife’s medical records showed no source of prescription fentanyl and therefore she must have gotten it illegally.

Simon’s clinic, The Pain Management Institute, was raided by FBI agents in July 2017. The clinic’s owner, physician Srinivas Nalamachu, told the Kansas media outlet the Star that the agents seized the records of all patients for whom Simon prescribed oral fentanyl products, including Subsys.

Nalamachu said via phone that Simon and Ruck no longer work at The Pain Management Institute in Overland Park, which had since been relocated and re-named as Mid-America Polyclinic. Simon’s medical license remains current but Nalamachu said he did not know if Simon is practicing elsewhere.

The U.S. Food and Drug Administration approved Subsys only for “breakthrough cancer pain,” but federal prosecutors say that Insys pushed doctors to prescribe it “off-label” for other types of pain, then helped mislead insurance companies that were reluctant to cover it for such uses.

In addition to Simon and Insys, the lawsuits filed last year, it also names defendants Donna Ruck, the nurse who worked under Simon and allegedly asked Whitman to lie about having cancer, and Torgny Andersson, an Insys sales representative who frequented Simon’s clinic, and three Insys executives, including the company’s billionaire founder, John Kapoor.

Last year, John Kapoor was arrested on the same day that President Trump declared the National opioid crisis. He is accused of bribery towards doctors to promote the pain management cancer drug.

Insys’ most recent quarterly report shows that on top of the federal prosecution, the company is also facing at least eight other suits across the country brought by patients like Ballou and Whitham.