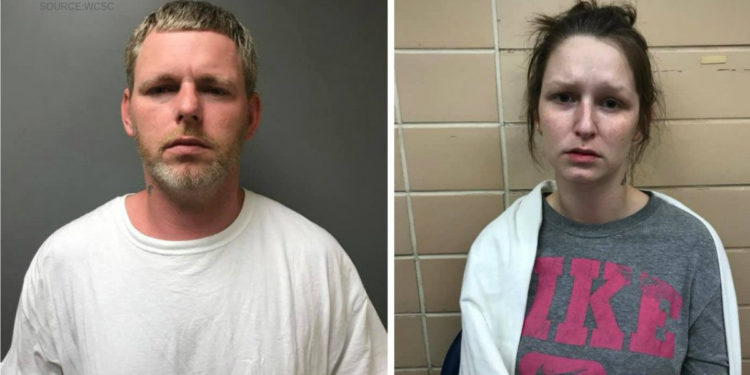 A Two-year-old was taken to the hospital Sunday in Scotland County after being found unresponsive from ingesting a combination of fentanyl and heroin.

A Facebook post on the Scotland County Detective Division’s states “The child was reported to have ingested an illicit narcotic, a schedule II narcotic identified as Fentanyl and Heroin combination, as defined by North Carolina general statutes. The minor child is reported to be stable at this time and remains in the care of Child Services and being held for observation at a local hospital.”

Both parties have received a secured bond of $500,000 and are scheduled for a first appearance on Monday. The current investigation is ongoing. Authorities obtained a search warrant for the residence of Ivey and Sessoms in the area of McFarland Road, a number of items were seized as evidence. Reports claim Ivey and Sessoms will be charged on additional charges regarding possession of a schedule I and II narcotics, related to MDMA, “ecstasy”, and heroin.

The Facebook post instantly sparked controversy among the Scotland County Detective Division’s states followers. Many have requested it to be taken down from Facebook. A comment replying to the Detectives Post says, “No one knows what really happened and anyone can speculate as to what did happen but I wish that people could remember their family is reading this…. people need to remember bad things can happen to good people. The main concern should be for the kids.”

The post remained up for almost 24 hours but was removed due to the high volume of negative feedback for privacy and respect for the families involved. Scotland County Detective Facebook post said, “The information was removed after a number of comments were made on the post, regarding sexually charged or explicit statements about the minor child involved and the defendant.”

Clarifying on the reason for the removal saying “Comments included statements about the minor child, and a number of other statements regarding the (victim) minor child’s character, truthfulness, and overall reputation. Stressing the idea that the victim is a minor child, less than 13 years old. In order to protect the dignity and safety of the minor child involved, the post was removed.”

The County Sheriff’s department explains in detail the purpose of creating arrest reports, solely to share information with the local communities in hope to spread awareness and teach others of the consequences involved with certain actions.

According to their records “That post, in particular, was viewed more than 22,000 times and shared more than 300 as well as posted and published by various news sources. Thus, the information was shared with the public.”

The Sheriff’s post concluded with “Our agency will always place the safety, security, emotional and overall well being of our victims as a top of our priorities, especially when they are minor children.”

They added, “We would be failing if we did not do this for our identified victims and especially when they are children and we encourage them to report crimes committed against them.” The investigation is still ongoing.