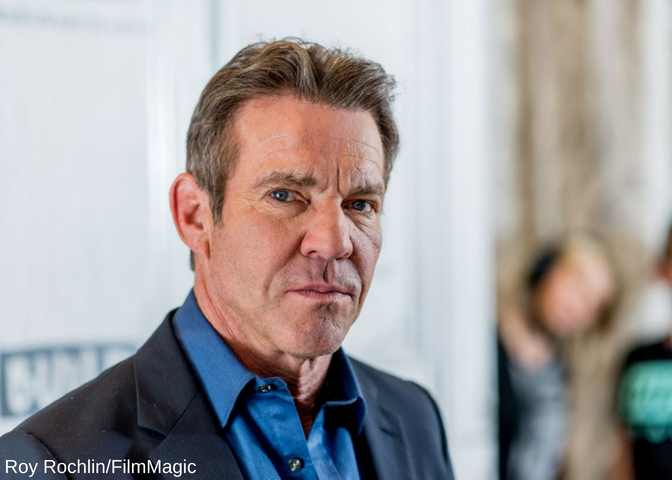 Beloved 80’s actor Dennis Quaid is now talking about his former cocaine addiction in an interview with Meghan Kelly on The Today Show. Quaid was best known for The Rookie, The Parent Trap and The Right Stuff during the 80’s and 90’s. During his most successful years, Quaid admitted to using Cocaine so frequently he was sleeping only one hour a night.

“I grew up in the ’60s and ’70s, and there was a completely different attitude about [cocaine] back then,” he said. “I was basically doing cocaine pretty much on a daily basis during the ’80s,” Quaid said. “It was even in some movie budgets,” he admitted “I spent many, many a night screaming at God to ‘Please take this away from me, I’ll never do it again because I’ve only got an hour before I have to be at work.’

The now 64-year-old actor said he started using Cocaine when he first got to Hollywood. He would agree to stop using the drug but by the early evening he would start using again.

“Then about 4 o’clock in the afternoon I would be, ‘Oh, that’s not so bad.’ I had a white light experience where I saw myself either dead or losing everything that meant anything to me,” he said.

“I had a reputation for being a ‘bad boy,’ which seemed like a good thing, but basically I just had my head stuck up my a–,” the actor said.

“I had what I call a white-light experience, where I saw myself either dead or losing everything that meant anything to me,” he said.

In 1990 Quaid went through a short stint in rehab where he told then fiancée actress Meg Ryan about the severity of his addiction.

“That was the end of the love affair for me with cocaine,” Quaid said of his rehab stay. “I didn’t play music for a while because it was so connected to music. I meditated for two years straight. I read the Bible. I read the Dhammapada. I read the Bhagavad Gita. I read the Quran. I just started really delving into the mystery because that’s what addiction is really about — it’s about trying to fill up a hole inside of yourself.”

Luckily, his relationship with Ryan survived his treatment and they married in 1991 and welcomed their only child together the next year. When they married his career began to stall and his wife’s began to take off, which caused tension in their relationship while he was working on his sobriety. He even admits to becoming jealous of her during their marriage. Eventually, it led to their divorce in 2000.

“When we met, I was the big deal. Then my career [stalled] and [hers soared]. We’d go out on the streets of New York, and it would be like, ‘Meg! Meg!’ And I have to admit it: I actually did feel like I disappeared.”

He said he surprised himself with his jealousy over it. “I didn’t think I was that small, but I was,” he said.

The actor is working on Amazon’s Fortitude and raising his twin 10-year-old children Thomas and Zoe.