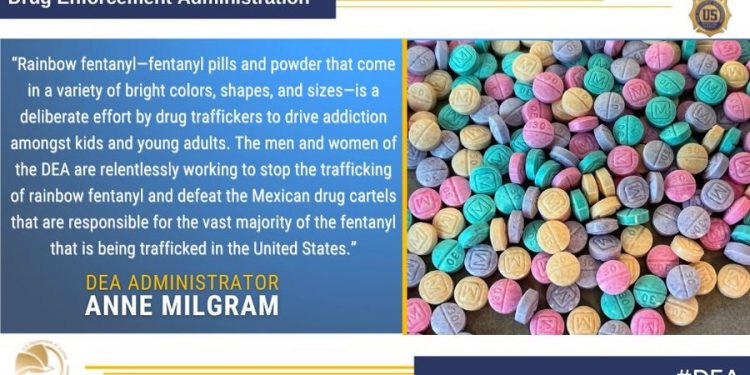 In recent years, the drug fentanyl, a synthetic opioid that looks like candy, has become more common in the United States, with an increase in overdose deaths among young people. As Halloween nears, it is important to watch out for unpackaged candy and teach children to check it before eating it. In addition to its addictive qualities, fentanyl can damage the brain and other organs, leading to an overdose. The DEA has warned against handling this type of synthetic opioid, and parents should notify local police if they notice anything suspicious.

The United States Drug Enforcement Agency has uncovered a new trend in drug distribution that involves brightly-colored fentanyl, which is often used to inject drugs. This new type of synthetic opioid is highly addictive and can appear in candy or sidewalk chalk. It is 40-50 times more powerful than heroin and morphine and can be lethal if consumed in large amounts.

Reports of “rainbow fentanyl” drugs have been rising in Arizona, Oregon, and California, as well as the D.C. region. While the bright colors of these pills may make them more appealing to children, they are still extremely dangerous. Many of these pills have been linked to fatal overdoses, so it is important to be aware of any potential risks.

DEA officials have warned parents of a growing problem with these drugs. In addition to the rainbow fentanyl color scheme, fentanyl is also often disguised as sidewalk chalk or candy. It is difficult to detect unless it is mixed with other drugs. Drug enforcement agencies say the new drug has the potential to cause a large number of overdose deaths.