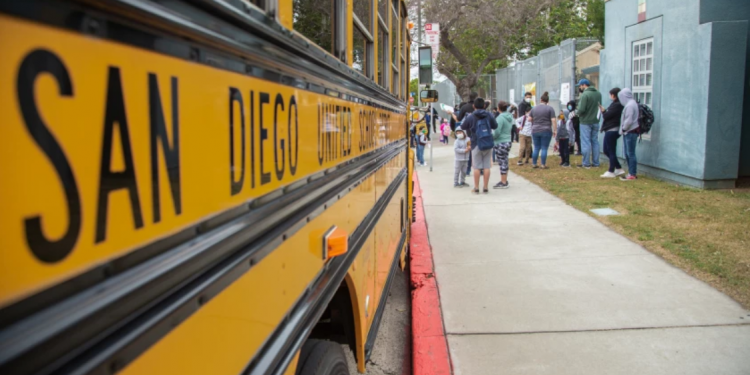 District says all students are welcome to go to school as usual next Friday, but attendance optional

San Diego Unified School District announced Friday evening that it planned to recommend making school attendance optional on Nov. 12, allowing anyone who wants to take a mental health day to do so.

The announcement came a day after Interim Superintendent Dr. Lamont Jackson said district staff planned to ask the district’s Board of Education to approve next Friday as a day off at its upcoming meeting Tuesday. The news prompted a wave of concern and criticism from parents, some of whom said finding affordable last-minute childcare would do more harm than good for their family’s mental health.

“We’ve heard from many families that appreciated the opportunity to focus on mental health and wellness; others expressed concerns about their ability to find adequate childcare solutions on such short notice,” Jackson wrote in an email to parents Friday evening. “After careful consideration, we have decided to keep our classrooms open next Friday.

“All students will be welcome at school on Nov. 12,” the message continued.

The day off would create a four-day weekend for those who choose to take it, as schools are already closed for Veteran’s Day on Thursday, Nov. 11. Any students who take the day will have their absence marked as “excused,” the letter stated.

The letter did not say if next Friday will resemble a typical school day or if classroom activities would vary.

San Diego Unified officials described the impetus behind the recommended day off as an acknowledgement of the stress families and teachers have been under as they navigate the return to in-person learning amid the ongoing pandemic.

“The last 20 months of the pandemic have challenged all of us in different ways,” Lamont wrote in the original announcement sent out Thursday. “We have heard from many parents and students that their mental health has suffered. Staff has worked tirelessly to provide the best learning environment for all students, while continuing to operate in the middle of a pandemic. That is why we have decided to take the extraordinary step of providing every family with additional recovery time next week.”

The original recommendation was to include finding “childcare options for families who need support on Friday,” as well as making available a reduced version of the district’s school-day meal service.

But many parents balked at the notion of having to quickly change plans — and questioned the motivation behind the proposal.

“I trust you know that a great deal of the mental stress for parents and students during the pandemic has been the lack of in person instruction,” Katie Kirby, a parent of a 6-year-old SDUSD student, wrote Thursday night in a letter to the superintendent, which Kirby shared with The San Diego Union-Tribune. “To conclude that keeping kids out of school an additional day at this time to alleviate that stress is counterintuitive and nonsensical.”

Kirby wrote that she hopes the board does not approve of the plan, which would do more harm than good for many families.

“If you want to assist us with our mental health, do everything you can to maintain a consistent, in person school schedule,” she wrote.

Other parents of SDUSD students took to social media to question the district’s stated reasons for the recommended day off.

One person posted on Twitter what appeared to be an excerpt from a message from an SDUSD elementary school principal saying the biggest reason for the proposed day off was district-wide staffing shortages caused by instructors calling out of work. The principal could not be reached for comment Friday.

Other people who posted about the issue on social media said unexpected days off, such as “snow days” for kids who live in cold climates, are a surprise treat that brings joy to students — a good thing for their mental health.

Kisha Borden, president of the San Diego Education Association teachers union, said that returning to in-person learning has been a tough adjustment for both teachers and students.

“While we don’t have access to data on how many students or staff might be absent on the 12th, I do hear from educators and parents on a regular basis as to how challenging the beginning of this school year has been and how difficult it has been to return to anything like normal after the stress of last school year,” Borden said.

Some districts said they have sometimes had to rely on principals, non-classroom teachers, district office staff, or even human resources directors teach in the classroom because schools can’t find enough subs.

Tips on How to Cope With Uncertainty