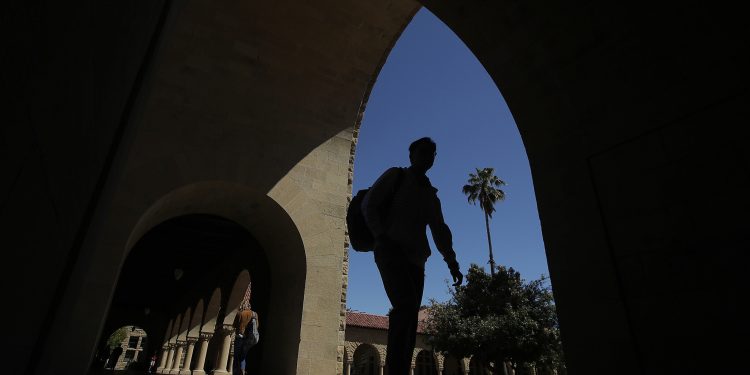 FILE - In this April 9, 2019, file photo, pedestrians walk on the campus at Stanford University in Stanford, Calif. The Education Department released a report Tuesday, Oct. 20, 2020, amid its effort to enforce a 1986 law requiring U.S. universities to disclose gifts and contracts from foreign sources. The department’s findings are primarily based on investigations it has opened at 12 schools, including Harvard, Yale, Stanford and Georgetown universities. (AP Photo/Jeff Chiu, File)

Dr. Ronald Albucher, a psychiatrist and associate professor in the medical school, and Sheila Levin, a therapist specializing in eating disorders, describe being pressed into joining a “whiteness” affinity group by staffers with the school’s Diversity, Equity and Inclusion program, or DEI, being told they were “privileged” and seeing antisemitic incidents downplayed.

The university responded inadequately to their concerns, made over the course of a year, Albucher and Levin say, thereby fostering a “hostile and unwelcoming environment” for Jewish employees working for Stanford’s Counseling and Psychological Services office, or CAPS.

The complaints, which were released publicly on Tuesday, were filed with the US Equal Employment Opportunity Commission and California’s Department of Fair Employment and Housing. They allege violations of state and federal laws, including Title VII of the Civil Rights Act.

Albucher and Levin allege a pattern of anti-Jewish bias within the Diversity, Equity and Inclusion program, including omitting discussions of antisemitism from a 2020 session that immediately followed a reported Zoom bombing antisemitic incident on campus. During the session, DEI committee members “justified the omission of antisemitism” from their dialogue, the complaint says, “by insisting that unlike other minority groups, Jews can hide behind their white identity.” 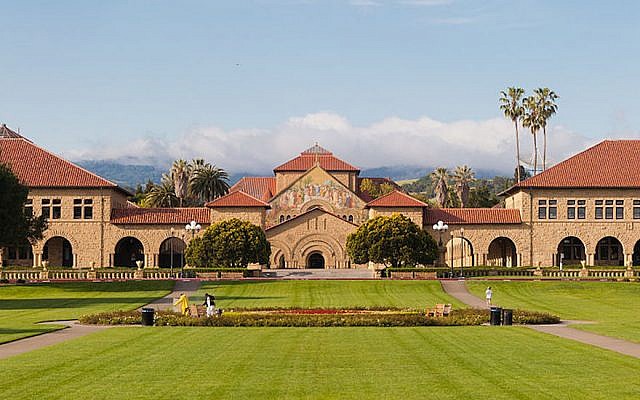 The main quadrangle of Stanford University. (Wikimedia Commons via JTA)

During the meeting, Albucher and Levin say they were “subjected to anti-Jewish stereotypes,” such as that Jews are “wealthy and powerful business owners.”

The complaint also details other alleged incidents of harassment and intimidation, including one DEI representative stating that she “takes an anti-Zionist approach to social justice.” Both staffers say in the complaint that they eventually stopped participating in DEI seminars.

A Stanford spokesperson, Dee Mostofi, responded to the J. request for comment via email.

“We are deeply committed to nurturing a diverse and inclusive work environment, one free from harassment and discrimination of any kind,” Mostofi said. “We value and respect the dignity of every member of our community.”

Most programs and departments at Stanford have internal DEI programs, as do universities across the Bay Area and across the country. According to the program’s web page, the initiative aims to help Stanford’s psychological services office provide care “rooted in cultural humility and social-justice values.”

But some programs aimed at racial inclusion in education have had a contentious relationship with Jewish staff and students in recent years, as campus conversations around racial justice have struggled to situate Jews within broader discussions of privilege, power and discrimination. A proposed California ethnic studies curriculum prompted a yearlong debate over how Jews were addressed in its language. Years earlier, in 2015, a Princeton student caused a stir when he wrote that he didn’t have to “check his privilege” because he was a Jew whose ancestors died in the Holocaust.

The complaints at Stanford come as the school grapples with other reports of anti-Jewish bias.

On June 8, its Hillel director, Rabbi Jessica Kirschner, sent an email to her mailing list describing an “alarming amount” of online and in-person incidents stemming in large part from anti-Israel animosity amid the violence in Israel and Gaza. One Jewish student was told, “Don’t talk to me if you’re Jewish,” while another was told by a classmate, “I’m not going to talk to you, Nazi,” Kirschner wrote.

Alyza Lewin, the lead lawyer from the Brandeis Center working on the case, said the complaint also impacts how Stanford’s student counselors are being trained to respond to the needs of Jewish students.

“Our concern is that this department is training therapists that provide mental health care to students on campus,” she said of the CAPS program, which employs about 30 therapists. “Our worry is that if you are training your professionals to dismiss antisemitism, or to disregard or deny it, how does that impact the quality of care?”

Albucher says it concerns him that politics are apparently being infused into health care.

“How are they going to work clinically with Jewish students? We need to be improving our skills within the mental health field,” he said. “It’s clear these people will put politics ahead of science.”