As we continue to fight in the aptly named War on Drugs, our attention is almost always drawn to the individuals who are suffering and dying as a result of addictive, dangerous drugs. Although these victims deserve as much (if not more) attention than they are already receiving from medical personnel and intervention specialists, however, we sometimes forget about the other side of the game. With all the debates about drug reform and “cleaning our cities” (so to speak), we can very easily overlook some people who are actually fighting on the front lines to keep us safe from drugs and other harmful adversaries: our brave police officers.

Most likely, you would picture our men and women in uniform as the safeguard against drugs, being some of the first responders to a drug-related crime. After all, who else is going to clear out a drunken fight or pull over a dangerous drunk driver to keep our cities and roadways safer than yesterday? Likewise, cops are responsible for busting crooks responsible for selling illegal drugs to innocent victims. Obviously, they are a pillar of strength for the community.

Unfortunately, while they are a strong defense force, police officers are suffering from a dark and somewhat misunderstood reality of life. Due to their stressful jobs and rigorous schedules, these brave men and women sometimes turn to alcohol or drugs to cope with their anxiety, depression, and (worst of all) post-traumatic stress disorder.

When you take a good look at the life of a cop, you will begin to understand why they deserve so much respect and support and why we must work hard to help them get better. Police officers will always have a way to find the rehabilitation treatment they more than deserve.

Here is a closer look at the troubling reality of substance abuse/addiction among police officers.

As unbelievable as this may initially sound, cops actually suffer from drug abuse and addiction more often than the average civilian. Based on recent reports, 1 out of 4 police officers working on the street suffers from alcohol or drug abuse. Also, the percentage of substance use disorders among cops is an estimated 20% to 30%, a drastic climb from the average citizen at 10%.

Why Do Cops Frequently Suffer from This Illness?

Simply put, the life of a cop is not easy whatsoever and demands a lot of strength, courage, patience, determination, and (in unfortunate cases) a strong stomach. As explained earlier, these men and women are a private defense force against criminals and are always on the front lines of a dangerous situation, from mobs to deadly drug busts. Multiple times each week, police officers undergo tremendous amounts of stress both in the office and in the field and are often faced with making a split-second decision to save a life. Let’s also not forget that, in the worst-case scenario, an officer may have to use his gun for a different purpose, an incident that can scar some people for life.

Add to this chaotic mixture a tight schedule and many sleepless nights (leading to poor hand-eye coordination and reflexes), and you can see why cops tend to seek out addictive substances.

The Sad Truth of Mental Health among Officers 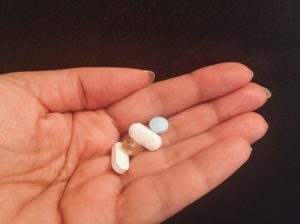 Given the fact that they have to undergo so much stress and anxiety on the job, police officers sadly suffer from particularly high rates of suicide and other mental problems. Reports indicate that 1 out of 4 cops contemplate taking their own lives, and the average suicide rate for law enforcement officers is 4 times higher than the rate among firefighters. Even more disturbing, the rate of suicide among cops is 2.3 times higher than the number of officers killed during a homicide crime.

Let’s also not forget how cops sometimes have to act violently in self-defense or to protect an innocent bystander (an act which, in this case, requires a firearm). As a result of a high-stress and dangerous career, an estimated 7% to 19% of police officers suffer from some degree of post-traumatic stress disorder. Likewise, the added pressure of a community constantly lashing out at them will often drive officers to seek comfort with their coworkers at bars (thanks to the presence of booze).

Like doctors and nurses, cops are frequently exposed to illegal drugs as a result of busts. Sometimes, however, the officers will suffer an overdose and become addicted without even realizing what hit them. For example, recent news reports out of Pennsylvania confirm that police officers are frequently being exposed to fentanyl, a synthetic opioid which is deadlier than morphine and even more addictive. As we have seen in recent news reports, fentanyl has bee deemed one of the deadliest forces behind the Opioid Crisis (America’s homeland epidemic).

What Can Be Done to Help Cops?

Despite all the negative and tragic facts of reality, the good news is that, like anybody, police officers can be cured of their affliction through rehabilitation treatment programs. However, medical professionals who are aiding these patients must have a full understanding of a police officer’s general work conditions and stressors that are unique to each cop in order to give them full support. However, Dr. Indra Cidambi strongly believes that cops function much better when they undergo treatment at residential programs and still complete work in their line of duty. This way, they can be reintegrated into the realities of life much easier, and the stress of being a cop will not hit them that hard.

At The Recover, we fully understand how difficult treatment processes can be for addicts and alcoholics through our daily work to help these individuals overcome this terrible, painful disease. Although many people believe they can overcome their problems without help, residential rehabilitation treatment programs are still an essential step on the road to recovery. Although the path to health and happiness might not be an easy one to take, you can finally enter the threshold to freedom with the help of a loving, supporting team. Additional aspects like counseling and psychological care can ensure you address underlying psychological issues that ultimately led you to become an addict. From here, you can build an infrastructure that will help you live your life with entering relapse, all with the help of a solid residential rehabilitation treatment program.