Vaping the Cigarette of the 21st Century 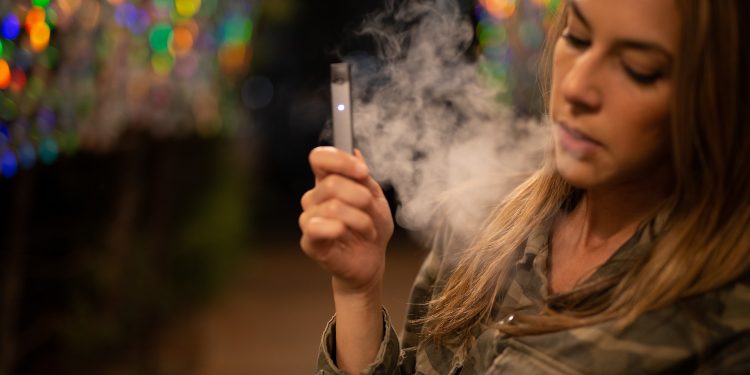 Vaping is all over the news, and not for the best of reasons. Almost 400 illnesses and six deaths have been linked to vaping as of mid-September 2019. The Centers for Disease Control are investigating the issue, and on Thursday, September 12, they lowered the number of vaping-related lung illnesses from 450 to 380. Some suspect additives in vaping juices are the cause. Are they Vitamin E acetate-related deaths? Let’s take a closer look.

What We Know About Vaping-Related Illness

Even the lower number of illnesses is still alarming. Some people need ventilators to recover, and many of the people impacted are young and in good health otherwise. The one thing they have in common is that they all vaped. The problem is that they all vaped different products, so scientists are having trouble narrowing down the cause of the illness.

For example, some vaped nicotine products, some vaped products with THC and some smoked both. Some used products purchased off the street, but others only purchased commercial products from retailers. Since some have died from their illness, experts are considering all possibilities, including whether these are vitamin E acetate-related deaths.

What Is Vitamin E Acetate?

Health officials in New York stated in early September that they are exploring vitamin E acetate as a potential cause of the lung illnesses. Many of the patients undergoing treatment have used vaping products containing THC. Vitamin E oil is often found in THC vaping products. Scientists aren’t sure whether this is because vitamin E is naturally in cannabis or if it’s being added later in the process.

Experts suspect that vitamin E oil, which is harmless when ingested as a capsule or applied to the skin, is causing an illness that resembles lipoid pneumonia. Pneumonia in any form is a serious illness that requires medical attention.

At this point, experts are still investigating potential vitamin E acetate-related deaths. If you’re vaping nicotine products, there is still an element of risk, as we don’t know the long-term consequences of vaping. This is because the products haven’t been on the market long enough to study. E-cigarettes were only invented about 15 years ago, and have only been popular over the next decade.

The CDC is recommending people avoid products purchased on the street. It’s best to stick with products from reliable manufacturers and retailers. If you’re vaping as an alternative to smoking, it’s better to keep vaping than return to cigarettes, which have well-documented, serious health risks. Teens and those who are pregnant should also avoid vaping.

If you don’t vape or smoke currently, now probably isn’t the best time to start. Investigators are working to narrow down the cause, but it’s a challenge with all the chemicals involved. If you vape, pay attention to how you feel. If you experience any symptoms after vaping, such as a fever, vomiting, or trouble breathing, it’s best to go to the doctor as soon as you can. If you are in distress, visit an emergency room.

Ultimately, no one can say for sure how safe vaping is. The best move right now is to do what you can to protect yourself and your health, and avoid returning to smoking traditional cigarettes.