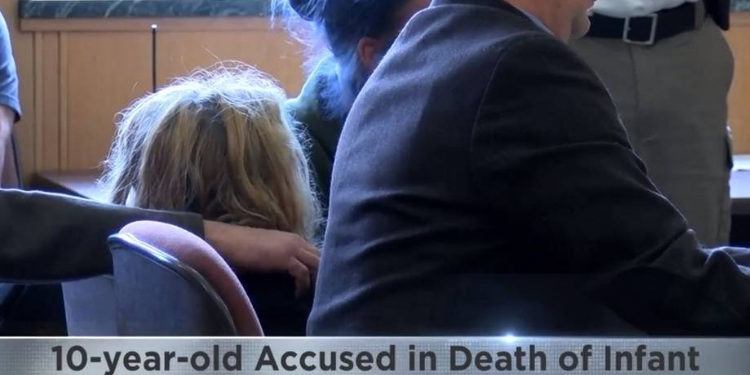 A 6-month-old baby was killed at an in-home daycare center in Tilden, Wisconsin by a 10-year-old girl who has been charged for allegedly stomping on the boys head. She is being charged with first-degree homicide and is being tried in court as an adult. According to the Chippewa County Sheriff’s Office, the station received the call a 911 call from the day care center on the afternoon of October 30th saying the boy had fallen and appeared to suffer injuries to the face and head.

According to District Attorney Wade Newell, when officers arrived on scene they believed the girl had panicked after she dropped the baby. During a press conference Newell told the press, “She stated she was holding the child and that’s when she dropped the child. The child hit its head on the footstool and then the child started crying and she panicked and didn’t know what to do and didn’t want to get into trouble and then she proceeded to stomp on the 6-month-old’s head.”

November 1 the baby was taken to Gillette Hospital in St. Paul before dying of his injuries. The sheriff’s office said in a statement, Child abuse medical specialist told investigators that the baby’s body injuries were from child abuse and not due to the accidental drop, with “multiple skull fractures that were consistent with a heavy.

Detectives interviewed the girl on November 1st before the baby had passed. However, the officers noted what she told them was, “not consistent from what the investigators had discovered up to this point in the investigation. She was then questioned by the detectives on November 2nd when she later denied intentionally harming the infant, but later then confessed to her involvement.

During a press conference, Sheriff Jim Kowalczyk told the public, “A sad day for the Chippewa County, a sad day for the residence of Chippewa county. My heart goes out to everyone involved.”

Chief Deputy Chad Holum told the court, “There’s going to be a lot taking place in the next couple days as to where she is ultimately going to end up,” reports ABC 13

November 5th the 10-year-old girl appeared in Chippewa County Circuit Court, under Wisconsin state law, first-degree homicide suspects must be brought and tried as an adult if the accused is 10-years-old or older.  Her cash bond is set to $50,000 and the investigation is ongoing.

The Recover is an unbiased substance abuse and mental health news provider. Helping individuals looking for the right treatment programs in their area. Also providing information on Wisconsin rehab centers for addiction recovery