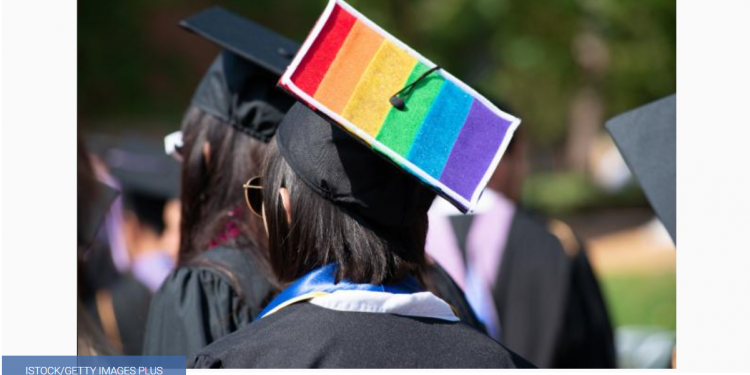 A new study finds that LGBTQ+ students suffer more substance misuse, depression, suicidal ideation and disengagement than their non-LGBTQ+ peers. The pandemic has only made it worse.

LGBTQ+ college students face “sizable” mental health challenges compared to their heterosexual and cisgender peers, according to a new report by the Proud & Thriving Project.

The study found that LGBTQ+ students experience a higher incidence of substance misuse, depression, suicidal ideation and academic and extracurricular disengagement than their non-LGBTQ+ peers.

The Proud & Thriving Project, a collaboration between the Jed Foundation, the Consortium of Higher Education LGBT Resource Professionals and other groups, surveyed 907 high school and college students — 602 LGBTQ+ and 305 non-LGBTQ+ — with college students making up two-thirds of the participants. The group separately surveyed 194 college, high school and middle school counselors and administrators.

The pandemic only exacerbated these discrepancies, the report found. Nearly all the counselors and administrators surveyed said that COVID-19 worsened symptoms of depression, anxiety, loneliness and difficulty coping with stress among LGBTQ+ students. Eighty-six percent named anxiety as the top-presenting issue among the LGBTQ+ students they served over the past six months, 84 percent cited depression and 75 percent listed “family concerns” — including fear of coming out and acceptance of their identity — as the biggest concern among their LGBTQ+ students.

“Colleges, specifically, were safe havens for many LGBTQ+ students because they found LGBTQ+ centers for schools that had them, or they had designated roles, or they had an office of diversity and inclusion where they felt like someone was trying to help,” said Pertuz.

To be sure, where LGBTQ+ students attend college greatly impacts their experience. Half of the students surveyed reported that their high school, college or university is a top LGBTQ+-affirming space. But the report found that students in states that lack protections for LGBTQ+ individuals experienced additional stress and felt less supported by their institutions.

The report comes as Campus Pride, a nonprofit organization that aims to create a safer college environment for the LGBTQ+ community, released its annual list of the worst campuses for LGBTQ+ students. The list of nearly 200 institutions, most of them religiously affiliated, includes Brigham Young University, Malone University, College of the Ozarks and Lee University.

In September, a group of alumni from Lee, a Christian institution in Tennessee, spoke out against a change to the university’s student handbook that excludes the words “gender” and “gender identity” from its antidiscrimination policy. “Cross-dressing” on campus and “same-sex sexual behavior” are banned as well, according to the handbook.

The report found that risk factors for transgender and nonbinary students include gender-segregated facilities, including restrooms, locker rooms and housing, and the inability to put chosen names and pronouns into student information systems. At St. Mary’s College, students staged a sit-in last week due partially to the institution’s cumbersome name-change policy.

Pertuz said one of the worst things institutions can do to LGBTQ+ students is ignore their preferred pronouns and gender identity.

“When students have to continuously remind people what their pronouns are and how important that is, and people are dismissive about it … I think that’s really harmful,” Pertuz said. “Because I think they’re not only dismissing someone for who they are, they’re not even showing that they’re trying to help.”

Pertuz said one of the biggest findings in the report is that while institutions want every student to succeed, some are misinformed or harbor misguided beliefs on how to help LGBTQ+ students.

“If you truly believe that you want to support LGBTQ+ young people, then you might have to consider for a moment putting your personal belief aside to really see who is in front of you,” Pertuz said. “Get the training, the knowledge and the information that would truly serve the LGBTQ+ student population without worrying about morals and what’s wrong and what’s right.”

According to the report, LGBTQ+ students want their institutions to have a clear process for reporting, responding to and remediating victimization, and to establish nondiscrimination policies that include sexual orientation, gender identity and gender expression. Institutions should also provide LGBTQ+-focused training and education to students, faculty, staff, coaches, administrators and board members and offer focused services, academic curricula and residential communities for LGBTQ+ students.

Specifically for higher education, the report recommends encouraging all students to acquaint themselves with LGBTQ+ resources on campus. It suggests using an incentive like a gift card or credit to the campus bookstore to get students to visit their institution’s LGBTQ+ office. “Familiarizing students with the resources available to them may very well increase the likelihood that they will refer back to them in a time of need,” the report states.

Pertuz said there’s a misconception that because LGBTQ+ people have more visibility in society, they are generally safer. She pointed to a rise in anti-transgender legislation.

When Do Mental Challenges Require a Therapist Consultation?