by Shannon Werner
in Featured, Uncategorized
1 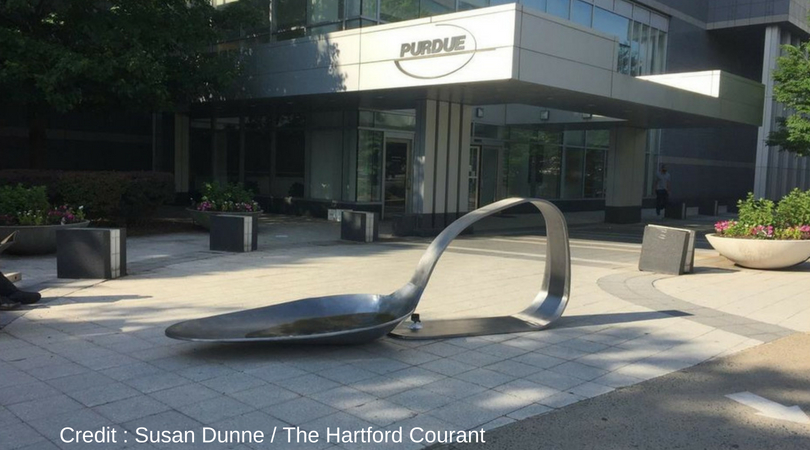 Art imitates life as they say, and artist Fernando Luis Alvarez brought a depiction of daily life right to pharmaceutical executives front door. Last Friday Alvarez installed an 800-pound reminder of Perdue Pharma’s legacy unleashed onto millions of Americans over the past decade, a bent spoon with what looks like the remnants of burnt heroin on the ladle. The sculpture is titled “Perdue.”

Perdue’s spokesperson Robert Josephson released a statement that Friday morning, “We share the protesters’ concern about the opioid crisis, and respect their right to peacefully express themselves. Purdue is committed to working collaboratively with those affected by this public health crisis on meaningful solutions to help stem the tide of opioid-related overdose deaths.”

Alvarez was subsequently arrested later that day after unloading the 800 pound steel spoon, one of his first acts of “guerrilla art” in what he plans to be one of many unauthorized protests against the pharmaceutical corporations. Stamford art gallery owner Alvaraez calls his campaign the “Spoon Movement.” The sculptures’ creator Domenic Esposito, a boston artist, has a personal connection to the movement, his brother’s opioid addiction began with OxyContin and Percocet.

“That was the whole strategy we created for this. We are going after pharma companies, distributors, politicians and doctors,” said Alvarez. “Every time we go to a new company we will have a new spoon. That spoon will be taken away by the cops and I’ll get arrested and after that they will give it back and we will donate the spoon to a city that is suing the companies.”

Alvarez was arrested following the protest, and is set to return to court on July 10th, to face his misdemeanor criminal charge of obstructing free passage, which he was charged with after refusing to remove the sculpture. Following his arrest, his movement went viral, bringing his gallery’s opening 1,000 visitors, 600 more than normally seen on an opening night. It was removed by police two hours after it was placed in front of the building. Once the sculpture is returned to him, he plans on donating it to the city of Boston.

He feels strongly towards the medication company, calling out their massive profits accumulated at the expense of millions of addicted Americans, “There are many players here: the corporation, politicians, doctors, universities, museums. They should all be held accountable,” Alvarez said. “If people feel uncomfortable seeing the Sackler name, they should speak up.”

You can visit OPIOID: EXPRESS YOURSELF at Alvarez’s Gallery, 96 Bedford St. in Stamford, Connecticut until July 30. flalvarezgallery.com.