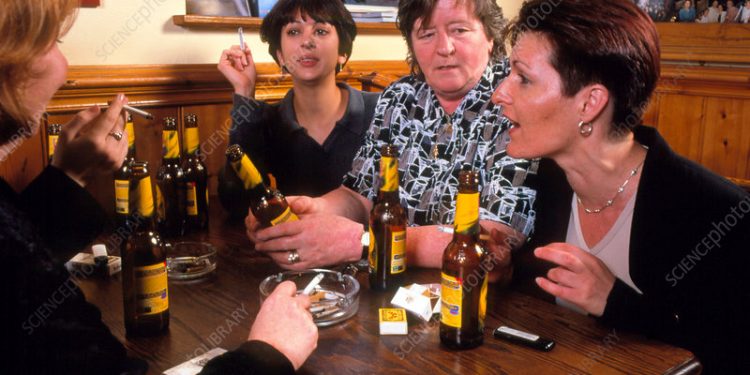 Drinking in bar. Women drinking alcohol and smoking tobacco cigarettes in a bar or public house (pub). While drinking alcohol in moderation is relatively harmless, consuming large amounts can lead to unconsciousness or even death. Alcohol is addictive, leading to alcohol dependence or alcoholism in some people. Severe shakes, hallucinations and convulsions develop in sufferers if drinking is suddenly stopped. Many alcoholics require medical help (detoxification) in getting over these withdrawal symptoms. Smoking tobacco cigarettes has been linked to lung cancer and heart disease.

Many women have an increased risk of alcohol deaths due to considerable changes in drinking habits over the past few decades.

Recent research from the National Institute on Alcohol Abuse and Alcoholism (NIAAA) discovered that over the past two decades, more women had died frequently due to alcohol-related problems.

More Women Are Drinking a Lot of Alcohol

The research originated from a significant investigation for deaths nationally from 1999 to 2017. Its reports indicate that the reasons causing alcohol deaths are due to chronic alcohol use, overdose, or in combination with other drugs or substances.

While also considering population growth, the results also revealed the death rate linked to alcohol increased from 16.9% to 50.9%, which is about 25 deaths per 100,000 people. Remarkably researchers found that the women’s death rate grew exponentially up to 85%.

However, scientists say there is no direct connection to the increase of female deaths from alcohol. Aaron White, a scientific adviser to the NAIII, remarked that alcohol consumption harms women more than men, leading to heart diseases and cancer. Additionally, the most dramatic annual death growth comes from non-Hispanic middle-aged white women.

Everyone Knows About Alcohol Deaths, But Nobody Wants to Discuss the Cause

In 2017 only, 2.6% of approximately 2.8 million deaths in America were alcohol-related. People know about alcohol as a hidden addiction but never want to discuss the issue.

Due to a massive change in women’s drinking habits, there is no precise solution to identify this change. While the confined gender gap within society in the previous decade, it may be an illuminating conclusion of the higher drinking habits among women.

NIAAA advisor stated that women are under an unbelievable degree of pressure with increased opportunities in the workplace. Concurrently, such opportunities have not eliminated other causes of stress that women are likely to face in society. Such consequences have certainly a driving force of the increase in alcohol consumption among women.

Additionally, women not only struggle with pressures to succeed in the workforce, but they face the comparison of unrealistic hopes of physical proportions. These issues arise in places such as media, advertising, and pop-culture, while women still expect to have a fruitful career and a well-rounded family.

Some women have also believed in wrong conceptual messages they hear, allowing them to continue drinking to make their lives sexier or favorable.

For years, women have used advertisements and misleading ideas to deal with their stressors. They also neglect the fact that alcohol is killing more women than before with this truth currently disclosing.

While women continue struggling with the pressures of society, alcohol will remain to be a short-term solution to their problems. However, many discussions are emerging about gender responsibilities, alcohol consumption, recovery programs, and sober living. Such discussions have high expectations that will eventually create solutions and alter alcohol deaths among women.

Can social media cause depression in Young Adults?

Detoxing For a Drug Test: How Drug Users Seek to Trick Chemistry

Detoxing For a Drug Test: How Drug Users Seek to Trick Chemistry