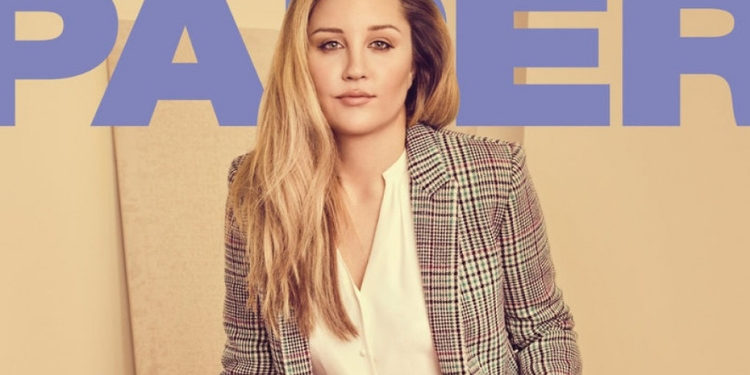 The stage is set for the child star we all grew up to love so many years ago. Amanda Bynes is taking center stage as she is on the cover of Paper magazine. Their winter cover published Monday reveals the mature Bynes wearing jeans and a blazer; several other pages of the spread featured her in high-fashion tops creating a very sophisticated look.

The fresh images are a 180 compared to Bynes’ crazy 20s. Many years filled with rebellious tweeting and frantic public appearances. She suffered from a public break down just like many child stars before her. Bynes now 32, was placed into an involuntary Psychiatric hold and quickly after admitted to a treatment facility under medical experts supervision. Bynes’ mother was then granted conservatorship over her.

Since her meltdown, she has quit acting, been sober and spent the last couple years studying fashion at the F.I.D.M. ( Los Angeles’ Fashion Institute of Design & Merchandising.) thanks to her openness about her destructive past she digging deep into how it really affected her.

Bynes told the magazine, “I started smoking marijuana when I was 16, even though everyone thought I was the ‘good girl,’ I did smoke marijuana from that point on.”

Then admitted to trying harder drugs, “Later on it progressed to doing molly and ecstasy,” she said. “(I tried) cocaine three times but I never got high from cocaine. I never liked it. It was never my drug of choice.”

However the popular “study” drug Adderall crept every so sweetly into her life while she was filming “Hairspray,” she recalls reading an article that referred the Adderall as the ‘the skinny pill’ and talked about how women were taking it to stay thin. Immediately thinking, “ Well, I have to get my hands on this,” Amanda faked having ADD and landed a Prescription from a medical expert know as a Psychiatrist.

According to the Addiction Center, “Adderall works by increasing dopamine levels in the brain. Dopamine, the body’s “feel good” chemical, creates a rewarding effect. Although dopamine occurs naturally, drugs like Adderall produce unnaturally high levels of it. This can cause users to come back for more.”

2010 was the premiere of “Easy A” and Bynes was upset with her appearance in the film. “I saw it and I was convinced that I should never be on camera again and I officially retired on Twitter, which was, you know, also stupid.”

But just like every start of an addiction Bynes never saw the true impact the drugs started had on her overall wellbeing. According to her interviews Amanda says, “ I got really into my drug usage” and “was just stuck at home, getting high, watching TV and tweeting.”

The past four years Amanda has remained sober and thanks her mother and the treatment program that she has attended, “Those days of experimenting with those drugs are completely over with I’m not sad about it and I don’t miss it because I feel ashamed of how it went and how it made me act.”

Her embarrassment over her infamous Twitter rants is felt through reading her interview, although she expresses how she will not dwell on them.

“I’m really ashamed and embarrassed with the things I said. I can’t turn back time but if I could, I would. And I’m so sorry to whoever I hurt and whoever I lied about because it truly eats away at me. It makes me feel so horrible and sick to my stomach and sad,” Bynes told the magazine. “Everything I worked my whole life to achieve, I kind of ruined it all through Twitter… It’s definitely not Twitter’s fault — it’s my own fault.”

She has hopes of acting again sometime in the near future.

Amanda tells USA weekly, “I have no fear of the future,” she says. “I’ve been through the worst and came out the other end and survived it, so I just feel like it’s only up from here.”