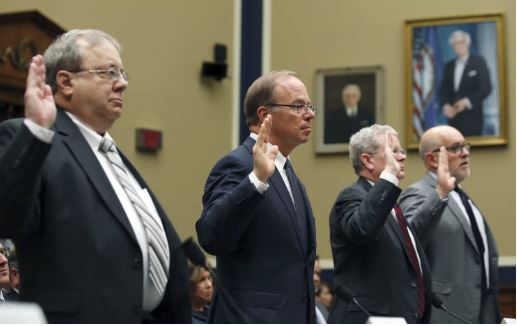 After the past three years of quiet from the opioid epidemic’s silent partner, Five heads of major drug distribution companies met at a congress subcommittee to testify in front of a group of congressmen tasked with investigating the rampant health emergency currently facing North America.

Executive chairman of Cardinal Health, George Barrett expressed his sympathy saying he is sorry the company did not act faster to impede the shipping of millions of hydrocodone and oxycodone pills to two small pharmacies in West Virginia, but later failed to take responsibility for his part in the problem. West Virginia is home to the nation’s highest overdose death rate due to opioids, adding to the tens of thousands killed around the country.

“With the benefit of hindsight, I wish we had moved faster and asked a different set of questions,” Barrett said. “I am deeply sorry we did not. Today, I am confident we would reach different conclusions about those two pharmacies.”

The five men answered specifically to the House Energy and Commerce Committee oversight panel on Tuesday, each individual having their own explanation for their companies’ contribution and denying their direct involvement in their own unique way.

When Rep. Gregg Harper (R-Miss.), chairman of the panel, asked the executives whether they believe the conduct of their companies contributed to the widespread opioid problem, he and three others denied it.

“No,” Barrett said, joining all others except Joseph Mastandrea, chairman of the board at Miami-Luken, who replied: “Yes.”

The House Energy and Commerce Committee panel had spent the past year investigating a claim of ‘pill dumping’ in West Virginia by wholesale drug distributors. The panel revealed in letters sent back in February that McKesson and Cardinal Health shipped 12.3 million doses of powerful prescription opioids to the Family Discount Pharmacy in Mount Gay-Shamrock, W.Va., from 2006 to 2014. The panel has also begun looking into deliveries Cardinal made to the Hurley Drug Company in Williamson, W.Va., because of the 10.5 million pills during that same time period it received. A single pharmacy in the small town of Kermit, W.VA with a population of around 400 people, received nearly 9 million hydrocodone pills over the course of two years.

Wholesale drug distributors are required by law to submit suspicious drug orders to the DEA when a large order comes in. When orders and sales are incorrectly reported, black markets profit from the lack of oversight when prescription pills flood into the market and drive up illicit drug prices.

Cardinal denied distributed hydrocodone or oxycodone to the pharmacy in Mount Gay-Shamrock since 2012 or to Williamson since 2014.

“I am so frustrated for the people in West Virginia and across this country that you all have not . . . stepped up and took more responsibility for this,” Rep. David B. McKinley (R-W.Va.) said to the distributors. “The fury inside me right now is bubbling over.”

The hearing room was packed with attorneys, lobbyists and staffers for the drug companies alongside lawyers for counties, towns and cities that are suing the companies — a massive case that has been consolidated in Cleveland, with many distributors as defendants. Municipalities are seeking damages to help them pay for the cost of opioid addiction, which has decimated budgets and strained resources. All but one executive said they have personally met with people affected by opioid addiction.

Lawyers representing the municipalities said their cases will show that the distributors skirted their legal responsibility in order to profit.

“They continue to deny taking responsibility for their willful disregard for the law and for allowing the flood of addictive opioid drugs onto streets across America,” said Troy Rafferty, who represents the plaintiffs. “Not only are these people civilly liable, they’re criminally liable — prosecutors need to get involved.”

The chief executive of the Healthcare Distribution Alliance, John M. Gray, runs the trade group that represents distributors, said in a statement that the companies understand the “tragic impact” of opioid abuse, but “we need to be realistic and acknowledge that this epidemic was not caused by distributors who neither prescribe, manufacture, nor dispense medicines.”  He then said the root of the problem lies in “decades of belief that opioids could be prescribed with little risk.”

The executives pointed the blame at doctors, who they said overprescribed painkillers, and the licensed pharmacists who dispensed them.

“I want to know whether you all should be held to account, because if the doctors and the pharmacies are being held responsible, I sure as the dickens think you all have a role in this thing too,” McKinley said.

McKinley asked John Hammergren, the chair, president and chief executive of McKesson, if he regrets his company’s role in the crisis.

“I don’t know how you can look at this crisis and not feel terrible about what is going on in this country,” Hammergren said.

Hammergren said his company (McKesson) distributed about 151 million doses of oxycodone and hydrocodone in West Virginia between 2007 and 2012, calling it “a fraction of the nearly 2 billion doses” of all prescription medicines McKesson distributed in the state during that same time frame.

“Put another way, West Virginia pharmacies overall were, and continue to be, very high-volume customers for prescription drugs generally,” he said.

Committee members said they could not understand why so many painkillers were distributed in such places.

Cardinal Health was fined $44 million in 2016 to resolve allegations that it failed to report suspicious orders of narcotics. Before that, Cardinal paid a $34 million fine to settle similar allegations in 2008.

Rep. Kathy Castor (D-Fla.) asked Hammergren why McKesson kept shipping massive quantities of opioids to small towns despite having agreed to the terms of the settlements.

“You saw paying the penalties on the settlement agreements was a cost worth paying because you were making so much money?” she asked. Hammergren replied: “Any settlement with a regulator, we take very seriously.” He was also asked how much the company makes from two drugs that are used to reverse opioid overdoses and that have risen steeply in price in recent years. Hammergren said he does not know.

McKinley placed the blame on the corporation heads, and wondered aloud what the punishment should be for helping create a crisis that kills 900 people in West Virginia each year saying;

“I just want you to feel shame about your roles, respectively, in all of this.”