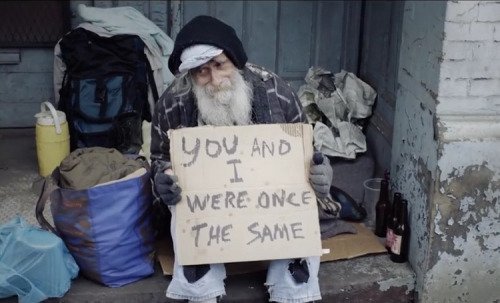 Southern California draws attention from travelers everywhere. The mild weather and the year-round summer season tend to bring those from colder climates to think its residents live in a constant paradise. Recovery centers sell the lifestyle that has been produced in expensive commercials on high end television shows. Those looking for a new sober life flock to the recovery sites for help, and then they discover the hard truths that come with California living.

Tyler McCollough traveled 1,300 miles from his rural Arkansas home to find help for his heroin addiction. He found a recovery center online on the coast of California, hoping to kick his habit. He left behind his construction job and work on his family’s ranch after he was given a complimentary plane ticket and free treatment. Five months later, his insurance ran out and he was ousted to the streets. He’s been living on the streets for two months now, and admits to committing crimes to feed his habit.

“I sell drugs. And I steal things and sell them.”

He is just one of the homeless population that has grown to be out of control in Southern California. Most people are aware of the infamous Skid Row in Los Angeles, but cities in Orange County, Riverside, San Bernardino and Los Angeles are now collecting ‘Skid Row’s of their own.

Officials have looked for the cause of such large influxes in the homeless population around the region. What connection exists between the outsized number of rehab centers in Southern California and the region’s fast-growing homeless population? Some evidence suggests that a portion of the growth can be connected to the rehab industries aggressive recruitment tactics. Centers see a patient as a $10,000 payout and leave the details to the devil.

The counties of Riverside, Los Angeles, San Bernardino and Orange have been examining possible connections to the rehab industry. In the coastal region of Costa Mesa and San Juan Capistrano, government officials and residents alike are seeking definitive links.

Hilary Aquino of the Skid Row Adjacent Exodus Recovery “Sobering Center” says she’s noticed something different in the 2017 year. Many of the homeless addicts who visit the county funded center came her from other states for drug treatment programs.

“They end up getting stuck, homeless, in Los Angeles,” She says.

Interstate recruitment of addicts has been so overwhelming that federal lawmakers and officials from California have started to explore how to crack down on the abuses by the treatment industry.

Neighborhoods have felt the wave increases in their own backyards. Phil Mutt, 59, a retired Costa Mesa auto mechanic lives few houses away from a recovery home and blocks away from a hangout where homeless addicts frequent. He’s seen people selling drugs on his once tranquil block that he’s lived on for more than 30 years. This month his car was burglarized.

“The city feels a lot less safe than it used to,” Mutt said.

Orange County officials and police say the homeless population has grown over the past two years after the state passed Prop 47, the voter approved measure that pushed thousands of low level offenders from state prisons to community based supervision programs.

Out of state rehabs are spending more on national marketing campaigns to attract out of state users, where the rate of opioid abuse is tremendous. While the treatment centers get their customer, the user is now miles away from their families and support systems. The treatment centers hold little regard for what happens after detox and residential treatment.

Their data showed only 5% of the 1,105 homeless people surveyed acknowledged that they had been in some type of local rehab prior to living on the streets. Many city workers believe the true number is much higher, but because many of the homeless refused to participate in the survey, the numbers are much lower.

Costa Mesa city leaders suggest that the former rehab clients living on the street have directly contributed to the increase crime rates in their town. Since 2010, the number of licensed treatment centers have doubled, and that’s not including the hundreds of sober living homes.

Over the last 6 years, ending in 2016, Costa Mesa’s property crime increased by 41%, burglaries rose 62% and auto thefts doubled, all according to FBI data.

Los Angeles hasn’t invested as much into the link between homeless and rehabilitation. But city officials say they are seeing what Costa Mesa has seen, based on numerous and complex numbers from annual tallies which make a definitive answer difficult. This year, a report shows L.A’s homeless population grew 23% from 2016, the number of unsheltered youth rose to 81%, a number of 4,536. The number of homeless who’s last residence was out of state increased by 21%.

Down the coast in southern Orange County, sheriff’s officials said homelessness has increased in recent years, in tandem with an influx of new drug treatment centers.

“They’re from out of state – out east or down south – and for the most part, they become part of our permanent homeless population,” Himmel said.

“And they are committing a large number of petty crimes to support their habits,” he added.

But data on any link between rehabs and homelessness isn’t easily available, in part because rehab operators have gone to court – and won big money – from cities that try to regulate the industry.

The lack of data has left officials guessing about if and how the rehab industry has changed or expanded the local homeless population.

The number of people identified as both homeless and recent rehab patients is relatively low, perhaps 100. That would be a small fraction of the total number of homeless people in Orange County, which last year was pegged at 4,792. But it could account for a more considerable share of the newly homeless, which the county says is 340 people.

Money is driving addicts from the East Coast and Midwest to California and other states with high concentrations of rehabs. Some local officials say systemic failures in California’s treatment industry, coupled with the relaxation of penalties for some drug violations, encourages out-of-state addicts to stick around.

An investigation this year held by the Southern California News Group found that treatment patients can be worth hundreds of thousands of dollars in medical payments from insurance companies. That bounty has spawned a secondary industry of so-called “junkie hunters” who receive kickbacks for selling addicts from around the country to the highest-bidding rehab facility, regardless of its quality of treatment. California’s lax oversight has allowed many rehabs to be operated by people with insufficient training, state investigators found.

Rehab programs often consist of initial stays in a licensed treatment center, followed by a period in sober living homes, which are largely unregulated environments that can be rife with drugs. When the insurance money runs out, some homes kick patients to the streets without follow-up support.

Upwards of 60 percent of people who get treatment for drug abuse relapse, according to the National Institute on Drug Abuse, a federal research center. The institute states that “long-term follow-up” is crucial to successful addiction treatment.

Many elected officials support the changes, which are meant to emphasize community rehabilitation programs over incarceration. They note no significant research studies have established links between increased crime or homelessness and criminal justice system reforms.

But the shift of addicts to Southern California isn’t likely slowing down, industry observers say. That’s partly because of the state’s efforts to expand health insurance availability. Out of state addicts are allowed to acquire health insurance coverage for drug treatment through a state-sponsored marketplace the day they arrive. And some recovery programs have paid the premiums – sometimes illegally – because they’ll make thousands in profits through billings, authorities say.

It seems like a cycle that is unable to break, high profits and low morality makes a breeding ground for the lax care of addicts. Eventually regulations will come into play to help these people seeking a chance at a better life from being taken advantage of and released with no coping skills or support. For now, it will continue, on your street corners and in your neighborhoods. Try to think with compassion when you see someone who’s story didn’t play out as your own. We all know someone who could use a helping hand.