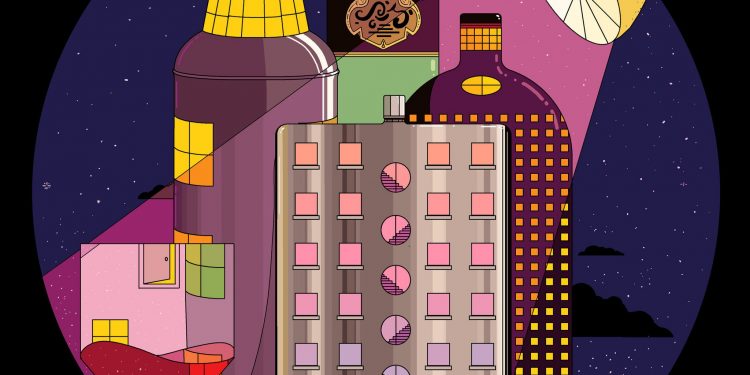 Even before the pandemic began, some Americans were drinking significantly more alcohol than they had in decades past — with damaging consequences. In 2020, researchers at the National Institute on Alcohol Abuse and Alcoholism (N.I.A.A.A.) found that from 1999 through 2017, per capita consumption increased by 8 percent and the number of alcohol-related deaths doubled, many caused by liver disease. The trends are particularly concerning for women: Whereas the number of men who reported any drinking stayed mostly the same, the proportion of women who did so increased 10 percent, and the number of women who reported binge drinking, or consuming roughly four or more drinks in about two hours, increased by 23 percent. (For men, binge drinking is about five or more drinks in that period.) Current dietary guidelines consider moderate drinking to be at most one drink a day for women and two for men.

So researchers were understandably apprehensive when, early in the pandemic, alcohol sales spiked. They were especially concerned about women, because similar quantities of alcohol affect them more adversely than men, making them more likely to suffer injuries from accidents and to develop chronic illnesses like liver and heart disease and cancer. But it was unclear whether increased sales would translate into increased consumption. Perhaps Americans were hoarding alcohol as they were toilet paper.

A growing body of research, however, has begun to confirm that Americans, and women in particular, are indeed drinking more in response to the pandemic. In December, researchers from Johns Hopkins Bloomberg School of Public Health and the University of Maryland, Baltimore County, published the results of a survey they conducted last May in The International Journal of Environmental Research and Public Health. They found that of the more than 800 respondents — those who replied to the online questionnaire were mostly white women — 60 percent were drinking more compared with before Covid-19 (13 percent were drinking less). More than 45 percent of participants said their reasons for drinking included increased stress. And those who reported feeling “very much” or “extreme” stress from the pandemic reported drinking more on more days than those who were less affected. Another survey conducted this February by the American Psychological Association found that nearly one in four adults reported drinking more to manage pandemic stress. Though stress has long been a common reason people turn to alcohol, the extent to which it appeared to cause increased consumption during the past year was startling, says George Koob, director of the N.I.A.A.A. “It shouldn’t have been a surprise, but it did surprise us, this drinking to cope.”

That trend is especially alarming because previous research suggests that people who drink to cope — as opposed to doing so for pleasure — have a higher risk of developing an alcohol-use disorder, which is the inability to stop or control drinking even when it causes harm. Alcohol can be calming in the short term: It slows activity in the amygdala, the area of the brain that readies the body’s “fight or flight” response to real or imagined stress by increasing heart rate and blood pressure and amplifying our awareness of threatening stimuli. But over time, alcohol’s dampening effect on the amygdala decreases, while the region itself becomes “hyperactive in between bouts of drinking,” according to Aaron White, a senior scientific adviser at the N.I.A.A.A. Achieving the same level of relief requires drinking more, and more often.

There are already indications that groups feeling the most pandemic-related stress are seeing greater increases in alcohol consumption. A survey of 12,000 physicians, for instance, found that more than 40 percent were experiencing burnout, very likely amplified by the pandemic, and of those, more than a quarter were drinking to deal with it. And though pre-pandemic research showed that parents were less likely than people without children to engage in risky levels of alcohol consumption, parents appear to be among those drinking more now — especially if their children are engaged in remote schooling.

The most worrisome drinking behavior, as before the pandemic, appears to be among women, who have also borne more of the child-care burden created by school closures. A study published in October in The Journal of Addiction Medicine found that between February and April 2020, women had a greater increase in excessive drinking than men did. Respondents who are Black reported greater increases, too. A November study in the journal Addictive Behaviors, based on an April survey that asked about people’s drinking during the previous month, found that women drank more than men in response to pandemic stress, to the point that their intake levels were roughly equal. “I left that study with more questions than answers,” says Lindsey Rodriguez, the paper’s lead author and a psychologist at the University of South Florida. “Is it because of home-schooling? Uncertainty about the future? High pressure in more domains of life? Women were disproportionately affected by all things Covid-19. This is another way of showing the effects of that.”

Previous disasters, including the 9/11 terrorist attacks, the 2003 SARS outbreak and Hurricane Katrina, have been followed by increases in alcohol abuse among those who experienced them and their aftermath. But researchers have never studied the impact on drinking behavior of a catastrophe that lasted as long and was as pervasive as the current pandemic. Nor did those earlier events increase social isolation while also initiating widespread changes in the availability of alcohol through takeout and delivery, as Covid-19 has. There has been more drinking at home, which is associated with domestic violence and child neglect, Carolina Barbosa, a behavioral health scientist at RTI International, a nonprofit research organization, points out. “So it’s not just the health of the person who is drinking that we are concerned with,” says Barbosa, the lead author of the Addiction Medicine study, “but it’s also the social impact on the family and society in general.”

Those potential repercussions — on everything from individual health to poverty, crime and violence, which have previously been associated with the density of alcohol sellers in a given area — will take time to unfold and assess. Right now, most of the data available on people’s changes in drinking behavior are limited to small surveys. “This all suggests people are starting to put in place patterns of heavier drinking,” says Elyse Grossman, a policy fellow at Johns Hopkins and lead author of the International Journal article. She expects to start seeing the effects one to three years from now, which is when alcohol abuse increased following other catastrophes. (Already cases of alcoholic liver disease are up an estimated 30 percent over the past year in the University of Michigan’s health system, and many of those additional patients were young women.)

Yet despite the worrying circumstances, at least 20 states are considering making permanent the relaxed alcohol rules they put in place during the pandemic. And alcohol manufacturers have exploited Covid-19 as a marketing tool to an extent that is “frustrating and surprising,” Grossman says. “They have used the pandemic to increase sales and oppose regulation. ‘You need time to yourself; you should be drinking. You need alcohol to relax; you need it to get through this pandemic.’” She adds: “It’s not an ordinary product, like coffee or pencils. It’s the third-leading cause of preventable death in the U.S.”

On a population level, this past year’s drinking has already set in motion a cascade of consequences that would be difficult to reverse absent major policy changes. But individuals can take steps to avoid negative outcomes themselves. Koob says that the emergence of telehealth during the pandemic may be a “silver lining” that will allow physicians and support groups to reach more struggling people. Treatments exist on “a spectrum,” he notes. “Not everyone has to go into a 28-day detox.” Doctors and health officials should begin responding now, with initiatives like screening for people’s drinking patterns and “better messaging” on what is excessive drinking, Barbosa says. “There are more people who are going to need help.”

Macklemore opens up about his 2020 relapse to Dax Shepard: 'The disease of addiction is crazy'