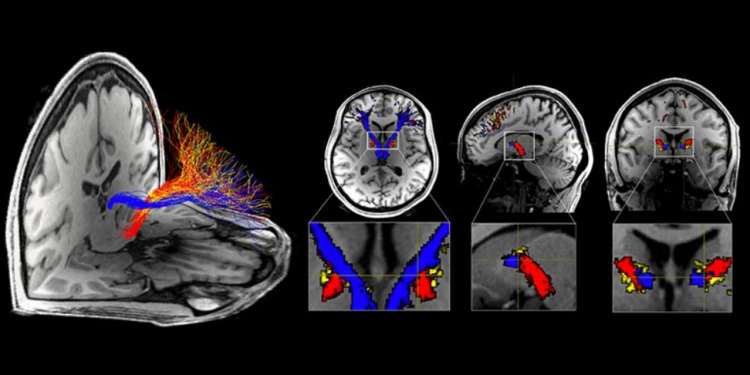 New York, NY October 06, 2022 – White matter in the brain that was previously implicated in animal studies has now been suggested to be specifically impaired in the brains of people with addiction to cocaine or heroin, according to a study conducted by researchers from the Icahn School of Medicine at Mount Sinai and Baylor College of Medicine. The study was published October 6 in The study looked at the connectivity of the tract between the prefrontal cortex (PFC), a brain region critical for regulating higher-order executive functions, and the habenula, a region that plays a critical role in reward and reward-associated learning. The habenula has emerged as a key driver of drug-seeking behaviors in animal models of addiction. Specifically, signaling from the PFC to the habenula is disrupted in rodent cocaine addiction models, implicating this PFC-habenula circuit in withdrawal and cue-induced relapse behaviors. However, until now, the PFC-habenula path has remained poorly understood in the human brain. Furthermore, its involvement in the neuropathological effects of drugs other than cocaine has not been previously explored.

“In addition to identifying microstructural differences, specifically reduced coherence in the orientation of the white matter fibers in the cocaine-addicted group that comprised both current cocaine users and those with short-term abstinence, we extended results beyond cocaine (a stimulant) to heroin (an opioid), suggesting that abnormalities in this path may be generalized in addiction,” said Sarah King, a PhD student in Neuroscience in the Graduate School of Biomedical Sciences at Icahn Mount Sinai, who led the analyses and is first author of the paper. “Importantly, we found that across all addicted individuals, greater impairment was correlated with earlier age of first drug use, which points to a potential role for this circuit in developmental or premorbid risk factors.”

The results advance ongoing research in the field by targeting a previously unexplored circuit in the pathophysiology of addiction in humans, where deficits may predispose an individual to both the development of drug addiction and to relapse and which may be potentially amenable for individually tailored treatment or prevention efforts.

Ranked 14th nationwide in National Institutes of Health (NIH)  funding and among the 99th percentile in  research dollars per investigator according to the  Association of American Medical Colleges, Icahn Mount Sinai has a talented, productive, and successful faculty. More than 3,000 full-time scientists, educators and clinicians work within and across 34 academic departments and 35 multidisciplinary institutes, a structure that facilitates tremendous collaboration and synergy. Our emphasis on translational research and therapeutics is evident in such diverse areas as genomics/big data, virology, neuroscience, cardiology, geriatrics, as well as gastrointestinal and liver diseases.

Icahn Mount Sinai offers highly competitive MD, PhD, and Master’s degree programs, with current enrollment of approximately 1,300 students. It has the largest graduate medical education program in the country, with more than 2,000 clinical residents and fellows training throughout the Health System. In addition, more than 550 postdoctoral research fellows are in training within the Health System.

A culture of innovation and discovery permeates every Icahn Mount Sinai program. Mount Sinai’s technology transfer office, one of the largest in the country, partners with faculty and trainees to pursue optimal commercialization of intellectual property to ensure that Mount Sinai discoveries and innovations translate into healthcare products and services that benefit the public.

Icahn Mount Sinai’s commitment to breakthrough science and clinical care is enhanced by academic affiliations that supplement and complement the School’s programs.

Through the Mount Sinai Innovation Partners (MSIP), the Health System facilitates the real-world application and commercialization of medical breakthroughs made at Mount Sinai. Additionally, MSIP develops research partnerships with industry leaders such as Merck & Co., AstraZeneca, Novo Nordisk, and others.

The Icahn School of Medicine at Mount Sinai is located in New York City on the border between the Upper East Side and East Harlem and classroom teaching takes place on a campus facing Central Park. Icahn Mount Sinai’s location offers many opportunities to interact with and care for diverse communities. Learning extends well beyond the borders of our physical campus, to the eight hospitals of the Mount Sinai Health System, our academic affiliates, and globally.