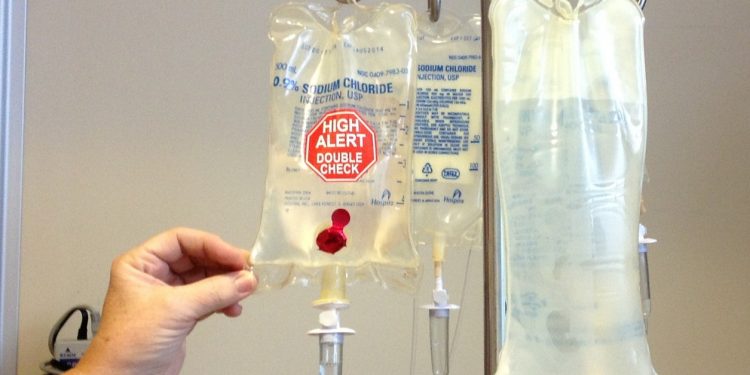 Preoperative preparation for hypoglycemia or hyperalimentation should include an extensive assessment by a multidisciplinary team. This team must understand the complex relationship between glucose and insulin, and the effects of surgery and anesthesia on the patient’s blood glucose. Patients should also be provided with extensive preoperative education and patient resources, such as eMedicineHealth’s Diabetes Center.

During the perioperative period, patients should receive 150 to 200 ml of pure fruit juice or original Lucozade. Optimal fluid intake should be individualized based on clinical judgment. Medications for preoperative hyperglycemia are available through the ICU, but the doses should be adjusted in advance of surgery.

While the optimal perioperative glucose concentration has been the subject of debate for more than 40 years, the current recommendation is five to 10 mmol/L. This is the same range as the level that should be maintained during surgery for patients with type 1 diabetes. If this level is exceeded during surgery, the patient should receive an intravenous insulin infusion. The glucose level should be monitored every 1 to 2 hours during the surgery. The patient should continue to be monitored during the postoperative period to monitor any lingering hypoglycemia and hyperglycemia.

The anticatabolic effects of intravenous hypocaloric nutrition have been reported in various studies. Researchers have investigated the effects of branched chain amino acids on the postoperative endocrine response. Branched-chain amino acids have also been shown to reduce postoperative catabolism. Researchers have also studied the effects of growth hormone and glutamine on patients with critical illnesses and cardiac surgery.

The pathophysiology of the catabolic response to surgical stress is still unclear. However, key clinical features of perioperative catabolism are hyperglycemia, loss of body proteins, and insulin dysfunction. Although the optimal glucose concentration is unknown, most medical societies recommend treating hyperglycemia. In addition, the avoidance of preoperative fasting may speed up the recovery time from major abdominal surgery.

It is now common practice that critically ill children arrive in the operating room with hyperalimentation solutions infusing.

Is TPN the same as hyperalimentation?

Hyperalimentation, also known as total parenteral nutrition (TPN), is used for persons with medical conditions that impair gastrointestinal absorption to a degree that can be incompatible with life.

What is a Hyperalimentation solution?

Hyperalimentation is a form of nutrition that is delivered into a vein. Hyperalimentation does not use the digestive system. It may be given to people who are unable to absorb nutrients through the intestinal tract because of vomiting that won’t stop, severe diarrhea, or intestinal disease.

Optimising preoperative preparation for anemia with hyperalimentation is a significant aspect of preoperative care. Its goal is to limit the need for allogeneic blood transfusions, which have negative outcomes and can be expensive. The optimal anemia management strategy should include an appropriate history and physical.

The occurrence of preoperative anemia in surgical patients is common and has been associated with adverse clinical outcomes. The goal of optimizing the mass of red blood cells during surgery has become one of the three pillars of perioperative blood management. There is a shift from the traditional allogeneic approach to nontransfusional strategies to emphasize hematinic and nutrient supplementation.

Optimal preoperative preparation for anemia with hyperalimentation requires weaning from hyperalimentation to lower concentrations. This process should include periodic monitoring of serum glucose levels to prevent hypoglycemia and hyperglycemia. In addition, patients should be weaned off glucose-containing solutions by a 10% concentration. This reduces the risk of hypoglycemia and helps ensure the safety of intraoperative administration.

Treatment of anemia with hyperalimentation is one way to treat this condition. People with hemolytic anemia may receive blood transfusions or injections of erythropoietin, which help the body produce red blood cells. In more serious cases, patients may need a bone marrow transplant. In addition, certain medications may be prescribed.

Anemia is a common problem that affects many people, and can affect many parts of your body. When hemoglobin is low in your blood, you may feel tired, pale, and cold. The condition can shorten your life and can cause depression and confusion in older adults. It can also affect your weight. If you’re already overweight and don’t realize it, anemia can cause you to lose weight.

Children are especially likely to require large amounts of iron during growth spurts, and they may be more likely to have anemia than adults. In infants, iron can be difficult to absorb from breast milk or formula, which makes supplementation of iron more essential. Additionally, older adults may have anemia because their diet is low in iron. They may also be on blood thinners, which can lead to anemia.

The use of supplemental iron is not recommended for all patients with anemia. It’s crucial to assess the severity of the anemia and make an informed decision on whether hyperalimentation is right for the patient. Clinical trials have shown that hyperalimentation does not cure anemia, but it can help improve the condition of the patient.

Anaemia is a public health problem that affects many children and pregnant women around the world. The World Health Organization estimates that 42% of children under five and 40% of pregnant women suffer from anaemia. The best way to identify anemia is to get a blood test. This test measures the number of red blood cells in your blood and determine their size and shape. In addition, the blood test also determines whether you are deficient in iron or other vitamins.

Hyperalimentation is a good option for treating anemia in critical care. While oral iron supplements are equally effective, intravenous iron has been shown to replenish iron stores more effectively.

Treatment of anemia with hyperalimentation

Anemia can be caused by a deficiency in vitamins and minerals, such as iron. If the anemia is severe, medical professionals may use IV therapy to boost red blood cell production. Dietary changes, vitamin supplements, and exercise may also help treat anemia. Patients suffering from iron deficiency anemia may also take bone marrow or blood transfusions.

The first step in treating anemia is to get a complete blood count. This test will show the size, number, and shape of red blood cells in the blood. The results will also indicate how much iron is in the blood. Vitamin C and iron-rich foods may help the body absorb iron.

Anemia can cause a host of symptoms, including fatigue, a cold feeling, pale skin, and brittle nails. In the most serious cases, it can lead to heart complications. Patients may also lose weight as a result of anemia. It can also result in depression. Getting the proper treatment can help you live a healthy life.

Anemia can be caused by an inherited disease or acquired condition. People may also experience a reaction to certain drugs or substances that affect the body’s red blood cells. The most common types of anemia are iron-deficiency anemia and sickle cell anemia. Approximately two billion people worldwide suffer from some form of anemia. In the United States, anemia is the most common type of blood disorder and affects over three million people.

Children and infants need more iron during growth spurts. Once they have been weaned from breast milk and formula, infants may get less iron in their diet because iron from solid foods is not as easily absorbed by the body. Furthermore, older people may be at risk for developing anemia because of their age or chronic diseases. They may also be taking blood thinners that lower the iron content of their blood.