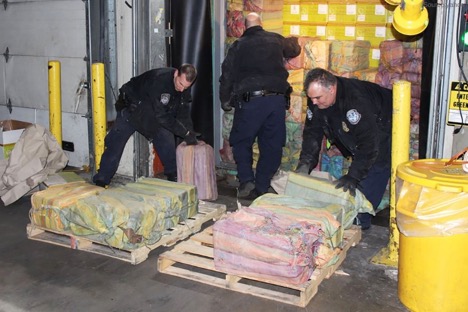 Monday morning the agency known as  U.S. Customs and Border Protection announced that authorities had seized more than 3,200 pounds of cocaine worth an estimated $77 million inside a shipping container that arrived at the Port of Newark just a few weeks ago, the biggest bust within the last 25 years.

According to the reports, February 28th the massive discovery happened when authorities checked a shipping container entering the country and found 60 packages containing a white powdery substance that turned out to be cocaine, according to the authorities.

The customs agency then reported that they turned the cocaine over to the U.S. Department of Homeland Security. Officials said that The New York Police Department, New York State Police, the U. S. Coast Guard, Homeland Security Investigations and the Drug Enforcement Administration also took part in the investigation and gave thanks to the help of the United Kingdom’s National Crime Agency.

“This is a significant seizure it is the largest cocaine seizure at the Port of New York/Newark since May 1994” announced Troy Miller, the director of New York Field Operations for Customs and Border Protection during the press conference. “This interception prevents a massive quantity of drugs from getting to the streets and in the hands of our children.”

However, despite the enormous amount of cocaine that was discovered, no charges or arrest were made, authorities announced that the investigation is ongoing. Customs and Border Protection spokesman Anthony Bucci wrote in an email to that the container was recovered from a ship that originated in South America.

Previous to the recent seize the most massive bust at Port Newark in May 1994 resulted in 6,400 pounds of cocaine.

“Cocaine, New York’s nemesis of the ’90s, is back-indicating traffickers push to build an emerging customer base of users mixing cocaine with fentanyl,” said DEA Special Agent in Charge Ray Donovan in a Press interview.  He added, “This record-breaking seizure draws attention to this new threat and shows law enforcement’s collaborative efforts in seizing illicit drugs before it gets to the streets and into users’ hands.”

Another statement from the Captain of the Port of New York and New Jersey, and commander Sector New York, Capt. Jason Tama said, “Successes such as this seizure are a testament to the importance of our partnerships and our ability to work together to keep our ports and our communities safe.”

If someone is looking for treatment close to home, search “Drug Rehab New Jersey  “and use the directory to find a center. For more information, please call our 24-hour hotline, CALL  (888) 510-3898

Amazing Turn Out for the First Annual Pancake Breakfast with the Rams, Sports Giveaways and A Ride!