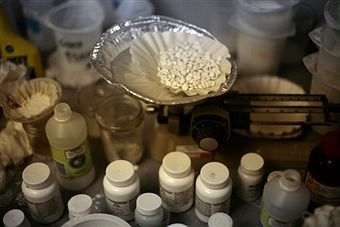 From a 2011 Methamphetamine drug bust in Las Vegas

While the rest of the country is losing its residents to heroin overdoses and incarceration for heroin related crimes, Nevada is fighting the wests’ old familiar drug of choice, Methamphetamine. Nevada is home to the highest amphetamine death rate in the country and also is on the verge of passing the state’s prescription opioid death rate as well.

Out of the 31 states and Washington D.C that were reporting data to the CDC, Nevada took the prize and those working in drug prevention within the state say the news is not surprising.

“I’ve been doing this job six and a half years, and for the last three of four years, we’ve seen the numbers rising,” said Jamie Ross, executive director of the PACT Coalition, a drug prevention nonprofit in Southern Nevada. “It unfortunately doesn’t look like it’s slowing down anytime soon.”

Meth is popular among the west coast states because it is the cheapest thing on the street, alternatively to cocaine or heroin, making it easier to get. Keith Carter, Deputy director of the High Intensity Drug Trafficking Area Program says it’s prevalence is what makes it hard to fight.

“The No. 1 drug seized by all of our task forces is meth,” Carter said. “The meth being manufactured in Mexico is very high quality meth, and very potent.”

Opioid deaths are common because the way the opioids make your body forget to breathe. Heroin can make you very calm and sleepy, and if you consume too much you can fall asleep. While you’re asleep your respiratory drive shuts down and that’s when you can die. If you’re lucky, you can be revived instantly with a dose of Narcan, the powerful opioid overdose reversal medication.

But unlike opioids, people usually won’t overdose using amphetamines alone, said Dr. Jonathan Floriani, a UNLV psychiatry assistant professor who consults at University Medical Center as an emergency psychiatrist. The drugs can cause a heart attack in someone with an underlying heart condition, like an arrhythmia, or stroke in those with high blood pressure. Prolonged use also can lead to kidney failure, Floriani said.

And unlike opioids, there’s no overdose antidote.

Nevada asks if prevention resources were devoted equally to opioid and amphetamine overdose, that could cut down on abuse and, ultimately, death, experts say. In the 1990’s, a national effort to curb methamphetamine production and distribution sent the numbers falling.

“I don’t want one to be more or less important than the other,” Ross said. “I would love if we could have an open and honest dialogue about this.”

What’s needed, said Floriani, is public education that stresses that using amphetamines can be lethal, not just from overdose but because they can impact organ function and can be laced with opioids like synthetic fentanyl, a deadly substance.

Greater access to mental health resources also would help, said Dr. Ramu Komanduri, chief of staff at the VA Southern Nevada Health Care System. Floriani agreed, noting that at UMC ER beds are filled with transient and uninsured or under-insured addicts who must be monitored for days while they withdraw.

“Focusing resources on psychostimulant abuse might alleviate pressure on the mental health system,” he said.