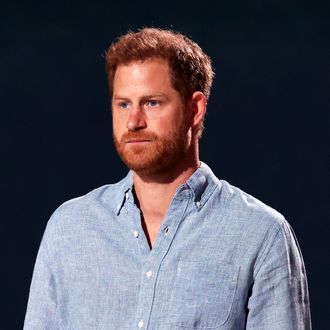 Using his new Apple TV mental health series with Oprah Winfrey to further open up about his personal life, Prince Harry has revealed that he became dependent on alcohol and drugs as a way of coping with the death of his mother, Princess Diana. In the May 21 episode of the series The Me You Can’t See, Harry said that he turned to this lifestyle in his adult years, as he still wasn’t sure how to mentally process the lingering trauma of Diana’s death. “28 to probably 32 was a nightmare time in my life,” he explained. “I would probably drink a week’s worth in one day on a Friday or a Saturday night. I would find myself drinking not because I was enjoying it but because I was trying to mask something.” He continued, emotionally: “I was willing to drink. I was willing to take drugs. I was willing to try and do the things that made me feel less like I was feeling.”

Harry also criticized the parenting style of his father, Prince Charles, as he chose to ignore Harry’s mental health problems and pleas for help during his teenage years. “My father used to say to me when I was younger, ‘Well, it was like that for me, so it’s going to be like that for you,’” Harry recalled. “That doesn’t make sense. Just because you suffered, that doesn’t mean that your kids have to suffer. In fact, quite the opposite. If you suffered, do everything you can to make sure that whatever negative experiences that you had you can make it right for your kids. Isn’t this all about breaking the cycle? Isn’t this all about making sure that history doesn’t repeat itself?” Harry added that until he and his wife, Meghan Markle, stepped down as senior members of the royal family in January 2020 and moved to the Americas, he felt “trapped and controlled” by both the media and his own family. “But certainly now I will never be bullied into silence,” he concluded.