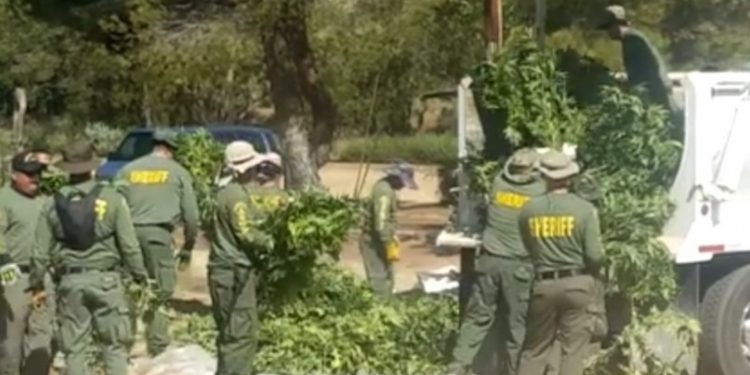 During one of the biggest raids seen in Riverside County, approximately 70 tons of cannabis were seized at more than 100 illegal growing operations across the Anza Valley this week. According to officials, the seized marijuana was buried right after at a landfill in Beaumont.

During the sweep conducted Wednesday, 700 law enforcement served search warrants at almost 118 locations through the area. A Riverside County Sheriff’s Department news release stated that eight people were arrested and 17 firearms were also seized during the raid. The authorities removed 140,877 marijuana plants and 3,037 pounds of process cannabis. The raids got underway between 7 a.m. and 9 a.m., though specific locations were not disclosed. According to the department, the plants carried a value of $189 million.

Anza, a very incorporated area is known to house multiple pot farms, and some residents have been clear about their intent to continue cultivating marijuana regardless of the county’s recent implementation of a long but mandatory process that requires farmers to go through a step-by-step licensing process, which includes background checks and other fines that they need to meet before being granted a city and state compliant licenses.

Following the raids, nothing productive was done with confiscated marijuana. However, the authorities burned all of the 70 tons at Lamb Canyon Landfill in Beaumont, where officials worked past 11 p.m. to dispose of the cannabis — thus getting paid overtime to confiscate a drug that will soon be legal in all 50 states.

The other marijuana-based products found at the scene were also burned on top of the cannabis. According to the announcement made by the riverside country sheriffs department Friday, the raids were done due to concerns of community members about the growing operations and unknown substances within the farms.