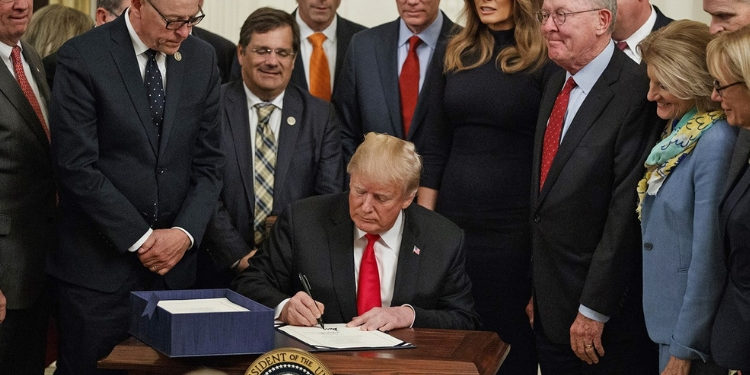 President Donald Trump made a very bold statement at the White House on Wednesday after confronting the individual on live television who mailed the explosives to his Democratic opponents and then heading out to the current Make America Great Again rally in Wisconsin. The main focus was when Trump signed what he called “landmark” legislation to fight the opioid crisis in America, which a year ago he announced a nationwide public-health emergency situation.

October 23, 2018, Trump signed the bipartisan SUPPORT for Patients and Communities Act, which passed the Senate this month on a vote of 98-1. The package of opioid-related measures broadens access to substance-abuse treatment and improves oversight of opioid prescriptions.

The president told grieving mothers and fathers, cabinet members, lawmakers, and representatives of local law enforcement, “Together, We will end the scourge of drug addiction in America. We’re going to end it or at least make an extremely big dent in this terrible, terrible problem.”

Anti-Drug Abuse Act formed in 1988, the ONDCP is expected to collaborate drug-control policy and funding between 16 federal departments and companies. The director of the office is said to be the U.S. president’s “principal consultant” on drug-control problems. The Senate has to validate whomever the president appoints.

Any expert that has studied the epidemic understands the significant negative effects in which an estimated 72,000 people passed away from opioid overdoses in 2017 believes it will do little to nothing.

The bill’s aims to broaden addiction treatment, speed up research study on alternative drugs, and provide Medicaid funding to treatment centers with more than 16 inpatient beds will definitely assist, as will $6 billion in funding to combat opioids, “the most loan has ever gotten in history,” Trump stated.

However, many public-health specialists and some of Trump’s Democratic opponents in Congress say they need close to $100 billion over ten years to end or “make an exceptionally huge dent” in opioid addiction. Senator Elizabeth Warren points out “broken promises” by an administration that still does not have actually a validated director of its Workplace of National Drug Control Policy (ONDCP) after nearly 2 years in the workplace.

Tom Marino, Trump’s very first candidate, withdrew quickly after The Washington Post reported that he had put his support into the legislation that damaged the Drug Enforcement Administration’s ability to secure down on companies engaging in fishy drug shipments.

Trump’s second candidate, James Carroll, the previous White Home deputy chief of personnel, had his hearing before the Senate Judiciary Committee and is awaiting verification. Carroll was first appointed the workplace’s deputy director and after that acting director, however, he needed to quit his title as acting head when Trump officially nominated him to lead the workplace. He remains the ONDCP’s most senior official

The National Drug Control Technique is still set to be released, which explains in detail how the administration will tackle drugs and how it will establish a drug-control budget. Three months after taking office, Trump chose an unconventional approach to drug policy, developing the President’s Commission on Combating Drug Addiction and the Opioid Crisis, with Guv Chris Christie, a Trump political ally, as chair.

The commission, staffed and moneyed by ONDCP, released a report that recommended almost 60 ways to address the crisis. The country’s battle with the opioid crisis has proven to be a difficult issue, the government hopes that with the impact of the opioid legislation it will, in fact, make a difference. Throughout the Obama administration, the ONDCP started to “guide the direction of drug policy away from a punitive method towards a more public-health approach,” says LaBelle.

Many credit the office’s accomplishments to the Affordable Care Act, which, in addition to Medicaid growth, increased the number of individuals with insurance that covered substance-use-disorder treatment.

Experts and lawmakers see the SUPPORT law as the step in the right direction in the opioid epidemic, which killed more Americans than cars and guns last years. The Whitehouse continues to investigate the role of opioid distributors and aims to release a study on potential misconduct within the next two weeks.