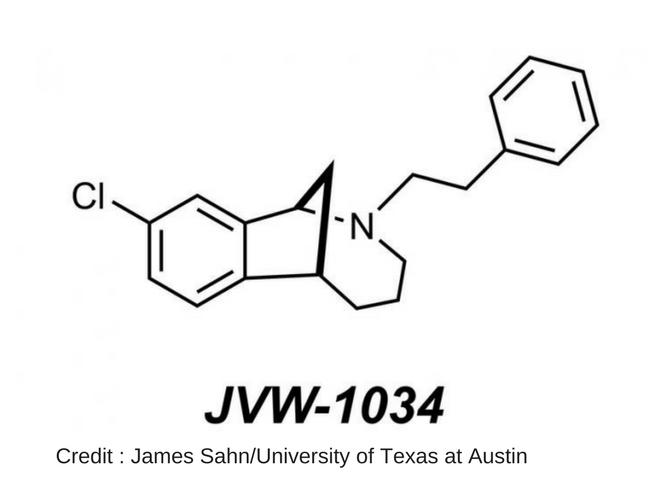 Scientists out of the University of Texas have released the findings from a new drug developed to combat alcoholism, with surprisingly positive results. The innovative drug simply called JVW-1034 invented by chemists’ James Sahn and Stephen Martin claim the compound could potentially ease withdrawal symptoms and block cravings.

Every year, more than 15 million American’s suffer from alcohol addiction.  There are an estimated 88,000 alcohol related deaths, and drunk driving accidents account for 31% of all driving fatalities. Alcohol misuse costs the United States $250 billion every year.

Current alcohol addiction drugs are found to be inefficient due to negative side effects and a weak success rate. JVW-1034 works differently than the alcohol addiction drugs found on the market presently. Medications like Vivitrol and Revia work by attaching to opioid receptors and blocking the release of dopamine by creating a barrier for 30 days at a time. Vivitrol medications are most effective when used after a medical detox to prevent unpleasant side effects during the beginning process.

“There’s clearly a huge need for something different and better,” said James Sahn, the co-first author of the study. “That’s where our approach shines. It’s modulating a pathway that doesn’t seem to be associated with any of the other drugs that are available.”

JVW-1034 works from a different angle, after Chemists Martin and Sahn had suspected their compound would interact with a cell receptor found throughout the central nervous systems of animals, called sigma. Previous research showed a connection to Sigma and cocaine addiction and it made them wonder if alcoholism might also be involved. Thus, began the testing process on lab worms and rats, which showed evidence of success.

University of Texas lab research colleague Luisa Scott started to test the compound on worms, first by giving them alcohol for an entire day, then taking it away. The worms became “hungover”, sluggishly moving to their tasty smelling alternative instead of their normal quicker pace.

However, after the JVW-1034 was administered to the hungover worms, they started to move at normal speeds and showed signs of recovery quickly after the dose.

The study was published in the journal Neuropsychopharmacology.

In follow-up experiments, Scott determined that the receptor sigma 2 was in fact responding to the dose of JVW-1034. This then proved for the first time that sigma 2 is involved in alcohol addiction. She noted that it can be difficult to identify which parts of an animal’s cells a drug interacts with. Some scientists in fact still don’t know the targets of many drugs that have been in use for many years.

“So for me, being able to show that this really is the target it binds to, that’s a big deal,” she said.

And finally, a group of collaborators led by Valentina Sabino tested JVW-1034 in alcoholic rats. Alcoholic rats that could freely access alcohol and were then given JVW-1034 dramatically reduced their alcohol consumption.

The researchers are in the process of developing several other promising drugs that target the sigma 2 receptor to treat other neurological disorders, including traumatic brain injury, neuropathic pain and Alzheimer’s disease.

JVW-1034 is now in the beginning stages of it journey to become fit for testing on humans in the near future.

Although there are many factors for alcoholism and pinpointing the exact treatment for such a widespread disease can be challenging, the JVW-1034 could be a step in the right direction for recovery from alcoholism.