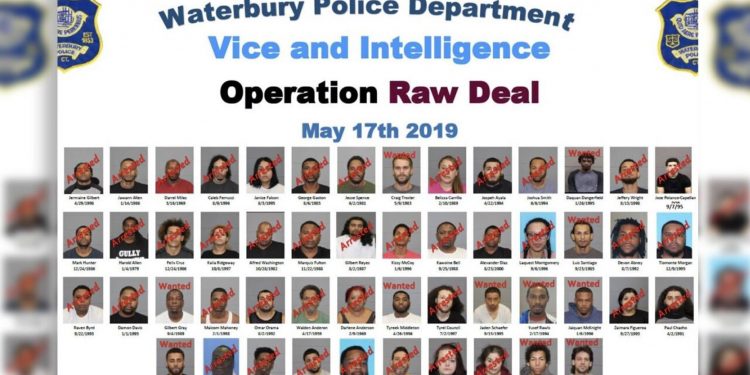 Over the last month, the State and Federal law enforcement arrested 50 people in connection with the massive undercover operation that resulted in the seizure of thousands of bags of heroin, guns and over $15,000 in cash. The arrest was made in Connecticut on Friday. However, authorities are still looking for a handful of others.

Authorities claim that the arrest was part of an investigation called, “Operation Raw Deal” that began in September” due to a spike in heroin overdoes related deaths in the city.”

The police then issued 92 warrants for the 52 suspects, with the following charges, the sale of narcotics, conspiracy at the disposal of drugs, firearm violations, and possession in a school zone. According to the police reports, 13 detectives fulfilled those warrants by conducting a series of raids across the small Connecticut town.

During their raids, the detectives seized 8 ounces of raw heroin, thousands of packaged bags ready to sell, and $15,000 in cash, two runner cars, and two handguns, with bullets and a loaded rifle.

They also noted that the majority of the people arrested in the monthlong sting were considered mid-level heroin dealers.

“You have the people that have a medical need and may need treatment, and then we have traffickers and suppliers. This kind of operation is targeting the trafficker side of the narcotics problem,” Lt. Silverio of the Waterbury Police Department stated during a Fox 61 interview.

“As of May 4, there’s been 24 deaths in Waterbury this year alone and 99 overdoses. This year, the numbers hopefully will get better, but we have a problem right here in this city,” added Lt. Silverio.

According to a nationwide study by the CDC, overdose deaths during the year, 2017 were four times higher than they were 1999. They also noted that heroin overdoses had remained stagnant, yet other forms of opioid use have spiked-causing an epidemic.

Other reports claim, 11 people may be on the run from the police, Waterbury Police cautioned the public if they recognize one of the suspects, do not approach them, and contact local authorities immediately.