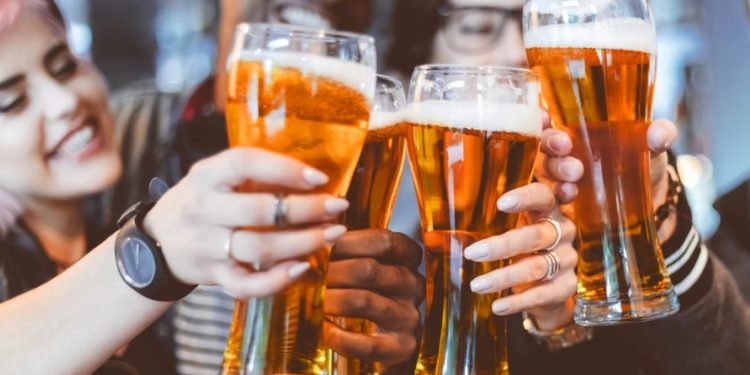 Instant effects
Only 30 seconds after the first sip, do people experience alcohol rushing to the brain. Alcohol in any form slows down the chemicals and pathways that usually are sent by brain cells to send messages. This effects moods slows reflexes and throws off people’s center of gravity. Many people can not think straight, and also seem to find recalling events difficult and struggle to store things in their long-term memory.

The Brain Shrinks
The brains of Longtime drinkers who have boozed heavily are significantly changed and affected. The brain cells start to change and shrink; consuming too much alcohol can make peoples brain noticeably smaller. This has significant effects on peoples ability to think, learn and retain information. It also makes it difficult to maintain steady body temperature and control body movement.

Does It Help People Sleep?
People may seem tired or lazy when they drink, finding it easier to doze off. However many do not experience a comfortable sleep. The human body processes alcohol throughout the night, and once it wears off, it leaves people tossing and turning. The body does not reach full REM sleep to feel fully rested. Studies show people may often experience nightmares and vivid dreams along with making numerous trip to use the restroom throughout the night.

Stomach Acid Overflow
The lining of the stomach is very irritated when filled with alcohol while making the digestive juices flow. The acid and alcohol build up are what gets many people nauseous and causes them to throw up. Many years of heavy drinking can create painful stomach sores called ulcers. Also, produce high levels of stomach juices meaning the user will not feel hungry, which leads the body to lose its nutrients.

Diarrhea and Heartburn
The intestine and colon are also damaged when filled with alcohol, and the process throws off the average speed of food that moves through them. Which is why hard drinking can lead to diarrhea, which can turn into a long term issue. Heartburn is also a huge side effect of too much alcohol; it relaxes the muscles that keeps acid out of the esophagus.

Don’t Break the Seal
The term “breaking the seal” refers to an urban myth that claims when drinking alcohol, urinating the first time will make it feel like the person needs to go every five minutes to the bathroom. This is true. The brain gives off a hormone that keeps the kidneys from making too much urine. When booze comes into play, it tells the brain to hold off, meaning the user will have to go more often, which can lead to dehydration. When someone has been drinking heavily for years, that extra workload and toxic side-effects of alcohol can wear the kidneys down.

The Steps to Liver Disease
Liver disease is a very real thing in alcoholics lives. Every time an alcoholic drink is consumed the liver breaks down, while still handling a lot of toxins. Heavy drinking over time can make the organ very fatty and less thick, fibrous tissue then builds up. This leads to limit blood flow, liver cells die, and the liver then gets scars before completely shutting down. Many people contract a disease known as cirrhosis.

Pancreas Damage and Diabetes
When working correctly, this organ is responsible for making insulin and other chemicals that help your intestines break down food. However alcohol clogs that process, the chemicals stay inside the pancreas, along with toxins from alcohol. Causing inflammation in the organ, and can lead to severe damage. Heavy drinkers will experience the lack of insulin production, which can lead to diabetes increases the chances of getting pancreatic cancer.

Hangover? Why?
The bright light, dry-mouth and spinning morning comes with no surprises. Booze makes people dehydrated which cause blood vessels in the body and brain to expand — giving people headaches. The stomach works to get rid of the body’s toxins and acids that are churned up by the alcohol, which leads to vomiting. The liver is also fighting to process alcohol, yet not being able to release enough sugar into the bloodstream, bringing on weakness and the “shakes.”

An Irregular Heart
After one night of binge drinking, it is enough to jumble the electrical signals that keep peoples heart’s rhythm steady. Although if someone is binge drinking for years, it can dramatically make those changes permanent. Additionally, alcohol can destroy the heart. Over many years, it causes heart muscles to sag and stretch; it can not pump blood as well, which will hurt the overall process of the body.

Hot and Cold
Many joke around when it comes to drinking, especially if someone is cold, many would suggest taking a shot of tequila. Well, they are right. Alcohol Widens the blood vessels, making more blood flow to the skin, this is what makes people blush and feel warm inside. However, that does not last for long. The heat from the extra blood then travels right out of the body, causing the body temperature to drop. Although, long-term drinking increases the blood temperature. Informing the body to release stress hormones that narrow the blood vessels, making the heart work twice as hard to distribute blood evenly

A Weaker Immune System
People might not think getting drunk comes with a cold; however, there is a connection. Alcohol puts the block on the immune system, not allowing the body to produce the number of white blood cells the body needs to fight germs. Twenty-four hours after drinking, people are more likely to get sick, in the long-run heavy consumers are at a higher risk to contract pneumonia and tuberculosis.

Hormone Terror
Hormones are what wire the human brain and manage everything from peoples sex drive to how fast they digest food. To keep the system running correctly, they need to be balanced, but alcohol derails them. For example, women can have irregular cycles and cause problems in getting pregnant. In men, it can cause lower sperm count, shrinking of the testicles and breast growth.

Turn Up The Music
Hearing is unknowingly affected by the consumption of Alcohol, yet no one is exactly sure why? Many believe that it messes with the part of the brain that process sound. Ever walk into a party and feel like the music is blaring?? Take a few shots, and it will just seem like background noise. It might also damage the nerves and tiny hairs in the inner ear that help people hear. Although it is a mystery, drinking usually leads to needing the sound louder so it could be herd. This scary fact can become permanent; long-term drinkers often have hearing loss.

Gumby Effect
Calcium in heavy drinkers is found to throw off average balance, along with hormone changes that alcohol triggers, keeping the body from building new bones. The skeleton becomes thinner and more fragile, a condition known as osteoporosis. Alcohol also slows down the blood flow to muscles and gets in the way of essential proteins that build them up. Over a period, drinkers will have lower muscle mass and less strength.

The effects of alcohol can vary among everyone; many factors control the impact making it difficult to understand the severity. However, the truth behind the liquid that makes the world go round is very real; many will ignore the simple signs that alcohol gives-but they shouldn’t.