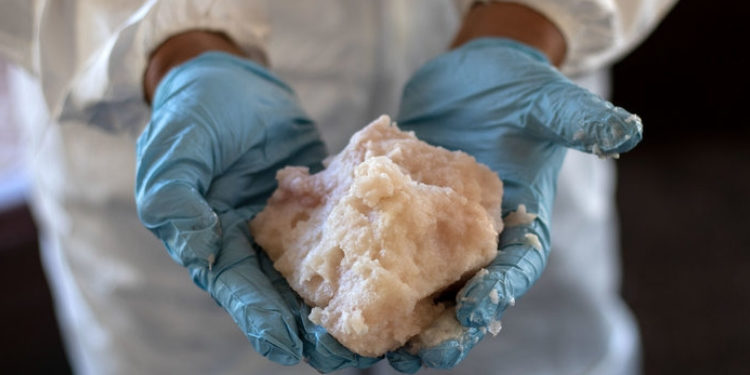 A drug specialist in the Mexican army shows crystal methamphetamine paste seized at a clandestine laboratory in Mexico's Baja California in August. Much of the meth sold in the U.S. today comes from Mexico, according to DEA officials.

America’s rise of opioid-related overdose and deaths have sparked a national crisis causing most to turn a blind eye to another growing drug problem: Methamphetamine use is rising across the United States in areas where it never was before.

According to Erik Smith, assistant special agent in charge of the Drug Enforcement Administration’s Kansas City office, “Usage of methamphetamine nationally is at an all-time high,” “It is back with a vengeance.” he says. “And the reasons for that are twofold.” The drug’s now stronger, and cheaper than it used to be.

A report done by NPR highlights the harsh realities of methamphetamine addiction or “meth”, the reports focus on a small rural town Qulin, southeastern Missouri as the drug started to become an issue in the early to mid-1980’s creating havoc among families three generations back.

Mexican drug cartels have captured the heart of producing high-quality quantities of the drug and pushing it into markets where it was previously unknown. At first, meth was known to be ‘cooked’ in a home or basement but since opioids have been the center of focus, manufacturers have made advancements. In rural communities destroyed by decades of experience with the drug, meth is on the uproar thanks to its low pricing, availability, and lack of treatment options.

In the article, it details the harsh reality that meth use began to show a decline at the beginning of this decade after lawmakers cut access to the main ingredients involved in the production of meth: pseudoephedrine sold over the counter at local pharmacies.

As this happened, people began turning to opiates as an alternative to get high, paving the way to the current crisis.

According to Sgt. Mark McClendon, of the Missouri Highway Patrol, details how meth is spreading to places and communities it never did before. Law enforcement agencies have been struggling with drug cartels pumping cheap, potent methamphetamine from “Mexican superlabs” through already established distribution networks for heroin and cocaine.

Like many other states, Missouri has been struggling to control the growing meth issue. It has a lot to do with how states prioritize opioid addiction treatment and medication over other drugs such as meth, making it especially challenging for those uninsured to obtain health. For example, unlike opioids, clinicians have no government-approved medications to treat methamphetamine addiction.

At the moment, the only available treatment options for meth is cognitive behavioral therapy. This approach helps the individual to spot situations, learn coping skills, and avoid situations in which will drive them to use, while also coming to terms with the root causes of their addiction in the first place. Other motivating incentives have been used to encourage patients to avoid meth such as vouchers or cash showing mixed results.

Currently, pharmacologic approaches are not available in the country, in contrast to those available for treating opioid addiction, but researchers insist “medication-assisted approach” is underway.

According to the article, the only response in southeast Missouri appears to be a group of new, faith-based meth support teams that have sprung up. Siebert a local from Qulin shares, “Because the problem is addiction, until they figure out why people want to get high and use drugs, it’s always going to be something else.”

Siebert says the decades of addiction experience that southeastern Missouri has with methamphetamine should serve as a warning to parts of the country. Addiction is not going away it’s just finding a new appearance to overtake