New Jersey Couple and Homeless Man Charged in GoFundMe Scam: ‘It Was All Planned’ 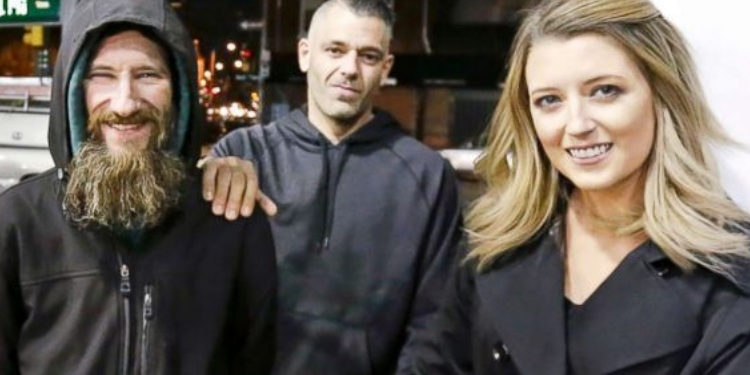 The GoFundMe Scandal has been quite a roller coaster with many different stories coming to the table. The New Jersey women involved claims she was “set up” by her now ex-boyfriend Mark D’Amico and the homeless man Johnny Bobbitt, who sued the couple earlier this year.

In a statement given to the New York Post through her lawyer Friday claims, “I was set up by Mr. D’Amico and Mr. Bobbitt,” who she is no longer seeing, “Mr. D’Amico knew that I was a very kind person and that I was a bit naive,” McClure added. “Mr. D’Amico took advantage of that.”

The story behind the couples viral GoFundMe post back in 2017 was that Bobbitt, who claimed to be homeless, gave his last $20 to McClure so she could get gas when she was stranded in Philadelphia last November. To show how grateful they were, the couple created a GoFundMe account to raise money for Bobbitt.  An outstanding 14,000 people donated to the cause, which brought it more than $400,000 profit overall.

So, what does a homeless man do with $400,000? That question began to surface about a year after in September 2018 with a lawsuit against McClure and D’Amico. Bobbitt complained the couple had mismanaged the money they had promised him, instead of spending the money to fund their own lavish lifestyle. He claims they instead of giving him an “allowance” , they deposited the funds into their own bank accounts and began spending right away.

Bobbitt’s attorney, Jacqueline Promislo said in a report from The New York Post, “They went on shopping sprees, [Bobbitt] tells me they had a Louis Vuitton bag and Chanel sunglasses, a new iPhone 10.”

The couple denied all allegations, stating they didn’t want to give Bobbitt them money because of his ongoing drug abuse. According to D’Amico, Bobbitt spent $25,000 in less than two weeks in December on street drugs in addition to paying overdue legal bills and sending money to his family. The couple’s attorney said they had given the homeless man about $200,000 already, while Bobbitt’s lawyer’s claim he only got $75,000.

During September McClure and D’Amico’s Florence, New Jersey home was being raided by police who claim to find a new BMW, jewelry, and money. However earlier this week, a New Jersey prosecutor -who began the investigation after Bobbitt insisted he wasn’t getting the right amount of money, said the fairytale story was a complete fake.

Scott Coffina, Burlington County prosecutor said, “The entire campaign was predicated on a lie, it was fictitious and illegal, and there are consequences.”. He also added, McClure never ran out of gas and Bobbitt never spotted her in distress and gave her money.

Officials said the three of them purposely hid information from the donors and denied any access to information, “that would affect their judgment about solicited contribution to that fundraising effort,” NBC 10 reported.

McClure and D’Amico and Bobbitt are now facing charges for concocting the fake story that led to a $400,000 gain.

The homeless man, 35, was arrested Wednesday night by the U.S. Marshalls in Philly and still remains in custody on probation detainers with a $50,000 bond. The couple surrendered to authorities that same night and were later released.

The Recover is an unbiased substance abuse and mental health news provider. Helping individuals looking for the right treatment programs in their area. Also providing information on New Jersey centers for addiction recovery