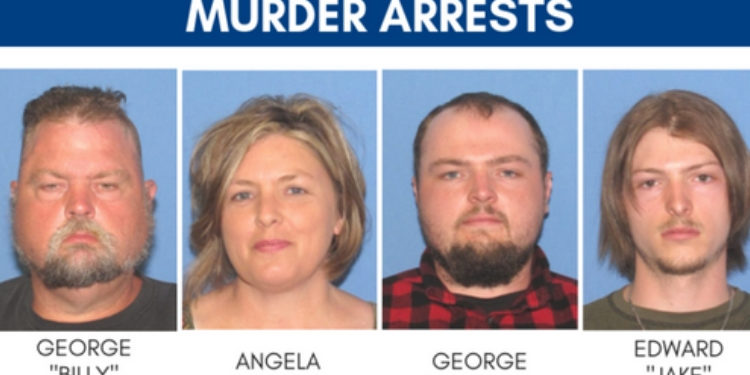 Eight years ago, Angela Wagner once told reporters that victim Hanna Rhoden was “like their daughter,” and whoever committed such a heinous crime of killing her and seven of her relatives on an Ohio marijuana farm were “monsters.” The story took a twisted turn, earlier this week, Wagner, her husband and their two sons were identified as people who carried out the execution-style killings in the quite small town of Piketon back in April 2016.

The four have been arrested on capital murder charges in the vase of Ohio Attorney General Mike DeWine described as the “most bizarre” case he has seen.

According to officials, the current motive seems to be a custody battle between the two families. The two families were very close. Angela Wagner,48, told the Cincinnati Enquirer last year that her husband, George Wagner, 47, was best friends with Christopher Rhoden Sr. , Hanna’s father.

According to investigators, the Wagners used their relationship with the Rhodens to plan the murders, carefully studying their every move, routines and layout of their homes. They shared information on sleeping patterns and locations and even “countersurveillance devices placed on their properties, including pets,” DeWine’s office said.

“It was meticulously planned. They knew what they were doing. They thought about it. A lot,” Attorney offices said.

On the night of April 22, 2016, Eight members of the Rhoden family were shot to death in four separate homes on their farm. The father was shot 9 times, Hanna Rhoden,19, had been shot in the head twice. Kylie her five-day-old baby was in bed with her, but unharmed.

Tuesday prosecutors said it was a custody fight over Hanna Rhoden’s other daughter that had ignited the Wagners’ gruesome plan. The custody battle was between Rhoden and her ex-boyfriend Edward “Jake” Wagner, 26.

Governor-elect, DeWine said the Wagners had an obsession on the custody fight, “There certainly was an obsession with custody, obsession with control of children,” he declined to explain any further. Jake Wagner and his mother had declined any custody battle in an email exchange between the Enquirer last year, wanting to clarify it was a “custody agreement.”

The agreement was that Sophia, then 2, in Jake’s custody on the night of the murders. She was supposed to be returned to her mom’s care that day.

After authorities executed warrants on the Wagners properties they emerged as suspects early next.

With all the news attention and accusations, the Wagners moved all the way to Alaska, asking the Enquirer to spare Sophia with questions about what happened to her mother, but the news followed. Eventually, the family returned to Ohio and were indicted by a grand jury on Monday.

Along with the murder charges, Angela Wagner, her husband, and Jake Wagner and his 27-year-old brother, George Wagner IV, were charged with forging custody documents.

The two parents were charged with lying to investigators about the case and according to officials the pair Fredericka Wagner,76, and Rita Newcomb, 65, were not involved with the killings.

Jake was also hit with another charge-unlawful sexual conduct with a minor. The reports said he and Hanna Rhoden has a relationship when he was 20 and she was 15. The officials said the Wagners don’t have anyone to represent them yet but have repeatedly denied any involvement with the slayings.

While searching the crime scenes police found more than 100 marijuana plants, which led authorities to believe the murders were drug-related. The reports led prosecutors to determine the drugs were unrelated to the case but would not elaborate.

The Recover is an unbiased substance abuse and mental health news provider. Helping individuals looking for the right treatment programs in their area. Also providing information on Ohio centers for addiction recovery