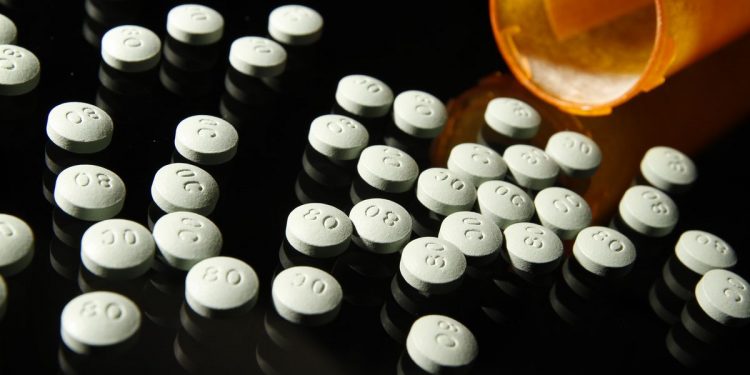 Almost twenty years later, circumstances have evolved considerably. The OxyContin of old is long gone. The little teal heroin pills that begged to be tampered with replaced by a new version with a difficult to defeat time-release mechanism that largely succeeds in preventing abuse. But Oxy’s legacy stubbornly persists. The millions of people originally drawn to the allure of OxyContin have moved on to cheaper, more potent heroin, and more recently, fentanyl and its powerful analogs. As with every cultural ritual, the American habit has been passed down through time and family, and a new generation is opiate-addicted that has never even seen a real OxyContin.

Some 72,000 people died by overdose in the United States in 2017, and the numbers continue to climb. Clandestine labs in China and Mexico produce fentanyl analogs that are up to a thousand times stronger than Oxycodone, prompting investigators to wear hazardous-material suits when the presence of fentanyl is suspected.

Purdue Pharma made out like a bandit, with sales from OxyContin at more than $30 billion dollars to date. They suffered relatively minor legal consequences, reaching a settlement in federal court in 2007. They admitted to misleading doctors, regulators, and the public, and three executives pleaded guilty to criminal misdemeanor misbranding, “with the intent to defraud or mislead” the public about the risk of addiction. The company was forced to pay about $600 million dollars, which included $34.5 million dollars in personal fines from among the three executives that pleaded guilty. This settlement seems trivial in comparison with both the amount of money Purdue generated from its sale of OxyContin, and the incalculable financial and human costs associated with has become an enduring addiction to opiates that began as a direct result of their actions. It’s also of note that this settlement provided for the protection of Purdue Pharma from future litigation concerning wrongdoing associated with OxyContin.

A recent Esquire article detailed the vast philanthropic aspirations of the Sackler family. Their name continues to adorn some of the most important and prestigious museums and universities in the world, even as it is now widely recognized that their company made billions selling what many consider to be the most dangerous product ever mass-produced in modern America. In a capitalist irony for the ages, Purdue Pharma won extension of its patent through their introduction of the new, abuse-proof OxyContin II, by claiming the old formulation they pioneered and relentlessly promoted was so prone to abuse that it shouldn’t be sold at all, by anyone, ever.

For the rest of us, things are decidedly without irony. Millions remain trapped in the nightmarish repetition of opiate addiction, and many more are doomed to follow down that dark path. Others are gone and buried, laid waste in their primes by a quiet killer without regard for age, race, education, or social standing. I am still here by whatever combination of luck and fate, determined to be one that survives the trials of addiction, having beat back the ghost of my own worst desires. I live and speak as a testament to those who could not, and in that way I am a voice for those who were silenced. As we continue to more fully comprehend the scope and costs of this new era of opiate addiction, we are also beginning to realize the limits of our current approach to drugs and addiction in this country. The last years have seen appreciable rises in research and funding, as the federal government has begun, albeit slowly, to invest in new, superior methods to address addiction other than the building of yet more prisons. Safer and more effective medications are currently available to treat opioid addiction, and their use is increasingly accepted as more people realize their life-saving potential. Many more, however, are left behind, in jail and without access to treatment of any kind. It is time for those of that have survived to look toward the future with strength and purpose of mission. There is much to be done as we move to repair outdated and ineffective national drug policies, and it is up to those of us for whom these broken policies matter most to fix them.