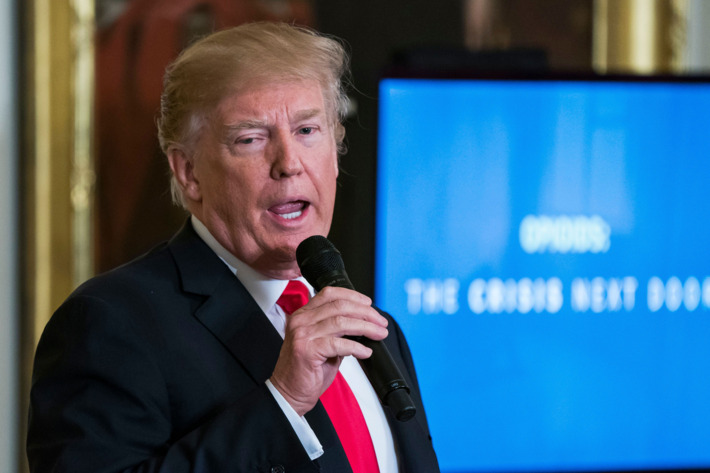 During yesterdays’s White House Summit on Opioids President Donald Trump made a severe statement by saying that the drug dealers of America should endure “the ultimate penalty” for their part in drug related deaths. Trump also supports the suing of pharmaceutical companies and opioid manufacturers in the local level, saying “I mean, what they’re doing and the way — the distribution.  And you have people that go to the hospital with a broken arm, and they come out and they’re addicted.  They’re addicted to painkillers, and they don’t even know what happened.  They go in for something minor, and they come out and they’re in serious shape.”

It’s been a little more than four months since Trump declared the nation in a state of a public health emergency due to the staggering numbers in the populations of addicts and overdoses that are stealing young lives from families all over the country. What he didn’t address in that declaration, was how to combat the problem. Nothing further was said, and some speculated he was only addressing the issue to calm nerves and quell naysayers.

Trump along with the rest of the White House have been trying to rally more of a positive movement to change the devastating direction of the epidemic by releasing a budget proposal that will fund the services and departments that will assist in combat the opioid crisis. In his proposal, the president allocated $3 billion in new funding for the 2018 year, and then $10 million in funding for the 2019 year, which will go to the Department of Health and Human Services.

During the summit he also addressed the interactions of drugs coming from foreign countries and was harsh with his suggestion of handing down the strongest penalties possible for drug traffickers.

“They kill hundreds and hundreds of people, and most of them don’t even go to jail. If you shoot one person, they give you life. They give you the death penalty,” Trump said. “These people can kill 2,000, 3,000 people and nothing happens to them. And we need strength with respect to the pushers and to the drug dealers. And if we don’t do that, you will never solve the problem.”

Attorney General Jeff Sessions was also in attendance at the summit, though both the President and the Attorney General did not directly interact, he was referenced in during the speech. He announced amid the heightened tensions with Sessions, he agreed with part of his approval for holding the pharmaceutical companies accountable.

“I’ve spoken with Jeff about bringing a lawsuit against some of these opioid companies,” Trump said.