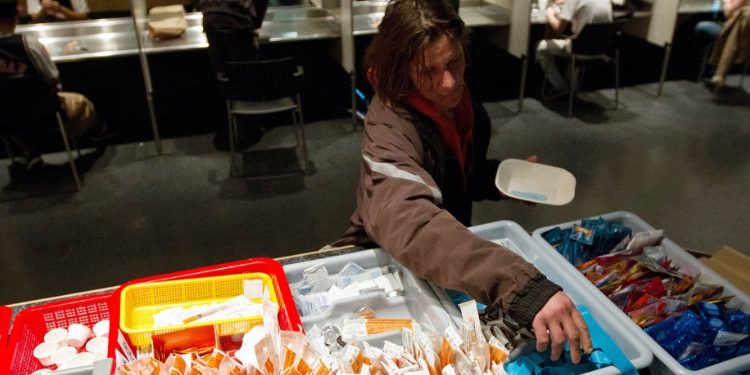 San Francisco’s dense areas are becoming overpopulated with what once seemed like a solution but now has infected the most populated and desirable neighborhoods. More and more addicts, many homeless are taking over the streets to find legal drug areas and clean needles.

Many San Fran politicians and activists have been aggressive with allowing “harm reduction,” which, means a “set of practical strategies and ideas aimed at reducing negative consequences associated with drug use,” for example an overdose or the transmission of disease. However, the new definition claims it is “a movement for social justice built on a belief in, and respect for, the rights of people who use drugs.”

The idea of harm reduction was initially a very controversial public-health measure, but now has become a religion among supporters and users, even as fears that the practice would glorify the use of drugs.

Organizations like San Francisco Drug Users Union demand “a safe environment where people can use & enjoy drugs” along with a “positive image of drug users to engender respect within our community and from outside our community.”

Many of the real advocates dominate the vote in City Hall, as well as a group of connected, politicized nonprofits that work together in the city with little accountability or oversight.

According to the Department of Public Health records, they have distributed approximately 4.45 million needles each year to the city’s 22,000 intravenous drug users, like heroin and prescription opioids although the use of methamphetamines and Fentanyl is on the rise.

Experts have supported the idea that sterile needles to reduce the transmission of blood-borne infection and injecting drugs under supervision can lower the risk of death and overdose.

Though many critics believe some clinics are now becoming inappropriate when it comes to promoting safety measures.

One nonprofit, known as the Crossroads, assembled and distributed “safe snorting kits” for at-risk and homeless youth. The kits came with baggies stuffed with straws, chopping mats, plastic razors blades, and instruction sheets. Many other groups have also offered crack-cocaine “safe-smoking” kits.

Many supporters have pushed to open a proposal which would allow numerous “safe injection” sites by the year 2020, yet opposed by Jerry Brown, is favored by Governor Gavin Newsom, and is likely to win.

As a result, an extraordinary number of addicts on San Francisco streets dangle on the edge of death, despite a continuous distribution of clean needles and a safe place to go.

The streets of San Francisco’s are littered with discarded syringes and homeless users openly injecting into their necks, toes, with the belief that it is acceptable.

Massive outcry from the public and many media reports showcase the true nature of the city’s streets, highlighting the hazardous medical waste on the streets and sidewalks. The city responded by teaming up with the San Francisco AIDS Foundation, which funded around $1 million per year, to hire a cleanup crew. Since then 60 percent of the used needles are collected and destroyed.

In the Meantime, the quality of life in the city continues to erode, while the use of drugs continues to grow.