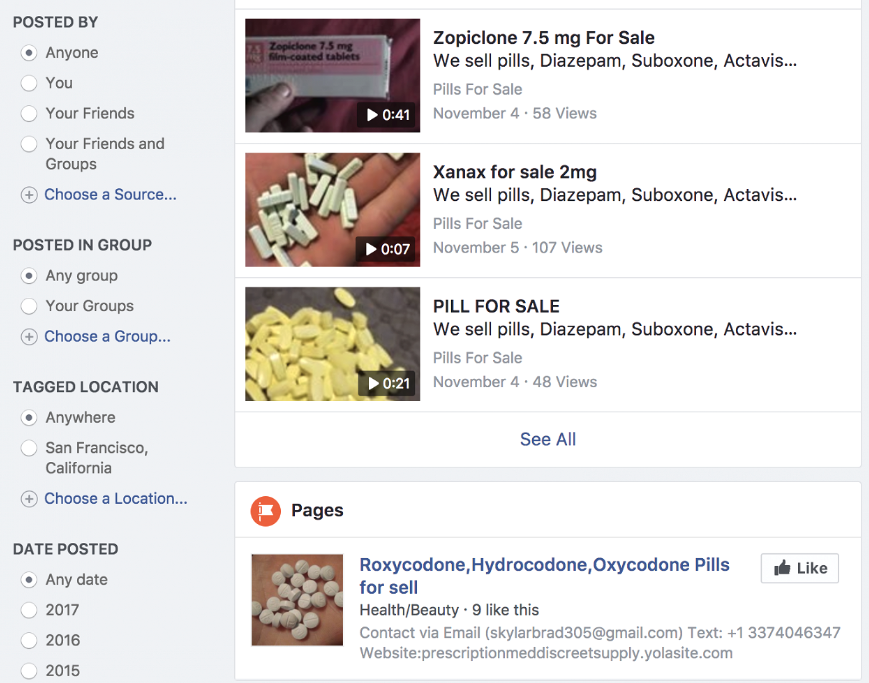 Back in November 2017, Facebook came under fire for the unregulated availability to purchase prescription opioids on the social media site, just three weeks after President Trump declared the opioid crisis a Public Health Emergency. 6 months later creator Mark Zuckerberg would have to answer for site’s lack of oversight to Congress.

During this week’s 10-hour grilling session that spanned over two days, Congress expressed not only concern about the privacy issues that were breached by the data firm Cambridge Analytica, but the unregulated sales of prescription opioids on Facebook’s growingly popular Marketplace portion of the site. Last Fall when first reached for comment about the illegal sales, the company told CNBC:

“Anyone can report content to us if they think it violates our standards. People can flag Pages, profiles, individual content, and/or comments to us for review.

Upon receiving these reports, our Community Operations team, which is global and reviews content 24/7 in over 40 different languages, reviews reports against our Community Standards to determine if they violate. We remove violating content as soon as we become aware of it.

In this case, a number of the Pages that turn up based on the search terms you provided were in violation of our policies. They have been removed from the platform.”

Which left lawmakers shocked at the lack of oversight from the multi-billion-dollar company. Essentially, Facebook was suggesting that it relies on users to report the postings, rather than Facebook devoting employees to specifically police the site with the single task in mind.

It’s not hard to find these prescriptions on the social media site, simply searching in the marketplace with the various names of opioids following with “for sale” will populate illegal prescription sales within miles of the user. On November 13, 2017 CNBC searched Facebook for “Roxycodone, Hydrocodone, oxycodone pills for sale” and screen shots of the results showed ads that had been up since September that same year.

Later during an Earning’s call, Facebook said it would hire up to 20,000 people for “safety and security”, including oversight for fake news and other restricted content.

At the most recent Congress hearing, Zuckerberg sat wide eyed and awkward while accounting for his company’s failings, repeatedly apologizing for the lack of oversight on the massive platform and answering questions with non-responses and vague details of future intentions of restructuring of the site.

Rep. David McKinley, a Republican representing West Virginia, was one of those members of Congress who pressed Zuckerberg on why Facebook hasn’t done more to remove posts from sellers offering illicit opioids.

“Your platform is still being used to circumvent the law and allow people to buy highly addictive drugs without a prescription. With all due respect, Facebook is actually enabling an illegal activity and in so doing, you are hurting people. You’d agree with that statement?” he asked.

Zuckerbergs response was a weak indirect answer to McKinley’s question, by acknowledging how his company needs to build more artificial intelligence tools. Again, mentioning that the company predominantly depend on its security and content reviewers to take down posts that are flagged by users. He repeated his plans to hire 20,000 more employees to fill those roles by the end of the 2018.

Annoyed members also brought up the opioid crisis, an epidemic that plagues many of their districts. “Don’t wait for someone to flag it. Look for it!” urged Kevin Cramer of North Dakota.

Rep. Buddy Carter, R-Ga. questioned Zuckerberg and educated him on the crisis that most of the US population deals with every day

ZUCKERBERG: “I did not know that specifically.”

CARTER: “Did you know that it’s estimated to be between 2.5 to 11.5 million people in this country right now who are addicted to opioids?”

CARTER: “Absolutely. I ask you this because some of the other members have mentioned about the ads for fentanyl and other illicit drugs that are on the internet and where you can buy them and your responsibility to monitor that and make sure that not happening.

I had the opportunity this past week to speak at the Prescription Drug Abuse and Heroin Summit in Atlanta that Rep. Hal Rogers started some years ago. Also, we had the FDA commissioner there and he mentioned the fact that he’s gonna be meeting with CEO of internet companies to discuss this problem.

I hope that you will be willing to at least have someone there to meet with him so that we can get your help in this. This is extremely important.”

ZUCKERBERG: “Congressman I will make sure that someone is there. This is an important issue.”

But Congress felt unconvinced, siting previous discrepancies and leading member Frank Pallone called for regulation. “It’s time to pass comprehensive legislation to prevent incidents like this in the future,” he said. “If all we do is have a hearing then nothing happens, that’s not accomplishing anything.”

“We didn’t take a broad enough view of our responsibility, and that was a big mistake. It was my mistake, and I’m sorry. I started Facebook, I run it, and I’m responsible for what happens here.” Zuckerberg apologized, while he took responsibility for something he never saw happening when he created the massively popular site.

Zuckerberg has been flexing the apologies playbook since 2010, when Facebook was challenged by the Federal Trade Commission over privacy standards, and the most recent Cambridge Analytica scandal has shown just how little has changed within Facebook since then.