Alcohol-Related Deaths Spiked During the Pandemic, a Study Shows 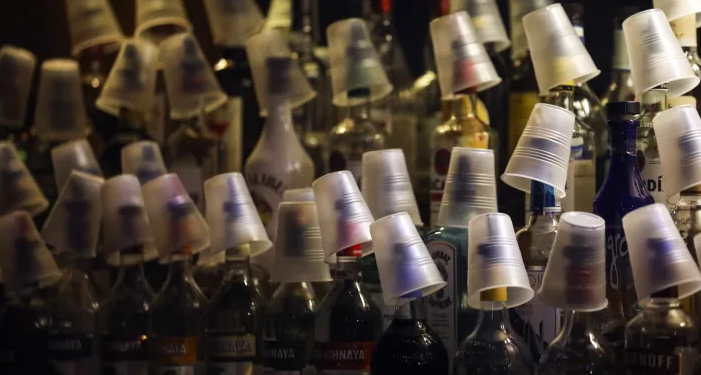 A new report finds that the number of alcohol-related deaths from causes like liver disease and accidents was up 25 percent in 2020 over the previous year. (Eve Edelheit/The New York Times)
Roni Caryn Rabin
Tue, March 22, 2022, 4:36 AM·5 min read

Almost 1 million people in the United States have died of COVID-19 in the past two years, but the full impact of the pandemic’s collateral damage is still being tallied. Now a new study reports that the number of Americans who died of alcohol-related causes increased precipitously during the first year of the pandemic, as routines were disrupted, support networks frayed and treatment was delayed.

The startling report comes amid a growing realization that COVID-19’s toll extends beyond the number of lives claimed directly by the disease to the excess deaths caused by illnesses left untreated and a surge in drug overdoses, as well as to social costs such as educational setbacks and the loss of parents and caregivers.

Numerous reports have suggested that Americans drank more to cope with the stress of the pandemic. Binge drinking increased, as did emergency room visits for alcohol withdrawal. But the new report found that the number of alcohol-related deaths, including from liver disease and accidents, soared, rising to 99,017 in 2020 from 78,927 in 2019 — an increase of 25% in the number of deaths in one year.

That compares with an average annual increase of 3.6% in alcohol-related deaths between 1999 and 2019. Deaths started inching up in recent years, but increased only 5% between 2018 and 2019.

The study, done by researchers with the National Institute on Alcohol Abuse and Alcoholism, a division of the National Institutes of Health, was published in The Journal of the American Medical Association on Friday. Using information from death certificates, the researchers included all deaths in which alcohol was listed as an underlying or contributing cause. (Only a very small number also involved COVID-19.)

“The assumption is that there were lots of people who were in recovery and had reduced access to support that spring and relapsed,” said Aaron White, the report’s first author and a senior scientific adviser at the alcohol abuse institute.

“Stress is the primary factor in relapse, and there is no question there was a big increase in self-reported stress, and big increases in anxiety and depression, and planetwide uncertainty about what was coming next,” he said. “That’s a lot of pressure on people who are trying to maintain recovery.”

The alcohol-related deaths went up for everybody — men, women, as well as every ethnic and racial group. Deaths among men and women increased at about the same rate, but the absolute number of deaths among men was much higher.

Drug-overdose deaths also reached record levels during the first year of the pandemic, with more than 100,000 Americans dying of overdoses during the 12-month period that ended in April, a nearly 30% increase over the previous year, according to reports issued in November. The number of deaths from opioids in which alcohol played a role also increased.

Adults ages 25-44 experienced the greatest increases in alcohol-related deaths in 2020, rising nearly 40% over the previous year, according to the new report.

Available data for 2021 indicates that alcohol-related deaths remained elevated, White said, but he added that it was hard to say whether that indicated a continuation of the trend because alcohol consumption and deaths generally drop in February after the holidays and then trend back up.

“Maybe they’ll go back down,” he said, “but this could be the new norm.”

The crisis has actually been brewing for years, as drinking among adults has been increasing even as drinking among adolescents has fallen off, said Katherine Keyes, a professor of epidemiology at Columbia University, who was not involved in the study. Mental health struggles were also becoming more prevalent before the pandemic, making people more susceptible to substance abuse.

“As with many pandemic-related outcomes, this is an exacerbation of issues that were beginning before the pandemic for many people,” Keyes said. “Drinking has been going up for 10 or 15 years among adults, and the trend accelerated in 2020, as some of the motivations to drink changed: Stress-related drinking increased, and drinking due to boredom increased.”

Adults in their mid-20s to mid-40s with children at home were under increased stress as they juggled remote working and learning, she said; those without children, who generally drink more anyway, may have been contending with more isolation and loneliness.

And when people drink at home, she noted, there is no bartender monitoring the size of the drink — “you have less ability to regulate how much is going into the glass,” she said — and drinking is much less expensive.

But it was the inability or reluctance to access treatment during lockdowns and periods when the health care system was overwhelmed that may have deterred those who needed treatment from getting care, said John Kelly, a professor of psychiatry at Harvard Medical School and the director of the Recovery Research Institute at Massachusetts General Hospital.

That may have contributed to deaths from alcohol-related liver disease, which accounts for about one-third of alcohol-related deaths, Kelly said. Other major causes are drug poisoning, which occurs when alcohol is involved in a drug overdose death, and alcohol-related mental and behavioral disorders.

Total alcohol sales in the United States by volume increased by 2.9% in 2020 over the previous year, the greatest annual increase in sales since 1968, White said.

He called for new approaches to addiction that teach people to cope with stress in a more productive manner.

“We are entering an era in public health where we are talking more about promoting wellness and building resilient people,” he said. “What we are doing now is not sufficient. We need to help people live meaningful purpose-filled lives.”

An excess of empathy can be bad for your mental health