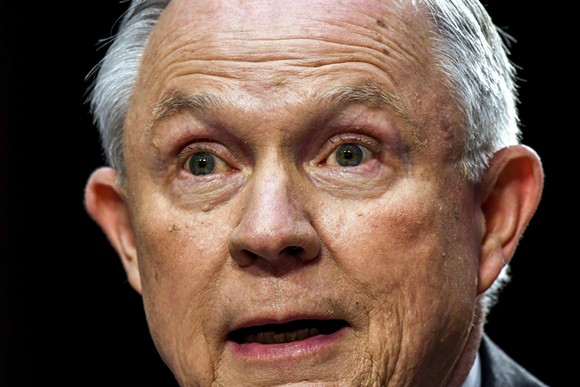 Days after the three-part plan proposed by President Trump, Attorney General Jeff Sessions discusses the guidance for federal prosecutors to use when arraigning drug dealers for their crimes. “We will not hesitate to pursue maximum sentences allowed by law, and if appropriate, the death penalty. Our message should be clear. Business as usual is over,” said Sessions, a former U.S. senator from Alabama, during the short 30-minute speech inside the federal courthouse on Thursday. “Plain and simple, drug traffickers show no respect for human dignity. They put their greed ahead of the safety and even the lives of others, knowing people will be dying as a result of their products.”

In the memo sent to U.S attorneys Wednesday morning, Sessions related that “appropriate cases” in which one would charge the accused with the death penalty include murders related to racketeering crimes, murders related to a criminal enterprise or gun deaths during drug trafficking crimes.

This means the drug dealers who could face the death penalty must be directly involved with murderous crimes due to the selling, transporting and cultivation of mass amounts of illicit drugs.

In addition to describing the statues in which an accused would be charged with the death penalty, Sessions also proposed appointing an opioid coordinator in every US district and broadening the use of data analysis tools collected from the Opioid Fraud and Abuse Detection Unit.

“I strongly encourage federal prosecutors to use these statutes, when appropriate, to aid in our continuing fight against drug trafficking and the destruction it causes in our nation,” Sessions said in the letter.

Since declaring the opioid crisis a national emergency, the Trump administration has repeatedly addressed the fact that in 2016, 64,000 lives were taken due to opioid related deaths.

President Trump has been outspoken about the new nationwide enforcement, “We can have all the blue-ribbon committees we want, but if we don’t get tough on drug dealers we’re wasting our time. And that toughness includes the death penalty,” Trump said in a speech in New Hampshire.

This new proposal will only broaden the statutes allowing prosecutors to pursue the death penalty that have already been embedded in U.S. law. But the 1994 clause permitting the execution of certain drug traffickers, even those who have been involved in drug-related murders, has never been used before, the Washington Post reported on Tuesday.

Nonetheless, Sessions told in a previous statement that the Justice Department operating under the Trump administration will “continue to aggressively prosecute drug traffickers and we will use federal law to seek the death penalty wherever appropriate.”

You can read the Memo from Sessions here.

“The opioid epidemic has inflicted an unprecedented toll of addiction, suffering, and death on communities throughout our nation. Drug overdoses, including overdoses caused by the lethal substance fentanyl and its analogues, killed more than 64,000 Americans in 2016 and now rank as the leading cause of death for Americans under 50. In the face of all of this death, we cannot continue with business as usual.

Drug traffickers, transnational criminal organizations, and violent street gangs all contribute substantially to this scourge. To combat this deadly epidemic, federal prosecutors must consider every lawful tool at their disposal. This includes designating an opioid coordinator in every district, fully utilizing the data analysis of the Opioid Fraud and Abuse Detection Unit, as well as using criminal and civil remedies available under federal law to hold opioid manufacturers and distributors accountable for unlawful practices.

In addition, this should also include the pursuit of capital punishment in appropriate cases. Congress has passed several statutes that provide the Department with the ability to seek capital punishment for certain drug-related crimes. Among these are statutes that punish certain racketeering activities (18 U.S.C. § 1959); the use of a firearm resulting in death during a drug trafficking crime (18 U.S.C. § 924(j)); murder in furtherance of a continuing criminal enterprise (21 U.S.C. § 848(e)); and dealing in extremely large quantities of drugs (18 U.S.C. § 3591(b)(1)). I strongly encourage federal prosecutors to use these statutes, when appropriate, to aid in our continuing fight against drug trafficking and the destruction it causes in our nation.”