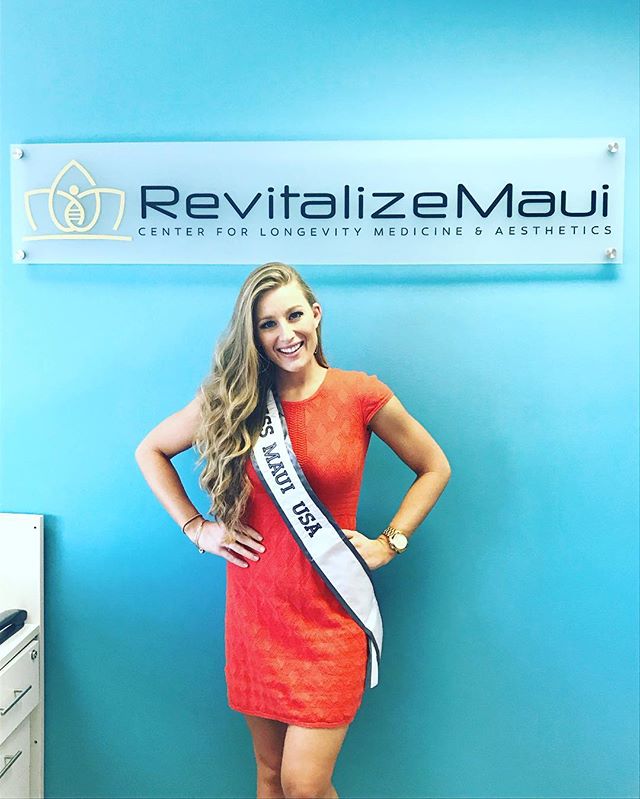 Kula Island’s Kailey Parker back injury left her barely able to walk. A year later she was addicted to the prescribed pain medications she was given to manage her pain. A year after that, her mother had died.

“My world shattered” She said,

The now 25 year old has overcome her trials and planned to share her story at the Miss Hawaii USA Pageant. Kailey was one of the hand picked girls who were chosen to represent Maui at the formerly owned by President Donald Trump.

“It feels amazing. I’m absolutely honored,” Parker said. “I feel like I’ve been working hard, and I’m determined. I’ve done some heavy preparations in order to be prepared for this weekend. I honestly feel from the bottom of my heart I will take home the title.”

Kailey Parker was born and raised on Maui island, and move to Washington State with her family for high school. After high school she worked as a cheerleader for a local professional indoor football team, when she fell 7 feet from a railing and landed hard on her tailbone during a game.

When Parker blew two disks in her back in a fall, she felt excruciating pain every time she walked. She was prescribed “heavy narcotics” to manage her pain, but over the course of a year realized she was becoming mentally and physically addicted to the meds.

“I was the normal hardworking girl who had to wean myself off of medication,” she said. “That was horrible. It’s lethal stuff.”

After undergoing two back surgeries, she continued to work to help her mom. She said her doctors advised her to continue taking medications, but she decided to stop “Cold Turkey”

“It changed who I was as a person,” she said. “I’m usually a very happy outgoing person, but when you saw me I was intoxicated by the medicine. I was closed off. I was shut down.

“It doesn’t just numb physical pain; it numbs you entirely. You’re no longer you.”

For the next 40 days Parker experienced intense physical withdrawal symptoms, saying she always felt on edge, shakey and like she was literally dying.

“It’s like having the flu for 40 days,” she said. “Sometimes you can’t get up to go to the bathroom . . . It’s physically gut-wrenching pain.”

While Kailey was separating herself from body from the prescriptions, her grandfather passed away. A week later, her mother did too. She had just graduated from college and had no support on the mainland. She and her 12 year old brother moved back to the island.

“She was my best friend,” she said of her mother. “She was my absolute support system. I lost everything.”

The healing started when she returned to Maui and began focusing on her health. Right now she works as a visual merchandising coordinator for Tommy Bahama, but tries to be vocal with her story at schools and the youth.

Parker recently spoke to students at Lahaina Intermediate School and recalled asking them if they had seen different forms of drugs.

“Almost every student raised their hands. It’s baffling,” she said. “Students were crying — it’s very sad, and I think it needs to be talked about.”

Parker is aware that drug addiction is not a popular or easy topic to discuss, especially in the in the Pageanting world. She was not completely sure about sharing her story, but when she spoke about her experience with the Miss Maui USA Judges, “A weight lifted off my shoulders”

“I know it’s not the pageant thing to talk about, but we’re in 2017 and we need to talk about the real issues that are affecting the next generation,” she said. “With this title, it gives me the platform to share my story and help prevent anyone else from going through the issue or get in the same spot that I did.”

Parker hopes that Trump, who declared the opioid epidemic a “national health emergency” in October, produces a policy against pain medication. She says doctors need to be held accountable for misuse of medication.

“I know there’s doctors on Maui who give them out randomly, and I’ve talked to the Police Department about it,” she said. “It’s got to crack down everywhere because there’s a lot of people using it.”

Parker says she is a stronger person today because of her mother and her fight with opioid abuse. She feels confidently of her chances to represent Hawaii in the Miss USA contest, and hopes to be the first Maui Country resident to win in the 65 year old national competition.

Holiday Grief - How To Deal With The Holidays

Holiday Grief - How To Deal With The Holidays