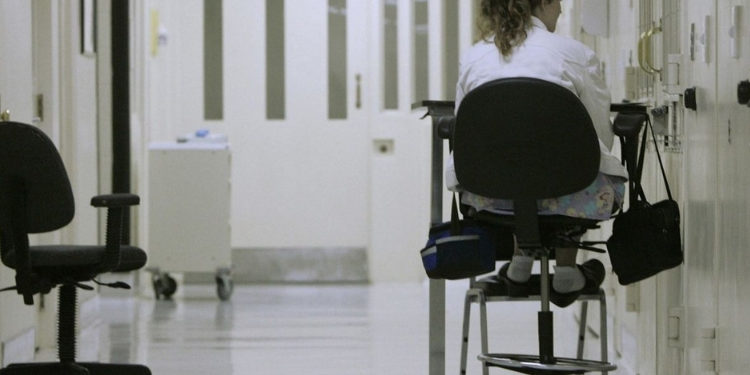 A woman who sat in a Chino prison cell according to reports had screaming tantrums every 15 minutes for four hours before she fell to the floor and ripped her own eye out. In the chaos, guards rushed over with guns in hand but it was too late to save her, she had already swallowed it.

The inmate who was only identified as Patient X in federal court had not been given the proper medical attention she was supposed to receive, despite her screaming efforts. The court documents listed the patient as “psychotic” while she was held at the California Institution for Women in Chino in 2017,  but was still not given the proper attention and medication for her condition.

Dr. Michael Golding, chief psychiatrist for the prison system released a report addressing the horrible and graphic incident. The report was made public this week to highlight how the state of California rehab centers have failed to care and properly assist its most vulnerable inmates. During his 161-page document that the California Department of Corrections and Rehabilitation has hidden issues such as these surrounding mental health care and staffing in prisons from the officials who could make these simple changes.

According to a statement from Golding, “This group has created a biased and inaccurately positive picture of what is actually a troubled system of care.” The reports are based on his many visits to various state prisons, which was filed in federal court as a lawsuit against the state that has continued for three decades and argues that psychiatric care in state prisons is a constitutional right.

During a federal case against the state prison system in 1995, the court concluded that the many prisons he visited it was clear that they had failed to provide proper treatment or medication for thousands of mentally ill inmates. The judge of the case orders the appointment of a “special master” to oversee psychiatric care reforms and to develop a system to improve mental health care.

Michael Bien an attorney defending the inmates says, “The bigger impact is we felt we were ticking off the last couple of issues before we could end the case, now I have to go back and check all those assumptions. The most serious thing is the allegation that misrepresentations were made to the court. That really forces all of us to question what’s been going on.”

One of the main problems Golding witnessed in his visits and mentioned in his reports is that patients frequently aren’t being seen by doctors on time or in the spaces that give them the privacy to talk openly about their mental health. The date provided to the court in 2017 and 2018 alleges that the state Department of Corrections mischaracterized how often inmates are seen by the psychiatrist, reports read that 90% and 94% of appointments in those years were on time, although according to Golding less than 50% of the inmates were seen on time by the staff. The system, he wrote, is “by no means conducive to good patient care.”

According to a study released by Stanford Law School in 2017 states that even as the overall inmate population, the prevalence and severity of mental illness among those in the state prison system is on the rise. The study reported more than 30% of California inmates currently receive treatment for serious mental disorders, an increase of 150% since 2000, according to the study.

Many disagree with Golding’s findings, including Vicky Waters, press secretary for the California Department of Corrections and Rehabilitation, who rejected the statements made by Golding in a press statement on Friday.

“The department strongly disagrees with this individual’s allegations and looks forward to a fair and thorough review and hearing of all the facts,” she said. “We have worked closely with lawyers representing prisoners, as well as the court appointment monitors, for many years to improve the mental health of inmates, and our dedicated and well-trained staff will continue to provide appropriate care and treatment.”

Another growing problem that Golding witnessed is the medical decisions which involved drugs the inmates need and the amount and care certain individuals should have been receiving.

As for the case of the women who ripped her eye out and then proceed to swallow it, the assigned psychologist who evaluated her did not make the decision to administer her drugs, despite the doctors saying the patient had given every signal and warning that she needed medication even if they had to hold her down and force it to her. Later the nurses and psychologist said the neglect to administer medication was not the root cause of the incident and that the investigation is still ongoing.

Golding released a statement from his report stating, “The tragedy is that any competent psychiatric physician or general medical physician would have medicated the patient, and likely the patient’s eye would still be in her head had that happened.”