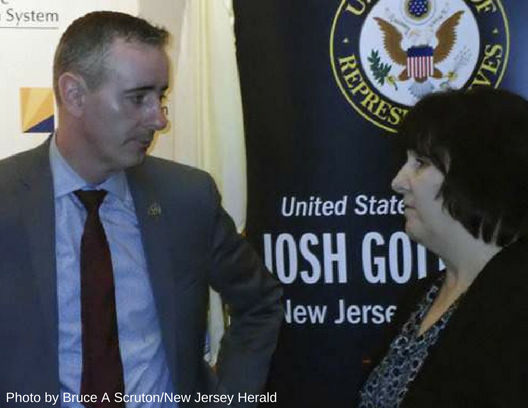 U.S. Rep. Brian Fitzpatrick, R-Pa., left, talks with Becky Carlson of the Center for Prevention and Counseling during a roundtable discussion on the opioid issue on Friday at Newton Medical Center.

States overwhelmed with patients looking for the promises of the new anti-opioid measures orchestrated by the presidential administration are still struggling to reap the benefits of the programs goals. The walking wounded say while the help is supposed to be out there, it’s affordability is out of reach. Even U.S House Representatives agree the biggest need is funding.

Members of the Problems Solvers Caucus in the house is made up of 24 Democrats and 24 Republicans, including group sponsor Democratic Rep. Josh Gottheimer, who represents New Jersey’s 5th District and who brought along Brian Fitzpatrick, the Republican congressman from Pennsylvania’s 8th District.

The two men have been friends longer than they have held office, yet both represent two very different districts. Fitzpatrick’s district covers the wealthy Buck’s County, while Gottheimer resides over the lower income Sussex County.

“There’s nothing partisan at all (about the drug problem). It’s in every state in the country, every walk of life,” Gottheimer said.

The CLEAR group is a recovery program celebrating it’s third year in operation this summer founded by Becky Carlson. It established a drug court program, working with the Newton Police Chief Michael Richards and the Center for Prevention and Counseling in getting the program off the ground.

“It is one way we have of fighting back,” said Sussex County Freeholder Sylvia Petillo, who got involved with the program when it began and she was mayor of Hopatcong.

Since it’s creation, every police department in Sussex County now has the drug Narcan, which can counteract the effects of an overdose, but each dose of the drug costs about $100 and there is little funding for supplies.

First Assistant Prosecutor Gregory Mueller said the county’s drug court, one segment of the CLEAR program, has “made it very clear this rehabilitation model is working.”

But the commitment from the national level is called into question now, as Fentanyl floods our borders after being smuggled into the states from China. It’s hard to see who’s taking full responsibility for the initiative proposed in March by President Trump. Will each state be in charge of fixing their communities or will the Federal government step into each state individually? A $3 Billion dollar budget was proffered to bankroll the nation’s crisis, but the costs are mounting and states are waiting for reimbursements.

As to payment, Dr. Mike Ganon, who works with CLEAR, said, “Virtually all of my patients are covered by Medicaid, and I get paid as if it were a sinus condition.”

He noted there is a need for a professional social worker in his office, but “I could not keep the lights on if I relied on what we’re paid (by Medicaid).”

Licensing is a major issue to get a professional social worker into the places where the addicted are affected most. Licensed Practitioners can’t get into places like jails or prisons because the establishment needs to hold the license for the worker to even see the prisoners and most don’t hold that license for that to happen.

And with a captive audience like the jail and prison systems, where prisoners would benefit the most from counseling and interventions are unable to get the help they so desperately need. Prisoners are 12 more times likely to suffer from an overdose than the general population, often within two weeks of release.

“There’s just not enough places to send them or enough funding to help them,” Petillo said.