by Jason M
in Featured
4 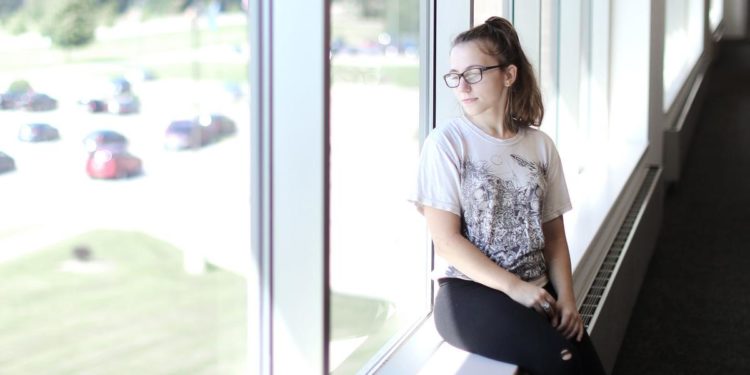 Reddy had criticized Hailey’s attitude, tone and body language. She was in trouble for missing treatment meetings and breaking the no-guest rule at the treatment court’s housing facility.

During a break, officials called the thrift store where Hailey said she had set up community service hours. The store had not heard from her.

“Who do you think I should believe?” Reddy asked.

And so Hailey was going to jail.

As she waited for other drug court participants to get their turn, a deputy told her to surrender her phone. After she didn’t immediately comply, Reddy stopped and ordered her to hand it over.

“I don’t want to see her again,” Reddy said as he asked the deputy to take Hailey to the bullpen, where jail inmates wait between court hearings.

Minutes later, the courtroom heard screaming, muffled only by the thick walls. Hailey later called the incident a “meltdown.”

Hailey is now 19, and she said she started using drugs at 13. But there is more to her story: Her teenage years caused scars, both physical and emotional.

The day of Hailey’s meltdown, another drug court participant graduated from the program. After the ceremony, Behl said attitude is what usually separates graduates from those who are terminated.

This is Hailey’s dilemma: Her difficult childhood and the drug addiction she is trying to recover from might have robbed her of what experts call an essential tool in that very recovery.

Glasses, drugs and a blizzard

Before Hailey was a daily heroin user, she was an elementary school girl with glasses.

She was picked on a lot, she said. The repeated bullying about her looks made her afraid to go to school.

At 11, Hailey said she was diagnosed with anxiety and depression.

“It sucked for a while,” she said in an interview.

Her heart would race over a test. But at 13, Hailey said she found something that calmed her down.

A boy Hailey was dating wanted to try smoking marijuana.

“At first I was like, ‘No, drugs are bad,’” she said, but eventually she agreed.

The two smoked after an Elkhorn Middle School dance in an outdoor dugout during what felt like a blizzard, she said.

After that, she became a regular user. She remembers her siblings smoking weed growing up, too—although she didn’t recognize the signs at the time.

Nearly 43 percent of treatment court participants in Walworth County reported first using drugs when they were younger than 16, Behl said. The mode—the most common age of first use—was 14.

Her arms still show the scars from when she would self-harm.

One day, Hailey was an eighth-grader sitting in front of her mirror. There were tears in her eyes. She had just downed a bunch of pills in an attempt to end her life, she said.

She doesn’t remember much else. She said she woke up in a hospital room, “where everything was soft.”

She lived with her mom growing up. Her dad was not around.

On her 16th birthday, her mom handed her the keys to a red 1998 Celica, “the cutest little car,” Hailey said. She wanted to take the car and go see her dad. But, as Hailey recalls, she showed up at his door, and he completely forgot it was her birthday.

“I just always wanted my dad in my life,” she said.

The drug use in high school expanded beyond marijuana. Hailey said she tried cocaine and acid. Then a boyfriend handed her a powder and told her to snort it. He told her it was heroin.

A fear of needles did not stop Hailey from eventually getting hooked on injected heroin, she said.

Hailey dropped out of high school during her senior year because she was pregnant, and she was starting to show, she said. The questions and the embarrassment were too much for her.

“I regret so much dropping out because I was so close to graduating,” she said.

A vital element of treatment is opening up to the root causes of addiction, Behl said.

“We can work with that if they let that wall down,” she said. “But if they don’t, they’re just gonna continue to go through the program, and it’s not gonna be easy—for us or them.”

After dropping out, Hailey had run-ins with the police.

The interactions varied, according to Whitewater police reports obtained by The Gazette.

An officer reported after stopping Hailey in May 2017 for operating after suspension. She “had a good attitude” and said she didn’t know her license was suspended.

In August 2017, she received a citation for underage drinking. The officer in the report said Hailey lied but later admitted to drinking three or four beers. She reportedly had slurred speech and could not stand without swaying, and a preliminary breath test showed her blood-alcohol concentration was 0.124.

On July 29, 2017, Hailey was a passenger in a silver BMW. An officer recognized Hailey and said she looked “abnormally pale,” according to the report.

Hailey said she was detoxifying from heroin, so she didn’t go out in the sun much, according to the report. She had recently given birth to her son, Aizen, and was being drug screened.

Although she originally said she hadn’t used heroin in a month, an officer reported she had “syringe-type track marks” on her right arm. Later at the police department, Hailey said she had used heroin the night before, was feeling the effects of not being high and was waiting to hear from her dealer.

Behl said some drug court participants come to the program with bad attitudes simply because they’re in trouble.

A manager at the University Garden Apartments gave Hailey notice to vacate her apartment, No. 248. But when Hailey turned in her keys, she left behind a black and gray Igloo cooler.

Inside the cooler, according to police reports and court documents, were syringes, cotton swabs, a broken glass pipe that was burned on one end and small plastic cut-off baggies.

Next to it all was her Whitewater High School ID.

‘It gets me in more trouble’

Two weeks after her screams were felt throughout Reddy’s courtroom, Hailey was seated before him again—after serving time in jail.

“I admit that was completely immature of me,” she said. “I apologize for that. It was not appropriate at all.”

After Reddy asked if she should change her attitude, Hailey said an attitude won’t get her anywhere.

“It gets me in more trouble,” she said.

Some cognitive shortcomings can complicate recovery, according to a 2016 article from the Substance Abuse and Mental Health Services Administration within the U.S. Department of Health and Human Services. They include:

”The neurological effects of chronic substances use may significantly affect a client’s ability to remain abstinent and to manage other aspects of his or her life, such as developing a healthy lifestyle or recovering from a co-occurring medical or mental disorder,” the article states.

Back in March, Reddy began one of Hailey’s sessions by saying her “attitude is terrible.” That has been one of the intangible threads connecting her last five months in drug court.

A more tangible, recurring theme has been her GPS monitoring system strapped to her ankle.

On March 29, Hailey hung her head after Reddy said she needed more time with the GPS because she let it lose its charge. Back at her seat, she started to cry.

After the hearing ended, she said she would have preferred prison to the program if she did not have her son.

Two weeks later, and two weeks before her meltdown, she advanced to the next phase of drug court and got off the GPS. She was elated. In the hallway afterward, she shook her leg, still getting used to the free feeling.

“Thank you so much,” Hailey told Reddy excitedly. “Thank you.”

Hailey’s problems have been behavioral, not substance-related. She has not faced any drug-related sanctions in the program, and she credits her son with giving her the motivation to stay clean.

Young or immature drug court participants might struggle in the program because authority figures are telling them what to do, where to be and “how to essentially live their life,” Behl said.

“If you compound that with substance abuse in a program that’s very strict in telling you what to do, it can be that much more challenging to treat that population,” she said.

Hailey is the second-youngest person to start drug court. Another 19-year-old woman is still active in the program, and two others the same age but slightly older than Hailey eventually graduated from drug court.

The one man younger than Hailey was terminated.

Each participant gets a “how are you?” from the judge. Reddy once pretended someone got in serious trouble for a minor offense, only to break out in laughter.

The gallery in drug court, at times, feels like a high school cafeteria. Participants tend to sit in the same spot, and some crack jokes between proceedings.

Hailey tends to sit by herself in the first row on the right side of the courtroom. She’ll take her glasses, which have tape on them, on and off as she waits.

Those who are new to drug court sometimes let the door swing behind them. Hailey is usually there to reach out and stop it from slamming.

Hailey’s history is marked on the arms she uses to reach for the doors—the scars from her childhood pain and the track marks from heroin use.

“It contributes to who a person is and why they are the way they are,” Hailey said of her past. “We’ve all fought our own battles. Everyone’s different. Everyone’s fighting their own thing.”

Sitting in the hallway before a recent hearing, Hailey said drug court isn’t for everybody.

She believes she is mature beyond her years. She was forced to grow up early, and she said she is sometimes mistaken for being older.

Hailey’s only motivation for completing the program, she said, is the expungement of her felony drug charge. After police found the cooler left in her apartment, she was charged with possession of narcotics and drug paraphernalia.

Hailey has ambitions to be a certified nursing assistant, or CNA.

“I want to go to college for medicinal purposes. I can’t do that with a drug charge,” she said. “So it’s gonna be a while before I can even progress in life, I guess.”

“Like I work at freaking Burger King,” she continued. “Ugh, I hate it. I could be a CNA by now. I flip burgers for a living.”

At the end of July, Hailey showed up to drug court at 10 a.m. in her Burger King uniform, coming right from work. She can’t stand the word “Whopper,” she said, and doesn’t want to eat cheeseburgers anymore.

But she later told Reddy about how she and her co-workers go out to lunch on paydays. It provides her some social support, and it’s a positive event on her schedule.

“I don’t really have friends,” she said. “I felt normal (at the lunch). … Been a while since I felt that way.”

Reddy had good news and bad news. The bad news: Hailey would be on an alternative to termination agreement, so she is on a tighter leash than before.

The good news: She would be taken off GPS monitoring again.

“I haven’t seen you smile this much in a while,” Reddy said.

Hailey said the ankle monitor had become “like a part of me.”

It was Reddy’s last session in charge of drug court. Walworth County judges rotate every two years, and now Judge Daniel Johnson was taking over.

Before the participants applauded Reddy, he told them he wanted them to show up, try and be honest. He was rooting for them to succeed, he said.

Epidemic: Two Recent Gifts to Fight Drug Addiction Are the Exception, Not the Rule