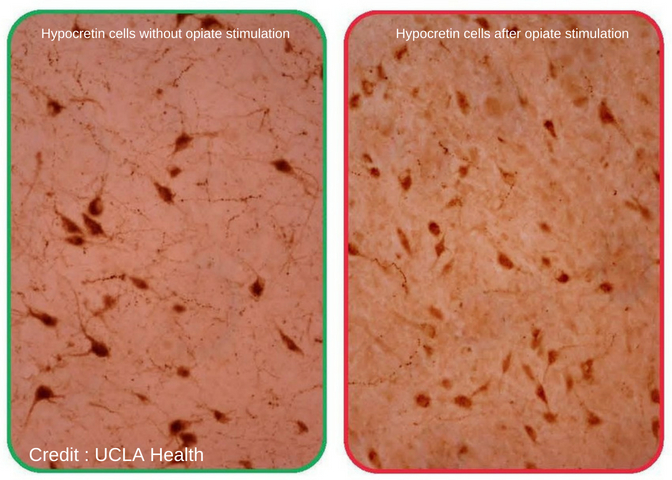 Studies conducted on passed heroin users brains and lab mice suggest an interesting connection to opioid users and brain stimulations that regulate sleep and addiction. Brain cells containing Hypocretin, also known as Orexin, are found within heroin addicted brains nearly 54% more than people without addiction. Hypocretin is a chemical messenger that moves the message of sleep between neurotransmitters alerting the body when it is time to go to bed. The study was conducted through the UCLA Health Sciences department.

High amounts of Hypocretin are to blame for the medical condition Narcolepsy, which effects almost 200,000 people a year but can go undiagnosed for years. A Narcoleptic brain is caused by a loss of almost 90% of the 80,000 brain cells that contain hypocretin. Most Narcoleptic people are diagnosed within childhood or later adolescence.

Hypocetins were increased from opiate use, which was found through tests on lab mice. Morphine was used in these tests, the active ingredient in heroin. Even minimal use had continued production of hypocretin in the mice, despite discontinuation of the drug. The increase of Hypocretin from using the opiates on the lab rats’ brains continued for over four weeks after the last dose.

The study showed drug effects from the opposite angle, how changes in hypocretin neurons were responsive to drug use, rather than the other way around. “It does suggest the possibility that part of the reason it’s so hard to get off drugs is there’s this massive change in the brain,” says study coauthor and neuroscientist Jerome Siegel of UCLA.

Researchers are now forming a hypothesis that morphine treatments may be able to raise hypocretin numbers back to normal levels, and reverse narcoleptic symptoms in humans. But much more research is necessary before it can be used as a treatment for human test subjects. They’re also looking into the possibility that excess levels of hypocretin cells, or blocking the action of hypocretin peptide multiplication, could make long term withdrawal from opiates easier and in turn, prevent relapse. Less addictive options need to be discussed before bringing more opioid treatments out into the health care field.