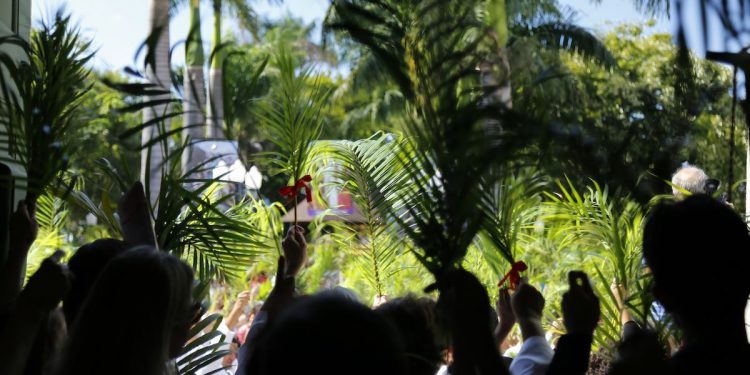 During a time of panic and fear, many could use a glimpse of hope. A Palm Sunday mass was held in a deserted church that gave chills to those that tuned in. Pope Francis announced to the young people not to be afraid to put their lives on the line for others amid the coronavirus pandemic. Usually, thousands are gathered to celebrate the holy day, with the traditional palms in the streets and masses dedicated to the sacred week ahead.

The Pope instead spoke in the presence of a small handful of priests, nuns, and smaller choir that filled the chapel with song all while maintaining a safe distance from one another. Their songs touched millions of lives that have been suffering. Together they all delivered a special mass to remember this time historically.

“Look at the real heroes who come to light these days: they are not famous, rich, and successful people; rather, they are those who are giving themselves to serve others,” he said.

“Feel called yourselves to put your lives on the line,” the Pope added. “Do not be afraid to devote your life to God and to others, it pays!”

Palm Sunday mass initiates the Holy Week, one of the most significant weeks of the Christian liturgical calendar which completes on Easter, next Sunday, April 12.

As of last week, churches and other religious facilities have been granted the ok to remain open, in over half of the states that are rated high alert. These states have enforced special exemptions to mandatory closures of nonessential businesses. However, out of the 15 states in the nation home to the highest percentage of especially at-high risk individuals, 11 were not holding religious gatherings as of Thursday morning.

Yet, it is not clear how many individuals are continuing to attend religious services or how many facilities have closed voluntarily or under the city and local orders. The White House is urging Americans to avoid all public gatherings of 10 or more until the end of April.

But the exemptions for religious institutions provide some obstacles to mitigation efforts such as social distancing that public health officials have said will save possibly 2 million lives if carried out “perfectly.”

The good news is that religious organizations, including the Mormon church and the leaders of Christianity Today, an influential evangelical magazine, have come out in support of suspending religious gatherings until further notice.

As of Friday, the CDC is no longer reporting the number of people under investigation (PUIs) that were already tested, as well as PUIs that have tested negative. Now that states are testing and reporting their results, CDC’s numbers are not representative of all testing being done nationwide.