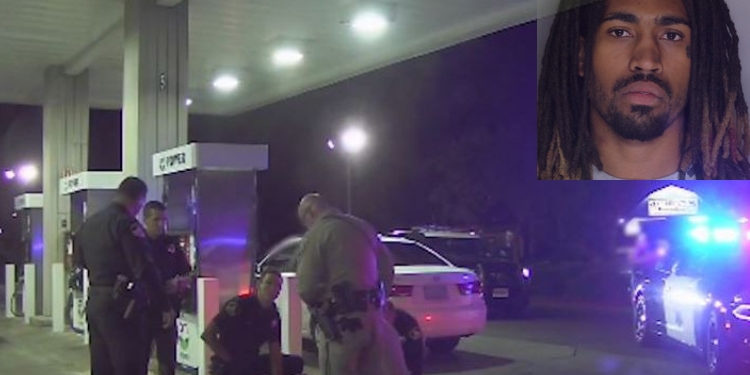 This week Authorities have released a full-length video of the arrest that involved an in-custody death of a suspect back in November. Police got a call from multiple businesses of a man jumping on cars and ripping off windshield wipers near the Watt Avenue and A Street in North Sacramento back on October 28th.  The suspect was later identified as Marshall Miles who was found and detained.

The booking process was a struggle according to the officers at Sacramento County Jail. Deputies claim Miles struggled with them and was uncooperative.

The 46-minute video captured the crucial moments before Miles death, with a scene shot by a hand-held camera shows how officers put restraints on Miles and carry him by his arms and legs, commanding him to stop struggling. In a cry for help, you can hear Miles yell, “I cannot breathe,” and at one point shouts “Give me some air.”

An officer replies, “you’re breathing fine,” as he struggles to contain him. They end up ultimately hogtying his ankles and wrists together behind his back.

The suspect was then put in a jail cell, and later found unresponsive. Officers, medical staff and fire department personnel administered first aid and was then taken to the hospital. “Compassionate release” was granted by the sheriff’s departments custody allowing loved ones to visit him.

The suspect was pounced dead November 1st, toxicology reports show Miles had meth, cocaine, ecstasy, and marijuana in his system during the incident

According to the Sheriff’s Department, all the videos were “minimally redacted” to protect the privacy of the people involved.

“The Sacramento County Sheriff’s Department recognizes the significance of this incident and is committed to transparency and communicating openly with our community,” the department wrote in a release.

A full autopsy is still being completed, while the incident is still an ongoing investigation as an in-custody death for reporting, evidence collection and preservation, and analysis purposes.

Sheriff Scott Jones is under great pressure after months of withholding the videos. He has previously refused to release footage of officer-involved shootings and other incidents. Shaun Hampton, Sacramento’s Sheriff Sgt. explained how the release was part of a policy the department has yet to finalize but that it has been working on for months.

He added “The is the direction the Sacramento Sheriff’s department is moving in the future,” sharing how the department plans to release all video in major use-of-force incidents, in-custody deaths, and officer-involved shootings. He also assures the public the video released contains all the video they have of Miles incident.

Many believe the video release marks the most progressive move to date by sheriff’s officials to provide transparency about a major incident involving deputies and arrest.

The Sheriff’s department is making efforts to purchase a reduction software and additional software to allow for more public video releases and access. Hampton, however, is not clear on how the policy will exactly work and did not want to compare it to the one followed by the Sacramento Police Department, which now releases as a matter of routine all video in officer-involved shootings and other major incidents.