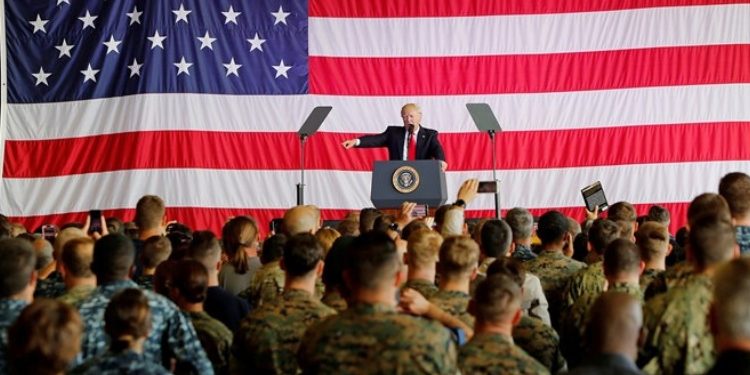 Data that was released this week reveals that the Pentagon has spent almost $8 million to attend to the need of more than 1,500 transgender troops since 2016, which included 161 surgical procedures.

It states that as of Feb. 1 1,071 members of the armed forces have been diagnosed with a condition known as gender dysphoria ranging from the Army, Navy, Air Force, Marine Corps, Coast Guard and Public Health Service on active duty and in the reserve force.

According to the data many of them are senior enlisted personnel; however, there are 20 recorded senior officers-lieutenant commanders and higher.

In the end, the number of transgender troops only represents a small fraction of the total 2.1 million members. Although, the number of people who sought treatment elsewhere is not known.

The hot topic of transgender troops and their medical and psychological well-being has been a controversial issue since Trump took to Twitter, tweeting, that he wanted to ban them from the military. January 2017 the Supreme court reviewed the issued which ruled that a modified ban could take effect in the future, the however lower court continues to challenge the topic.

Today, the House Armed Services Committee will hear multiple testimonies on the military’s policy, which aims to ban most troops diagnosed with gender dysphoria.

The data shows that the Pentagon back on July 1, 2016, when the Obama administration removed the ban on service for transgender troops and allowed them to seek treatment publically. Since his lift 1,524 soldiers have been diagnosed with gender dysphoria; “active-duty force there were 500 in the Army, 442 in the Navy, 354 in the Air Force, 101 in the Marine Corps, 33 in the Coast Guard and four in the uniformed Public Health Service. And 90 service members served in the reserves.”

Throughout that time the cost of treating troops with the gender dysphoria has totaled $7,943,906.75, which included 22,992 psychotherapy visits, 9,321 hormone prescriptions, and 161 surgical procedures. The report shows 103 breast reductions and mastectomies, 37 hysterectomies, 17 “male reproductive,” and four breast augmentations. Clinical visits totaled up to $5.8 million while surgery cost more than $2 million.

The Pentagon’s budget was $716 billion this year. Former Pentagon’s top personnel official and an architect of the Obama-era policy announced Wednesday that despite the millions of dollars spent on transgender issues is smaller than they expected, as is the cost of treating them, noting that the Pentagon spends $50 million per year on health care.

The small number of transgender troops also leads people to believe that recruits are not joining the military at the numbers they thought.

“We need every qualified patriot willing to serve in our armed forces,” said Air Force Lt. Col. Carla Gleason, a Pentagon spokeswoman. “The 2018 update to the 2016 policy is not a ban on transgender service members; it is a policy on gender dysphoria. Any currently serving transgender service member with a diagnosis of gender dysphoria will remain under the 2016 policy. Any new policy will not apply to those individuals.”

The hearing is scheduled at the House Armed Services Committee’s Panel on personnel, overseen by Rep. Jackie Speier, D-Calif.