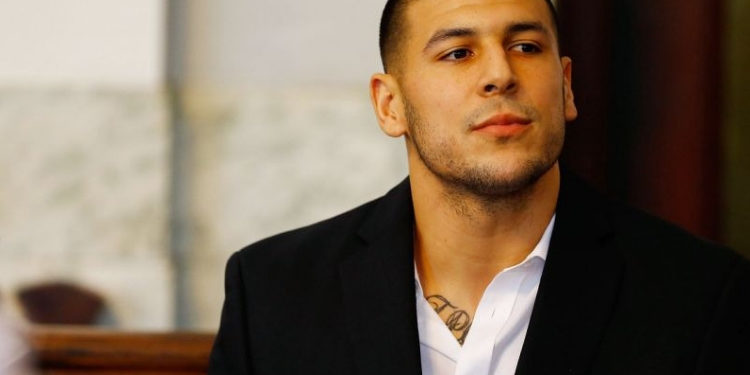 The former New England Patriots tight end Aaron Hernandez was 27 years old and serving time for first-degree murder at the time of his suicide. He hung himself at the Souza-Baranowski Correctional Center just days after he was acquitted in another trial for a double shooting homicide. While in prison State investigators concealed the degree of Aaron Hernandez’s K2 drug use in prison prior to his suicide- information that was kept in public records and from his family and lawyers.

During an interview between The Glove Series and an inmate days after Hernandez’s’ suicide said, “”Well he’s spent the last two days smoking K2 in his cell and he wasn’t in the right frame of mind.” “That shit is [expletive] all these young kids up.” “They aren’t going to stop no matter what happens in here.” Noted by the Globe, it’s a significant statement hopefully bringing a new focus to Hernandez’s mental health as well as the overall state of the prison.

Five days earlier prior to his shocking suicide, he’d been found not guilty in the shooting deaths of two men in Boston back in 2012. Hernandez had already been in Souza-Baranowski Correctional Center for murdering an associate, Odin Lloyd, in 2013.

Department of Correction spokesman Jason Dobson revealed the inmate’s interview was blacked out due to information dealing with an ongoing investigation into drugs at the prison. “A separate investigation was ongoing into suspected inmate drug activity [at the prison, the section was redacted so as not to compromise that investigation.”

According to the Center on Addiction “K2” known as Synthetic marijuana is a mixture of industrial chemicals intended to mimic the effects of THC, the naturally occurring active compound found in marijuana. Synthetic marijuana use can lead to side effects like rapid heart rate, vomiting, agitation, and hallucinations. Many inmates will use K2 in prison as their drug of choice because it’s tough to detect in tests and has been easy to smuggle in jail.

The case of Hernandez drew national attention as the only active NFL player to be on trial for killing three people. During an autopsy, he was found to have one of the most severe cases of CTE — chronic traumatic encephalopathy — for someone of his age. The brain disease is known to lead to poor judgment and lack of impulse control, among other behaviors-link indirectly with football. Toxicology tests were given by an outside laboratory, NMS Labs of Willow Grove, Pa.

Two weeks after Hernandez’s death, May 4, 2017, the State Police released a report stating that a “postmortem toxicology of Hernandez’s blood came back negative for all substances tested to include synthetic cannabinoids,’’ leading them to close the case. Spokesmen for the state’s Executive Office of Public Safety and Security, Felix Browne, refused to comment on how thorough the toxicology results were, explaining the examiner does not by law release case-specific details to the public. Although documents detailing his alleged K2 use have not been made public until now.

Hernandez’s cell where he was found was filled with eerie religious writings and symbols. Walls covered with religious writing. He wrote 3:16 in blood on his forehead and had the Bible citation “John 3:16” open on his desk. John 3:16 “For God so loved the world that he gave his one and only Son, that whoever believes in him shall not perish but have eternal life.”Gerard Breau, the guard on duty the night Hernandez killed himself, was cited for misconduct. He skipped his nightly 2 a.m. round, to find Hernandez hanging at 3:03 a.m.

Lawyer George Leontire said the Department of Correction’s hiding of the K2 allegations “was a further attempt to cover up wrongdoing.”