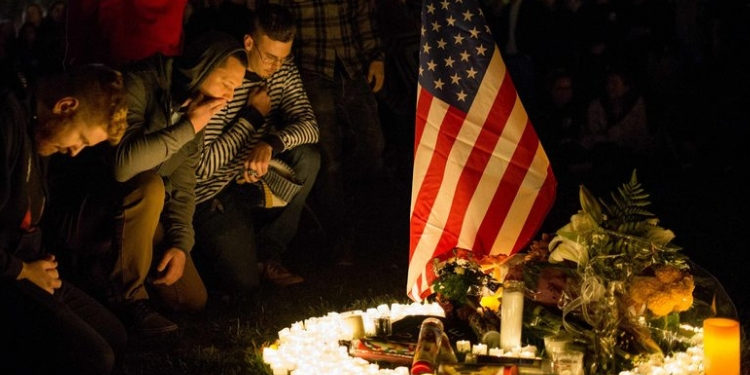 Thousand Oaks faced one of its most tragic nights when a gunman killed 12 people at a country music bar. According to law enforcement officials Ian David Long went on social media during the attack and posted about his mental state and whether people would believe he wasn’t sick.

Investigators also are looking into whether the gunman’s former girlfriend would be at the bar that night. Although they have little information authorities have not yet determined a motive for Wednesday night massacre at the Borderline Bar & Grill.

The officer who was briefed on the investigation but not authorized to release any information to the public. He spoke to The Associated Press on condition of anonymity not giving any details on what the 28-year-old former Marine posted on his Facebook and Instagram accounts. The two social media sites had no immediate comments.

According to documents obtained by ABC News show Long posted on social media at 11:24 p.m. saying, “It’s too bad I won’t get to see all the illogical and pathetic reasons people will put in my mouth as to why I did it. Fact is I had no reason to do it, and I just thought… f***it, life is boring so why not?”

Then, at 11:27 p.m., he posted, “I hope people call me insane (2 smiley face emojis)…wouldn’t that just be a big ball of irony? Yeah… I’m insane, but the only thing you people do after these shootings is ‘hopes and prayers’… or ‘keep you in my thoughts’… every time… and wonder why these keep happening… (2 more smiley face emojis).

The former machine gunner who served terms in Afghanistan opened fire during a college night at the bar, then proceeded to kill himself as swarms of police officers closed in. The investigators in charge of the case are still working to figure out what set him off. President Donald Trump blamed mental illness and described Long as “a sick puppy” who had a lot of problems.

Authorities have not commented on whether mental illness played a role in the killings. Although mental health specialist who examined long after police were called last spring due to his agitated behavior, worried he might be suffering from PTSD. Police were called out to longs house last April when one of the loud and repeated fights he had with his mom-who he lived with- had gotten so bad the next-door neighbor had to call the police. The doctors who examined him concluded there wasn’t a reason to have him involuntarily committed.

The lives lost Wednesday night included sheriff’s Sgt. Ron Helus, a 29-year veteran gunned down as he was the first on the scene, and Telemachus Orfanos, 27, who survived last year’s massacre in Las Vegas, where a gunman in a high-rise hotel opened killed 58 people. The attack is being described as military efficiency, meaning none of those injured were hurt by gunfire, but instead when Longshot, he killed.

His neighbor Julie Hanson who lives next door to the home that Long shared with his mother told reporters Ian was very “odd” and “disrespectful” way before he left home 10 years ago to marry his wife and enlist in the Marines. Several months ago, unusual loud banging and shouting led her husband to call the cops even though yelling and screaming was often herd. Her husband Tom Hanson said, “I was concerned because I knew he had been to the military.”

According to Marc Bender, an instructor for emergency responders in Riverside County California, “Every Marine is trained in urban warfare and indoor gun fighting, every marine is a marksman.